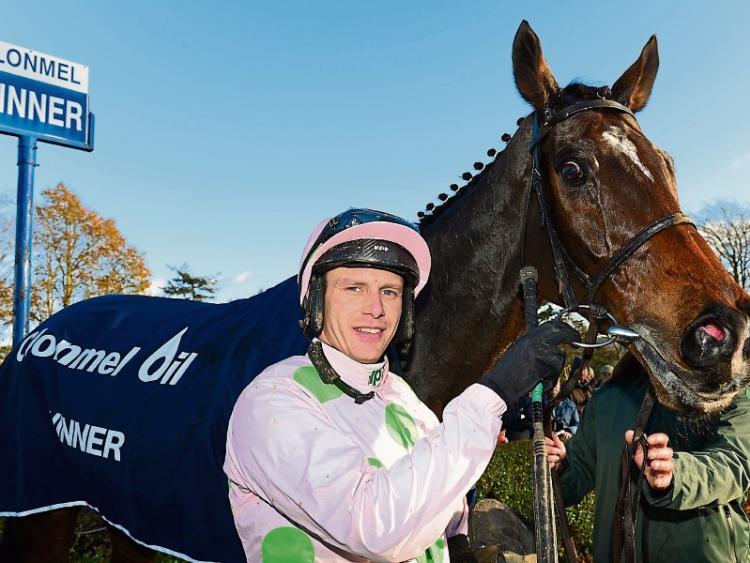 Douvan, with Paul Townend, after winning the 2019 Clonmel Oil Chase. The trainer/jockey combination of Willie Mullins and Paul Townend are expected to have a big say in this year's race next Thursday

Powerstown Park, Clonmel had the unfortunate honour of hosting the last horse race meeting in Ireland before the first of the Covid-19 lockdowns in March.

Clonmel’s entire summer programme, including the popular barbecue evening in June, was lost to the virus.

Thankfully, racing did resume at the venue in September, with very strict health screening checks and Covid-19 protocols in place.

However events are taking place behind closed doors with access restricted to officials, jockeys, trainers, grooms, medical and veterinary personnel and track employees.

Never will the public be missed as much from the races at Powerstown Park as when the Clonmel Oil Chase takes place next Thursday, November 12.

First run in 1992, and known as The Clonmel Oil Chase since 2003, the race has an illustrious roll of honour, with two Cheltenham Gold Cup heroes in Imperial Call and War Of Attrition and two Champion Chase winners in Edredon Bleu and Sizing Europe among those to have used the race as part of their build-up to success at the highest level.

The two most recent winners, Kemboy (subsequent winner of three Grade Ones) and the brilliant Douvan were also household names.

And even the ever-popular Aintree Grand National hero Tiger Roll took his chance in the 2017 renewal, which was won by Alpha Des Obeaux.

Final declarations for this year’s race will be known on Tuesday and it is expected that all the top National Hunt trainers will once again field a formidable challenge for the biggest pot of the year at Clonmel.

One very positive story to report from the racecourse is that this year’s Clonmel Oil Chase will be covered live by ITV4 Racing for the first time.

Four races from Clonmel, including the feature race, and four races from Taunton racecourse will be included in the channel’s racing coverage that day.

Speaking to The Nationalist, Eugene Cooney, marketing manager at Clonmel Racecourse said “I am extremely grateful that, in a tough year for all businesses, Clonmel Oil are sponsoring our Grade 2 chase for the 18th consecutive year.

“I know that Sean Connolly (Clonmel Oil) enjoys this day so much in the company of his family, work colleagues and customers and unfortunately 2020 will be very different.

“However Racing TV and ITV4 will bring the spectacle of the Clonmel Oil Chase into homes throughout Ireland, UK and even further afield, and we are looking forward to a great race on November 12.”