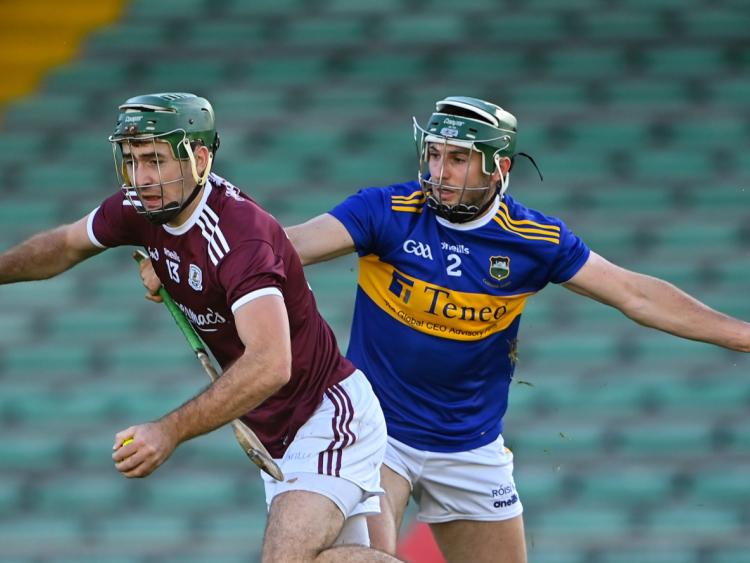 Tipperary surrendered their All-Ireland hurling crown at the LIT Gaelic Grounds in Limerick on Saturday, their campaign hitting the buffers when they were beaten by Galway in this closely-fought quarter-final.
It was a game of what ifs for Tipperary, none more so than the question to which there will never be an answer - what if Cathal Barrett hadn't been sent off for the last 22 minutes (including additional time), after he received a second yellow card in the 52nd minute.
That incident will be part of the wider regrets for Tipperary, who remember were six points ahead five minutes into the second half.
They were two ahead when Barrett received his marching orders, with a significant chunk of the game remaining.
However even in defeat the collective effort, even with 14 players, was nothing short of heroic, one that did justice to the county's very best traditions on this the 100th anniversary of Bloody Sunday.
After Barrett's sending off, Joe Canning pulled Galway closer from a free, only for Jason Forde to follow suit at the other end.
Two more Canning points, from a sideline and a free, erased Tipp's advantage. But they never gave up, Willie Connors restoring their slender lead.
In a tension-filled finale, they even went two ahead thanks to Ronan Maher's long-range free.
However the crucial score came at the other end in the 66th minute, when Aidan Harte drove a low bullet to the net.
And still Tipp responded, stubbornly refusing to give up the ghost. Points from Dan McCormack and converted frees from Brian Hogan and Seamus Callanan kept the All-Ireland dream on life support.
But Harte's goal and the numerical disadvantage exacted a heavy toll.

With Tipperary attempting to reach a sixth All-Ireland semi-final in seven years, their marvellous effort fell just short, with Joe Canning copperfastening the Galway victory with a late converted free.
To a man Tipp gave it everything. Noel McGrath was very much on song in the first half, scoring four points from play.

Seamus Callanan issued a timely reminder why he was last year's Hurler of the Year, scoring 1-2 and running himself to a standstill when their numbers were reduced.
Alan Flynn, Jason Forde, Bonner Maher, Padraic Maher, Dan McCormack and Ronan Maher were others who made their presence felt at various stages.
Galway will be eternally grateful to Joe Canning, Cathal Mannion, Brian Concannon, Cathal Mannion and Gearoid McInerny for helping them get across the line.
With the heavy underfoot conditions making it difficult for players to stay upright, Tipperary led at the break by 2-13 to 2-9, thanks to a highly productive five-minute spell from the 30th minute, when they reeled off 1-4 without reply.
They were three points in arrears when Noel McGrath and Jason Forde points edged them closer. A move constructed by Padraic Maher, Noel McGrath, Brendan Maher and Bonner Maher ended with Alan Flynn equalising with his second point of the afternoon.
And they weren't finished. As they continued to flow freely Jake Morris and Bonner Maher both had efforts blocked before Bonner Maher finished the rebound to the net in the 33rd minute, and when Michael Breen followed up with a point they were ahead by 2-12 to 2-8.
Joe Canning, from a free and Niall O'Meara exchanged further scores, leaving Tipperary with that four-points cushion at the midway stage.
Tipp had started the brighter and had a goal from Seamus Callanan in the fourth minute, brilliantly executed when he got on the end of a Jason Forde delivery.
Galway hit back strongly however, and were level by the 11th minute (1-3 each), when Cathal Mannion beat Brian Hogan at his near post.
Galway had a second goal in the 18th minute when Conor Cooney and Conor Whelan combined to tee up Brian Concannon.
A Joe Canning free had Galway four clear by the 21st minute but in a first half that was very much touch and go Tipp gradually regained control.
Tipperary: Brian Hogan (0-1 free), Cathal Barrett, Ronan Maher (0-1 free), Alan Flynn (0-2), Barry Heffernan (0-1), Brendan Maher, Padraic Maher, Noel McGrath (0-4), Michael Breen (0-2), Dan McCormack (0-2), Niall O'Meara (0-1), Patrick Maher (1-0), Jason Forde (0-6, 5 frees), Seamus Callanan (captain 1-2, 0-1 free), Jake Morris (0-1).
Substitutes: Willie Connors (0-1) for Patrick Maher (51 minutes), John McGrath for Noel McGrath (53 minutes), Paddy Cadell for Niall O'Meara (59 minutes), Paul Flynn for Jason Forde (65 minutes), Mark Kehoe for Dan McCormack (73 minutes).
Galway: Eanna Murphy, Aidan Harte (1-0), Daithí Burke, Shane Cooney, Fintan Burke, Gearoid McInerny, Joseph Cooney (0-1), Padraic Mannion (captain), Johnny Coen (0-1), Joe Canning (0-14, 12 frees, 1 sideline), Cathal Mannion (1-3), David Burke, Brian Concannon (1-0), Conor Cooney (0-1), Conor Whelan (0-1).
Substitutes: Adrian Tuohey for Johnny Coen (half-time), Jason Flynn (0-1) for David Burke (half-time), Sean Loftus (0-1) for Fintan Burke (58 minutes), Evan Niland for Conor Cooney (58 minutes), Darren Morrissey for Shane Cooney (71 minutes).
Referee: Johnny Murphy (Limerick).