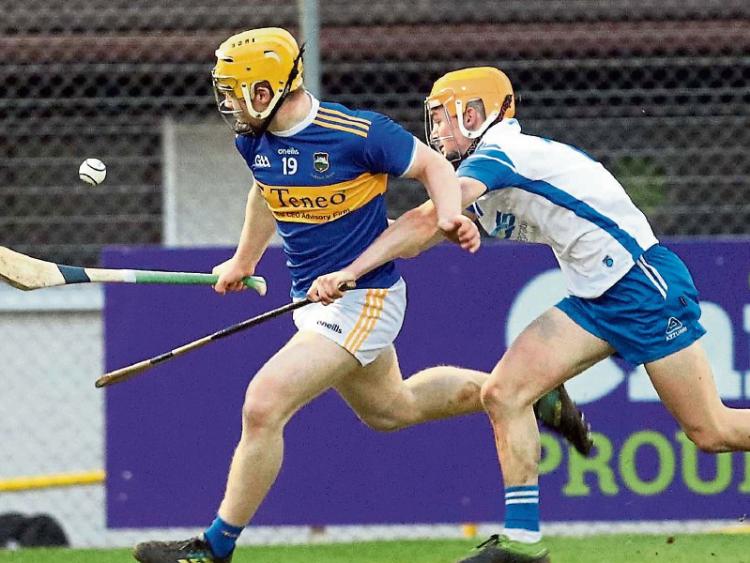 David Fogarty is on the move for Tipperary in the win over Waterford in the Munster minor hurling championship semi-final in Cork. Tipp will meet Limerick in this Sunday’s final at 1pm

It won’t go down as a classic All-Ireland final – they seldom are classics - but that will hardly bother Limerick, who added another notch to their growing reputation as the dominant hurling force of the moment.

Keeping their best wine ‘till last, Limerick hit Waterford with a power play that  the Deise just couldn’t handle. Spearheaded by the twin towers, Morrissey and Hegarty, Limerick did the hurling version of a boa constrictor. It was death by suffocation.

In advance one felt that Limerick were grinding out victories on their way to the final rather than embellishing the wins. If they stayed at that level and if Waterford could improve on their Munster final form then this might just be a tight-run affair.

But those were mighty ifs and neither came to pass. Limerick soared way beyond Munster impressions and Waterford probably dipped slightly. The end consequence was an eleven-point gap.

Underdogs need a smile from the gods and when Jack Fagan flashed that early opportunity outside Nicky Quaid’s right post it was an early omen of the day’s fate. The injury to Tadhg de Burca was another cruel imposition on the outsiders, another hint that the fates were playing mischief.

Waterford did create several goal chances - but took none.

Limerick created fewer goal opportunities but their pointing was relentless. Kilkenny at the peak of the Cody years would mercilessly fillet opponents with a few rapid-fire goals; by contrast Limerick’s method is slower, a more lingering type of death by a thousand cuts – or thirty cuts in Waterford’s case.

Much modern-day punditry across all media forums irritates me, so I’m delighted to include the following from Vincent Hogan’s piece on Monday: ‘Even in this age of science and systems and tactical trigonometry, hurling is still first and foremost a game of the heart. That gets broadly lost in some analysis.’

The only amendment I would make there is to substitute most analyses instead of some. Much of the modern punditry you read and hear from ex-players is bluster dressed up in the finery of jargon to try and sound sophisticated. It does hurling a disservice.

Hogan is right. At its core hurling is still a visceral battle for dominance. Roy Keane, in his biography with Dunphy, spoke ad nauseum about how at Manchester United in his time they’d dominate opponents first and then let their football skill finish the business. It was why, he claimed, most teams at that time were beaten once they entered the gates of Old Trafford.

If it’s true in soccer then it’s even truer in a physical collision like hurling. On Sunday Limerick physically dominated Waterford and then their hurling did the rest.

In the physical stakes they have developed a scary capacity to boss opponents. It’s helped by the size and conditioning of the players, an aspect epitomised by  Hegarty and Kyle Hayes, the Morrisseys and others. These are big bodies, able and willing to use that heft to subdue opponents.

But the physicality and athleticism alone won’t win hurling All-Irelands. It has to be matched by skill and this Limerick team has that too in abundance. Some of their point-scoring, especially in the first half, was off the scale of brilliance.

So here you have a formation that’s brawny, brave and brilliant, one that has a pack mentality when hunting down opponents. They simply smothered the life out of Waterford and then let their hurling do the rest.

So where do Limerick sit then in the historical scheme of things? I’m of an age to have seen the Limerick win of 1973. I can still recall where I sat in the Old Stand at the Munster final as Richie Bennis pointed that controversial seventy - as it was then in imperial measurements. That Limerick team of the 70s was powerful and deserving of their All-Ireland win but they don’t compare with the modern group.

What John Kiely has done with this generation is remarkable. Two years ago they made the breakthrough, with a few wobbles along the way. Nicky Quaid had to sail to the rescue against Cork and Seamus Harnedy and even in the final they looked a bit unnerved as Galway’s comeback almost undid them.

There was a wobble last year too but this time it was all so much more assured. It’s as if the project has moved on a notch and now there’s more certainty in every action. Perhaps it’s the weight of history being lifted from their shoulders and they sense domination.

The evidence is clear. Back-to-back Munsters and leagues have now been franked by a second All-Ireland in three years. That record doesn’t lie.

I would, however, insert a word of restraint here. The media loves hyperbole. Already we’re listening to talk of a new hurling dynasty and of comparisons with Cody’s Kilkenny.

Whoa there, hold the horses! Remember Limerick won a tight All-Ireland semi-final by three points against a Galway team that lost two key men through injury. The margin in the Munster final was four points. That’s far from world domination. In time, maybe, but for the moment Cody’s legacy is unchallenged. 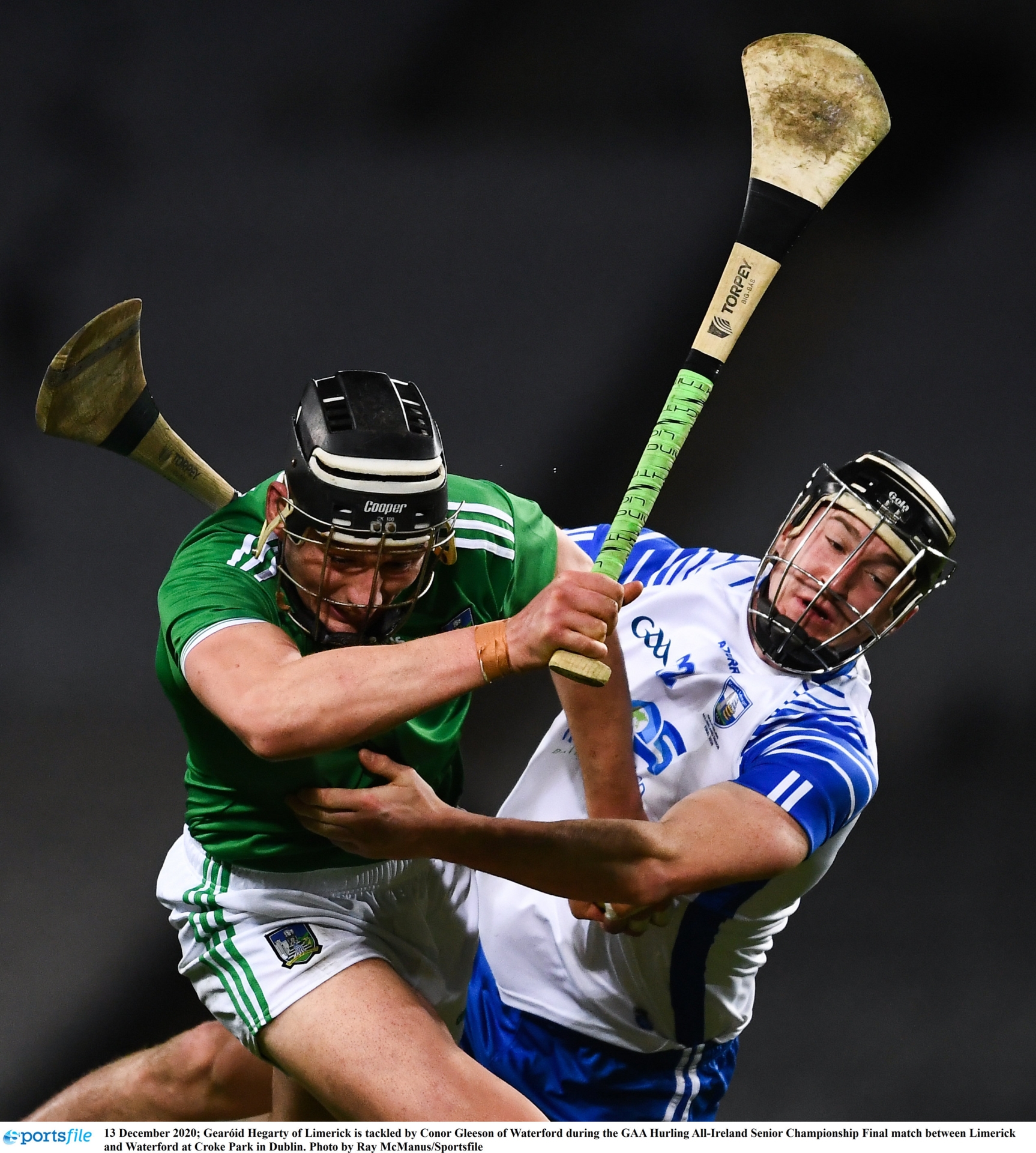 A word on Waterford. The final shouldn’t, and won’t, define their year. Under Liam Cahill they’ve made spectacular progress while coming from a very low base. In the final they met a team playing its best game of the year and they were luckless in their endeavours.

Cahill isn’t one to squander the progress but he’ll be acutely aware too of the areas that need immediate addressing, such as the physical aspect where they were found wanting.

So, the curtain falls on the strangest of All-Ireland championships. Limerick will be seen as the template now for others to follow in terms of physical preparation. Others will copy, the Shannonsiders will now be the target and as ever ‘uneasy lies the head that wears the crown’. Already 2021 seems just around the corner.

One lesson surely from championship 2020 is the desirability of having some sanction to address cynical fouling, which has now become endemic in the sport. Near the end of the game on Sunday Stephen Bennett was haring in on goal and Will O’Donoghue took one for the team.

It was just one of many such fouls we’ve seen in this year’s shortened championship, and as long as it remains profitable it will continue to be a blight on the sport. Most managers in the past have argued against any change to the rules but by now their case has become swamped by overwhelming evidence. Now is the time for action.

Some action too is surely needed to tackle the number of unpunished infringements in the game. As things have got more crowded and competitive in the middle third especially there’s a lot of stuff going unpenalised and it’s not pretty. This guff about letting the game run is part of the problem.

Finally, The Sunday Game has decided to realign team formation, with two full forwards and three midfielders on their team of the year. Maybe it was a neat trick to avoid a decision between Cian Lynch and T.J. Reid for number 11.

Either way it’s just playing silly beggars with team sheets. The two-man full forward line usually means a sweeper behind the half-backs so why not have four half-backs rather than three midfielders. Yet more silliness from the pundits.

In the meantime, the underage championships continue on their merry way this Yuletide, with Tipperary’s minors and U20s in action this week.

The minors did enough to see off the Deise in the Munster semi-final last Saturday at Páirc Uí Rinn. Thank goodness for streaming, even if getting logged on initially was problematic.

I’d regard the win as an adequate performance rather than one to get overly excited about. The team started brightly but then Waterford, with a Holycross manager in Darragh Duggan, enjoyed a lot of possession before Jack Leamy had Tipperary’s first-half goal.

That gave the team a cushion before Waterford again came strongly into it in the second half. It wasn’t until substitute, Kenny Lee, grabbed the second goal near the end – a well-taken score too – that the issue was put to bed.

It finished a sweet seven-up for Tipperary. Clonoulty goalie, Jason O’Dwyer, played a key role with a few useful saves in a match that could have tilted either way.

They now face Limerick in the final this Sunday. It’s a Limerick set-up that had a dozen to spare over Cork in the other semi-final, where many commented on the size of the Shannonsiders. Now where have we heard that about Limerick before?

There’s no doubt Limerick’s senior win will be a boost to these U17s, the feelgood factor alone lifting morale.

Against Cork the tipping point was two Adam English goals just before half time. Now that’s a name we’ve heard before from his involvement with Doon in schools’ competitions. He’s one to watch, with strong Tipperary and Limerick pedigree in his background.

That victory over Cork, and its emphatic nature especially, will have Tipperary forewarned about the task that lays ahead.

Let’s hope the team rises to the challenge in a grade where we’ve disappointed since the 2016 All-Ireland win.