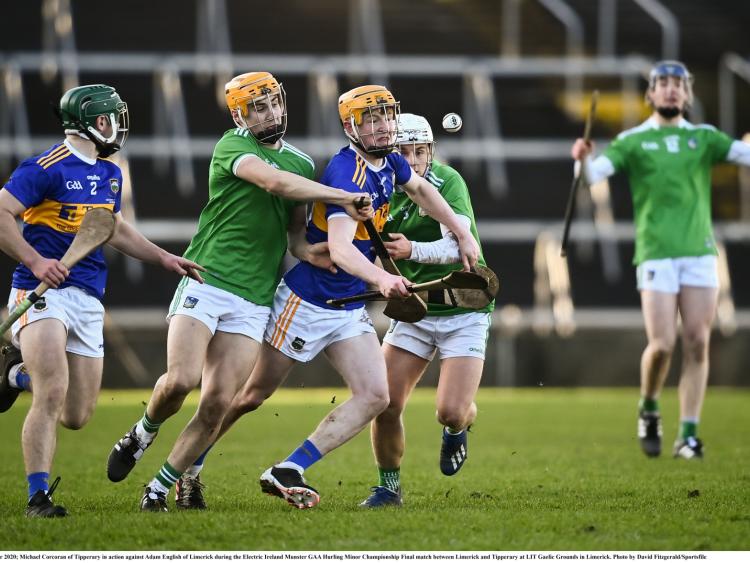 Our minors take centre stage this week, on and off the field.

On the one hard, our hearts must go out to our youn

g hurlers who played their hearts out in the Munster Final against Limerick on Sunday last, but lost out in extra time.
And, on the other hand, Convention has introduced a championship in Tipperary in the u19 grade and the u21 grade to go along with the new u17 grade.

The decision of delegates - there were few enough offering an alternative view apart from officials who will be charged with trying to run the competitions - means that there will be considerable fixture headaches when it comes ot trying to find dates for these competitions. Granted, the argument for introducing and u19 championship to bridge the lengthy gap between u-17 and u21 would appear to be a good one, but seriously how is it going to work. There will definitely be conflicts between the grades and the job of the fixtures delegates will be a very difficult one.

CCC Secretary Tom Maher pointed out to delegates that it is likely that players will tog out in u-17 on Monday, u-19 on Wednesday and in the adult grades at the weekends, before starting all over again. How long can that be sustained, one wonders?
Back to the minors. Paul Collins' men have endured a most difficult campaign which was truncated by Covid, started, stopped, started again and eventually played out, with an extra time final defeat leaving them in a desperate state at the final whistle on Sunday.

Along they way they had their fair share of misfortune too - they took to the field on Sunday minus two key defenders, and then lost their goalkeeper and full back in a collission, before seeing two other players leaving the field with injury before game end.

But, did they allow the setbacks to affect their attitude? No, they did not. They battled and battled and even the concession of two goals at crucial stages in the match, didn't deliver the knockout blows. Instead, those blows came in the second period of extra time when tiredness got the better of the Tipp lads and the fancied Limerick lads eventually found their mojo.
Hats off to the Tipp lads though - they might not have won the silverware, but they certainly made people sit up and take notice of them. They have progressed to the stage of county minor - now the challenge is for them to develop further and step to the next level.

Rocking to Cashel
So, Ryan O'Dwyer is returning to his native Cashel King Cormac club which has also voted to accept the high profile transfers from Knockavilla Donaskeigh Kickhams. There'll be some competition for places in that club by championship time - some players will be left discommoded and that's when trouble really starts.

The whole debate about the strength and dominance of the Dublin senior football team, having completed six-in-a-row, is in full swing right now with many pointing to the massive resources being put at their disposal.

Yes, it is true that Dublin GAA have indeed huge resources and that their players want for little or nothing. However, the same can be said about the Capitalists hurlers and they don't enjoy the level of dominance their footballers enjoy.

If you were asked right now to name the four All-Ireland semi-finalists for the 2021 championship you'd probably have any of the following six in the mix - Limerick, Kilkenny, Tipperary, Waterford, Clare and Galway. No Cork? No Wexford? And, almost certainly no Dublin right now. Perhaps a few years ago, one might have been tempted to have a punt for them, but the Dubs hurlers fortunes have diminished in recent times - their victory over Galway in last years championship though did have a major bearing on the destination of the Liam MacCarthy Cup.

So, if the hurlers of Dublin and their footballers are on an equal footing in terms of resources, why is there such a disparity in terms of success?

One argument to be made is that the football teams of other counties have simply not made the jump up in terms of class in order to compete with Dublin. They have not found a way to out-think Dublin and as a result the Blues juggernaut just continues to roll on and on relentlessly.

When you think about it, what exactly have Mayo done differently to try and counter the fact that they have consistently lost to Dublin in all of those high octane games? To be fair to them, they are the ones who have consistently come close to beating Dublin, but still they have not achieved that. But, what have they done differently? How have they tried to change the record?

Take a look at the others - Kerry, beaten on the hop by Cork. Donegal, beaten on the hop by Cavan. Tyrone? Galway? Monaghan? Derry? Armagh? Meath?
None of them have managed to be consistently in the right frame of mind to really challenge Dublin and until such time as that changes, their dominance will continue.

When Kilkenny dominated the hurling scene, there were opponents aplenty to try and knock them off their perch. Tipp did it more than anyone else, but there were tests for them too in the form of Galway, Cork, Clare and at one stage Dublin. Limerick and Waterford also had their goes as did Wexford, but they failed to mix it with the big boys at the time.
Just like Kilkenny on the hurling scene, Dublin's football dominance will eventually come to an end too and others will take up the mantle. For now though, we just have to admire a super achievement and team.