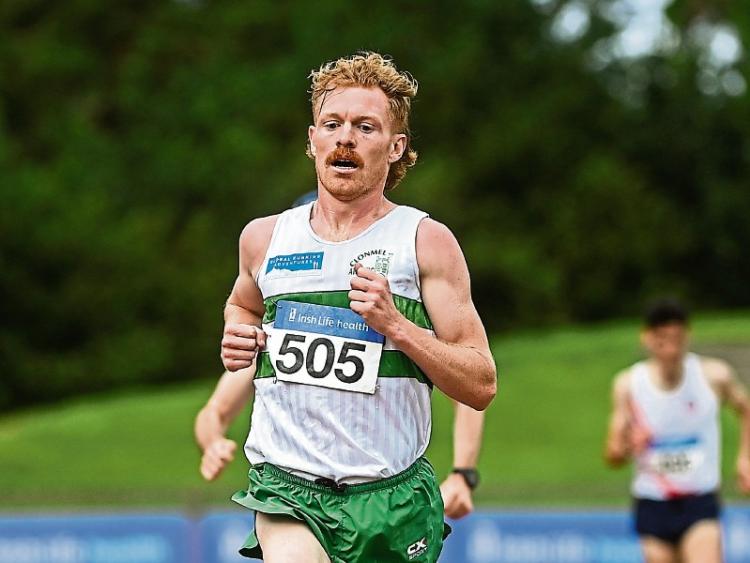 He crossed the line in a new record of 28 minutes, 30.91 seconds, which was the fastest time for the distance by an Irish athlete since 2009 when Martin Fagan ran 27.58.48 in California.

The Clonmel athlete, says Clonmel Athletic Club PRO Niall O’Sullivan, had been “training away on the byways, highways, Blueway and track in his home town for the past couple of months, aided by a small group of local athletes when the lockdown lifted.”

Right from the start in Belfast he was in the leading group of three athletes, who were his training partners at the Dublin Track Club.

As they approached the five-mile mark, Sean Tobin increased the pace and that soon saw him draw clear of the chasing pack, as he reeled off laps of 66 seconds.

At this stage he was full of running as he approached the bell in 27 minutes, 28 seconds.

This was a whopping 65 seconds improvement on his national 10,000 metres title winning time last August.

“More noted as a miler, Sean has moved up in distance and last Saturday in Belfast he produced the kind of performance we all knew he was well capable of on the track over this distance,” says Niall O’Sullivan.

“He has competed in very few 10,000 metres races on the track. But each time he has, he has lowered his figures in spectacular fashion.”

This performance by Tobin is now the 17th fastest time by an Irish athlete.

“Now four months later during a pandemic he produces this spectacular performance, it speaks volumes about the man,” says Niall O’Sullivan.

“It is worth noting that Sean ran the second half of this race faster than the first half and that in itself is a brilliant achievement.”

This set him up for the national senior track championships in August when he won the 10,000 metres title, as well as winning the silver medal in what was “the race of the decade,” the 1,500 metres.

In September he paced the first four laps of the 3,000 metres at the Rome Diamond League meet, where the top six finishers all set personal bests, with four of them setting national records. All were full of praise for the way Sean set them up for such performances with an even pace of 60 seconds per lap over the first four laps.

A week later he went to Barcelona and ran a fantastic time of 7 minutes, 45.46 seconds in a 3,000 metres track meet, the tenth fastest and the quickest since 2007 over this distance by an Irishman.

“I wonder, with Sean in such terrific form, how he would have fared in the European cross-country championships, which were to have been held in Abbotstown on December 13, considering he finished 18th last year in Lisbon,” says Niall O’Sullivan.