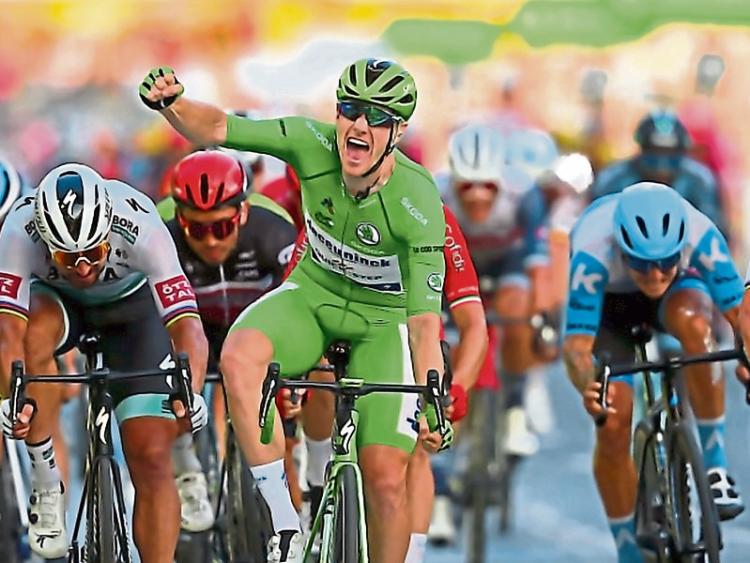 Jack Joy, a journalism student in Dublin City University, makes the case for Carrick-on-Suir cyclist Sam Bennett to be crowned RTE’s sports person of the year.

As Christmas approaches, so too does RTE’s annual sportsperson of the year award.

Ireland’s national broadcaster has awarded the athlete from the island deemed to have achieved the most each year since 1985. Selected by a panel of journalists, no cyclist has been awarded the prize in decades.

Road riders dominated the award in its infancy. Sean Kelly won in 1986, Stephen Roche in 1987. Their successes abroad placed them amongst Ireland’s first sporting icons.

‘At a time of mass emigration, they were Ireland’s most beloved ambassadors on the continent. In an often grey decade back home, they provided colour,’ journalist Barry Ryan wrote in his 2017 book The Ascent.

The malaise of doping and the rise of other sports has seen cycling decline in popularity since but, before the Irish football team captured the public imagination and rugby became the ‘people’s game’, it was Ireland’s cyclists who represented our young nation on the international stage.

And they have been doing so since, though with far less acclaim. Sam Bennett’s career is testament to that.

In the last three years Bennett has won multiple stages at all three grand tours and countless other races around the globe. The Carrick-On-Suir man is among the world’s fastest riders, yet has failed to make RTE’s sports person of the year ten-person shortlist on any occasion.

“I’m competitive at the highest level and have been for a number of years. Riders from other countries have been doing less in the sport and getting more recognition,” Bennett told the Press Association following his successful Tour de France in August.

This year the 30-year-old won at big events in Australia, Belgium and Spain, all as he donned the Irish champion’s shamrock-emblazoned jersey. But it was his performance at the Tour that really grabbed attention.

Bennett won twice at the 107th edition of the world’s biggest race, including a spectacular final stage victory on the Champs Élysées.

He became the first Irishman since Kelly to win the prestigious best sprinter’s green jersey, clawing it from the grasp of the great Peter Sagan, who had won the jersey at seven out of eight previous editions.  He could not be ignored and increased coverage by the Irish media has duly followed.

This trend must continue. Bennett has been Ireland’s best sportsperson in 2020. He deserves to be crowned RTE’s sports person of the year later this month.

In a year when the national football team recorded not a single win, the rugby team floundered under new management and Ireland’s Olympians were forced to wait, it was Bennett’s performances that put Irish sport on the map.

His emotional post-race interviews inspired, a far-cry from the robotic nature of the modern GAA player instructed to ‘say nothing.’

“You know you dream of it, but you never think it’ll happen,” Bennett told cameras, tears flowing, in disbelief after his first Tour stage win.

Only Katie Taylor could lay a legitimate claim in opposition to Bennett in 2020, and the undisputed world lightweight champion may be the appropriate choice in this year of the 20x20 initiative.

Taylor, though, has won the award previously, she is already the face of Irish sporting success and women’s boxing. Coverage is not a concern; she is already able to inspire.

One may argue against Bennett, an athlete from a sport so shrouded in past doping scandals, receiving plaudits from the state broadcaster. However, there were no issues when Conor McGregor was honoured in 2016.

Like Bennett, McGregor has never been found guilty of cheating, but comes from a sport with widespread use of performance-enhancing drugs. A year before McGregor’s bestowal, celebrity MMA commentator, Joe Rogan, spoke of “a steroid epidemic” within the sport on his widely circulated podcast.

It could also be argued that cycling is a minority sport, and that athletes from larger sports would make worthier winners.

This did not stop RTE awarding Shane Lowry last year. Though his victory at the Open was a fine feat, golf also occupies a smaller proportion of Irish sports enthusiasts. In 2019, Sport Ireland found 4% of Irish adults participated in cycling, Ireland’s fifth most popular sport, while golf placed eighth on 2%.

It is not that RTE’s award provides validation of athletic ability. Followers of cycling can appreciate Bennett’s talent, not to mention himself.

However, the glitzy TV ceremony that is RTE’s sports awards, broadcast live to the nation’s Christmas audience, would provide public recognition of Bennett’s contributions to Irish sport.

In Sam Bennett, Ireland has an athlete at the top of his profession, and long overdue celebration.