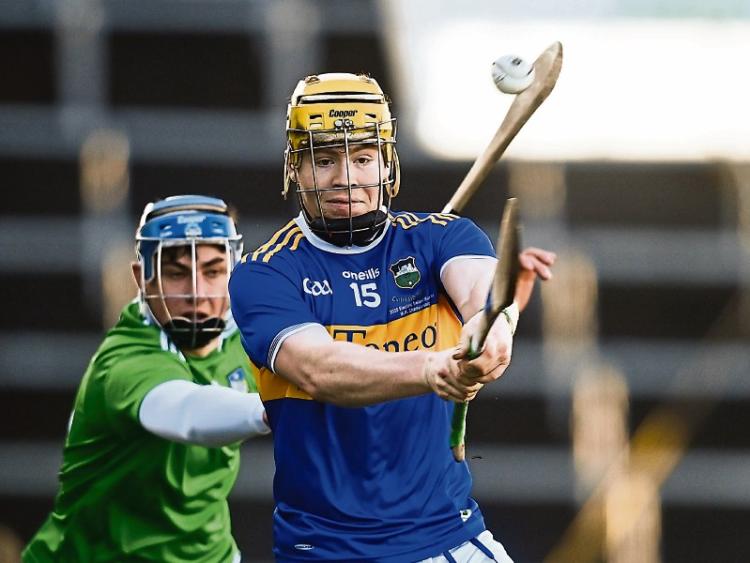 Tipperary's David Fogarty gets to the ball ahead of Limerick's Vince Harrington in the Munster minor hurling championship final. Picture: David Fitzgerald/Sportsfile

It was a case of minor to major – a minor quest producing a major disappointment, as Tipperary’s U17s fell agonisingly short at the end of extra-time in a thrilling Munster final. A brave but luckless effort suffered the cruellest of fates, as Limerick did enough in additional time to edge home in a year that continues to glow for that county.

Tipperary lost the venue toss for this game and that spin of the coin was a harbinger of the fates to follow. It was a hapless day for these teenagers who did so much that was admirable but were dealt the harshest of breaks in what will be remembered as a great minor tussle.

There are days when things fall your way and other times you just couldn’t buy a bounce of the ball. Nearing half-time Tipperary lost goalie, Jason O’Dwyer, after what appeared to be an accidental collision with his full back, Robert Doyle. Shortly afterwards the number three was also forced out as a result of that incident.

That double loss had to be unsettling but more would follow as the drama unfolded. Full forward, Tony Cahill, was also hampered by injury before being replaced in extra-time by Stephen Ferncombe and then reintroduced again very late in the action.

The injury plague continued when impressive midfielder, Darragh Stakelum, had to retire and then it was the turn of standout corner back, Danny Slattery, to also succumb to a knock.

It total, that’s a third of the starting fifteen joining the casualty list at some stage and no matter how strong the panel is the cumulative effect of those losses adds up to a major handicap, especially in such a knife-edge game as this.

But injuries weren’t the only strokes of misfortune to strike the team. Deep into stoppage time at the end of the initial hour and with the sides level, Stephen Ferncombe won possession over on the far sideline, got past his opponent and struck what was an amazing point from that position. However, the linesman flagged that the ball was out before he shot.

There’s no way of judging that call from where it happened but I must admit to being short on conviction – and high on scepticism - since the same official was operating at the stand side in the opening half, where he made a few very dodgy decisions.

It would, if allowed, have been a sensational winner by Ferncombe and on these slim margins this game spun.

Incidentally, at the risk of repetition, could I again suggest a much-needed rule change regarding line balls. In hurling especially, given the size of the sliotar, it is almost impossible at times in live action to decide if a ball, concealed in the fist of a player, has crossed the line or not.

The rugby solution is so workable. If any part of the player in possession touches the whitewash then the ball is out of play. It’s so much more sensible and easier on the linesman.

In the recent All-Ireland final Aaron Gillane scored a truly memorable point from the Cusack Stand sideline. Watch it again. He clearly takes a few steps the wrong side of the line but the flag stayed down, presumably on the linesman’s judgement that the ball hadn’t actually crossed the line.

But that judgement, I’d contend, is more guesswork than anything else. Let’s make it simple and easily enforceable - though I seem to be very much a lone voice in the wilderness on this one.

Anyway, Stephen Ferncombe came within the whim of a linesman to being the day’s hero.

There was more misfortune for Tipperary early in the second half of additional time when Sean Kenneally came tantalisingly close to a goal. His shot flew across the face of the goal line and ricocheted back off the base of the post before eventually being put out for a 65. There are days when it’s simply not going to happen for you.

All of that isn’t in any way designed to detract from Limerick’s achievement. They came into this game as favourites following their big win over Cork and while they rode their luck here and there, they showed great composure to see out the contest as the stronger side.

They had the edge too in a few key facets. They scored two goals (goals win matches as the all-knowing ones say) and could easily have doubled that tally, whereas Tipperary failed to find the net over the eighty-plus minutes.

I thought the Limerick defence was very strong and gave Tipperary few openings, so they were mostly left to try and point their way to a win.

Then there was the free-taking of centre forward, Liam Lynch, a factor I thought wasn’t given due recognition by the commentary team. His nerveless display on the frees was Gillane-esque and so crucial in such a tight contest.

Overall, the winners were physically strong and well able to work the Limerick system of running combination. Patrick O’Donovan (a nephew of Conor, Tipp’s ex-full back) looked a real handful in attack, as did Shane O’Brien.

Then there was team captain, Adam English, a player I’ve referenced before with strong roots in both counties. His dad is a former Abbey and Arravale Rovers player.

On his maternal side Adam has lineage to Limerick’s captain of 1973, Eamon Grimes, and on the paternal side there’s good old Knockavilla pedigree – always something to be recommended!

We’ll surely be seeing a lot more of Adam in the Limerick jersey in future years.

On the Tipperary front Paul Collins and his management team were under some pressure this year after a very poor showing by the minors in 2019.

In fairness to them this was a vastly improved effort, with lots of fine individual displays. Sadly, however, it will be recorded as another year of failure at minor, though on the more positive side there’s surely potential for lots of these lads to drive on to better days in the Tipp colours. 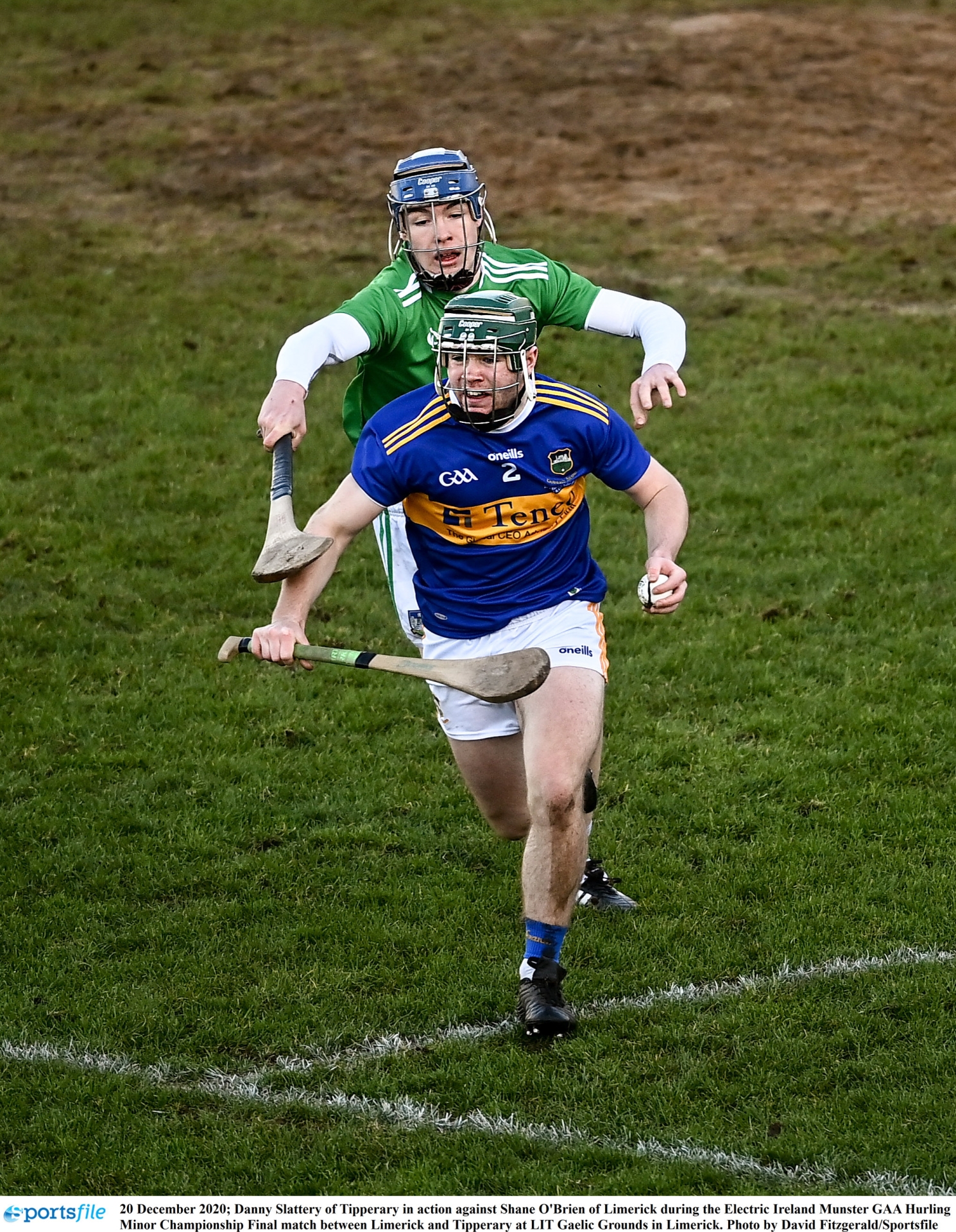 Above: Danny Slattery of Tipperary breaks away from Limerick’s Shane O’Brien during the Munster minor hurling championship final Picture:David Fitzgerald/Sportsfile

In other news I note with interest an Irish Examiner report that the playing rules committee in Croke Park is proposing a sin bin for cynical, goal-preventing fouls in both hurling and football. In football the black card would remain while in hurling a yellow card sin bin would apply.

Why the colour differentiation I don’t know. Perhaps it’s to allay the sensitivities of hurling folk who want no cross-contamination with football.

After the championship we’ve just witnessed I think it’s unavoidable that some penalty for cynical play be introduced in hurling. We’ve had a rash of cynical fouls in hurling this season, where clearly the penalty doesn’t match the offence.

It’s become an article of faith among defenders that once an opening appears for the forward you do whatever is necessary to snuff out the chance.

Indeed, it’s pretty widely accepted now that teams are coached in the darker arts to deny goal-scoring opportunities. This is happening all the way down through underage ranks and it’s becoming a blight on the sport.

Whether the sin bin or some other sanction is the way to tackle the issue is a debatable point. Perhaps an automatic penalty shot for any such offence near goal would be more hurtful than 10 minutes in the sin bin.

An issue that arises with any new rule such as this is how you define a cynical foul. The Examiner report suggests it would involve pulling down a player, tripping with hands, arms, leg, foot or hurley or careless use of the hurley.

But what if you just grab a player and hold him up? Unless the rule is framed carefully defenders will find ways around it.

Another proposal would seek to outlaw any distraction of players about to take frees, puckouts etc. such as the waving of the hurley.

A concussion substitute, similar to a blood sub, is on the list also. The advantage rule is to be restricted to aggressive fouls only. I don’t really see the logic of that one.

In all of this you think of the issues that remain untackled. For example, the throwing of the ball in hurling is now more or less standard practice, with referees either unwilling or unable to enforce the rule. In the speed of the game, I think the rule is unenforceable anyway so something new is needed.

Conor O’Donovan, mentioned above, has been a leading advocate of changing the rule so that the ball has to be released by one hand and struck by the other. That seems cumbersome and scarcely doable in most match situations where speed of execution is essential. For that reason, I have dismissed the suggestion in the past.

But, on further reflection, maybe that’s the very point of his proposal. After all, if the new handpass is so awkward and difficult to juggle with the switch of hands then maybe players will be forced to find some other solution such as the stick pass. Perhaps Conor O’Donovan has a workable solution after all.

Finally, the transfer request from players who seek to move from Kickhams to Cashel KC is back in the news, with social media reports that the King Cormacs have voted in favour of processing the applications. If so, then one assumes the Kickhams’ signature is the next requirement.

I had hoped that over the weeks some resolution to this quarrel would be worked on but, if anything, positions appear to have become even more entrenched.

Club eligibility has been much the same over the decades. You play with your native parish or first club or, alternatively, your parish of residence. Unlike other sports there isn’t free movement, so it will be interesting to see how this pans out.

If past evidence is anything to go by there could be many boardroom twists and turns yet to play out in this sad episode.

Meanwhile, a Happy Christmas to all in these testing times.

May the New Year mark a brighter dawn.