Liam Sheedy must re-invigorate his team for the 2021 campaign, says Westside

To begin this week, it seems particularly appropriate to wish everyone a happy and safe 2021. Never before have we been so in need of some cheer after the annus horribilis that was 2020. Here’s hoping that its successor will eventually earn the tag annus mirabilis, though for the moment we’re still grappling with the horrible aspect.

Janus, the old Roman god who gives his name to the month of January, is usually depicted with two faces, looking to the past and the future. Appropriately then this week we cast a cold eye back to a few recent happenings before switching the focus to what may lie ahead.

Since my last column, pre-Christmas, the county U20 hurlers went the way of the minors, failing narrowly in a Munster final. A late surge, peaked by Andrew Ormond’s goal, ensured a tight finish but, in truth, we were second best on the day and there’s an end to it.

It’s a result that completed our winter of discontent, with no late consolation to soften the year’s harsh tone. 2020 won’t be recalled with any fondness – after the peaks of 2019 the fall-off was sharp indeed.

We had reasonable hopes for our U20s in advance with a decent carry-over from the 2019 winners. Yet their form throughout the series was too patchy. It took a second-half revival to dismiss an un-rated Clare team and then a superb Max Hackett goal to get us out of jail against Waterford.

When your performances are as spotty as that you eventually come up short and the trip to Cork proved their undoing.

Of regrets there were many, of course. Early in each half our best forward, Andrew Ormond, was denied goals that could potentially have been match-turners. From our Tipperary perspective they go down as missed opportunities, though Cork will rightly credit goalie, Eoin Davis, with quality saves.

I’d give the major credit to the goalie for the first one, though on the second chance the forward probably should have done better by either moving closer to the ‘keeper or placing the shot away from him.

The game’s crucial goal eventually fell to Cork at a critical point. Aaron Browne made an excellent save on the initial effort but was helpless when substitute, Jack Cahalane, pounced on the rebound. Eventually Cork went six-up before Tipperary’s late rally fell two short.

When you lose so narrowly there are always regrets, a sense that a modest change in fortune would have made the major difference. Yet, on balance, we have to concede that Cork just about deserved this one.

It wasn’t a scintillating display from the Rebels but it was more compact and efficient than Tipperary’s, which was high on errors. 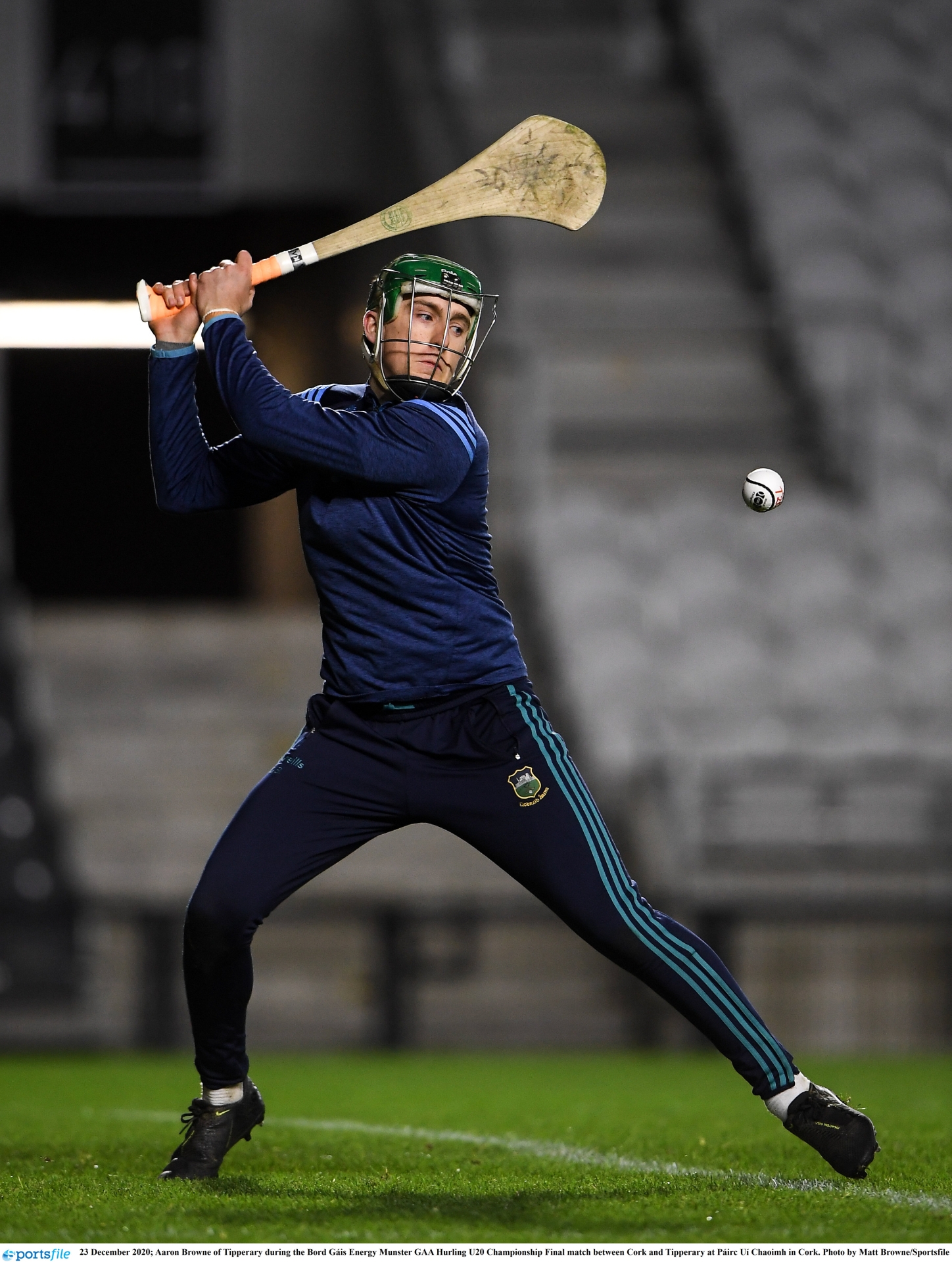 Above: Goalkeeper Aaron Browne in action for Tipperary in the Munster U20 hurling championship final against Cork Picture: Matt Browne/Sportsfile

Interestingly, Eoghan Connolly has earned senior recognition on the back of this campaign, with Liam Sheedy calling him aboard. Actually, he’s been earmarked for a few years now as one with the potential to step up and his form against Cork before Christmas underscored that perception. He seems to have all the ingredients, from physicality to hurling skill to match temperament.

Stepping from underage to senior is the ultimate reach for any player. Many are called but few are chosen. Most underage players, even All-Ireland winning ones, never make the cut. For most it’s a bridge too far. And therein lies the major challenge for Liam Sheedy as he plans ahead for 2021.

The manager’s natural inclination is to put his faith in the tried and trusted, as he did in 2019 to great effect. Yet now he has to shuffle the pack somewhat because the formula of the past won’t deliver in the future. His team needs re-invigorating and that requires some new faces and a new approach.

But has he got the new faces ready to take their place on the elite stage that is senior inter-county? There’s the question, and it’s one I can’t answer with any great conviction. Even last year, after the initial defeat to Limerick, the manager had to revert back to known strengths.

It’s a bit of a catch 22 for the boss because on the one hand he needs to win games but on the other he needs to blood upcoming players; sometimes those twin aims are incompatible.

It all places a huge emphasis on the forthcoming league campaign, because once another truncated championship kicks in there’s no room for experimentation. Last year’s dismal league series sowed the seeds for championship failure.

This time the league has to set the trend in what I think will be Liam Sheedy’s most challenging season as manager – and, on past evidence, probably his last in charge.

Incidentally social (un-social?) media - or at least one well-watched contributor thereon - spread a story last week that Andrew Ormond was promoted to the senior panel alongside Eoghan Connolly. Not so, and I can only imagine the discomfort of the J.K. Brackens man as this fiction was let loose.

The same twitterati announced to the world that Tipperary were back in training, even though January 15 is the official re-start date. That’s one, I’m sure, Liam Sheedy didn’t appreciate, as Croke Park keeps an eagle eye on these matters in the present time of national emergency.

Once more the story was untrue but I suppose when you’re sitting anonymously on the ditch then veracity isn’t such a priority.

Incidentally I’m aware that speculation as to the identity of the above twitterer has pointed some in my direction as a likely source. Innocent, your honour! I do have a twitter account, which I flick through now and then to see what’s trending or amusing people, but I never contribute. It continues to amaze me how some people appear to live their lives on such forums.

Since my last column the county board held its annual convention, where there were some developments of note. Joe Kennedy’s appointment as the new chairman, in place of the retiring John Devane, was a formality.

The election of vice-chairman, though, was a big-ticket item because this post carries onerous responsibility, especially chairmanship of the County CCC. This is the committee that oversees the running of the club championships.

In a year of elections, John Donovan became assistant treasurer and the board also chose a new PRO. From a field of four, Loughmore’s Jonathan Cullen polled best to replace Joe Bracken.

This PRO position has come a long way since it was first initiated as a type of figurehead for the board back in the 1970s. Now it’s a busy, working assignment with previous holders setting very high standards in the general area of disseminating information.

On the motion front, the board introduced a new U19 grade. This will go down as one of the craziest motions ever passed by a county convention. Once the grade parameters changed nationally to U17 and U20 - and whether you agreed with the changes or not (I have reservations) - the sensible approach was to adjust your club grades accordingly. Instead, we’ve now gone and inserted yet another layer of competition. How on earth did this get through?

Finally, and by way of update, there’s some news on the proposed transfer of players from Kickhams to Cashel K.C. It will be remembered that the King Cormacs voted before Christmas in favour of processing the transfer applications. These then went to the county board as part of the normal procedure.

Club eligibility and the parish rule in the GAA usually refer to one’s native parish or one’s place of residence as qualifying criteria. It had been assumed, therefore, that these transfer requests would be based on residence in Cashel, since the players involved have close family ties in the town.

However, it now emerges that the players have used their home addresses in Knockavilla on the transfer forms. This has certainly raised a few eyebrows. How can players native to and resident in one parish transfer, under GAA rules, to another? In normal circumstances they can’t. Indeed, the conditions surrounding residency have been tightened in recent years and this may well have come into play here.

The next step in the process will be for the transfer forms to go to Kickhams for consideration. If the club signs the forms and effectively gives its blessing then obviously that helps the players’ transfer requests, though without guaranteeing anything.

If the club doesn’t approve, however, and wants the players to remain on their books then the situation becomes even more problematic.

Either way the forms then go to the county CCC and here’s where Jimmy Minogue, the newly- appointed chairman, gets his baptism of fire with a right tricky issue to adjudicate. I suspect this case has a long distance to run yet.

I mention all this simply by way of an update on a case of major GAA interest, since it involves county players. As one who knows and respects a lot of the people on both sides of the divide, I remain impartial and simply saddened that this has ever happened.