Most Clonmel people are aware of Hillview Sports Club, located on the Mountain Road, Clonmel.

But not everyone is aware of the outstanding sporting and social activities the club has to offer to the citizens of the town and surrounding area.

Hillview caters for tennis, pitch and putt, badminton and table tennis, while facilities are provided to schools, social and charitable organisations.

Hillview has been proudly associated with the town of Clonmel for over 80 years and the facilities in the club have been upgraded with each generation.

The club has always been a great recreational space for juniors over the summer months and it’s hoped they remember the good times they had in Hillview.

Grass tennis courts were provided in 1939 and a nine-hole pitch and putt course was added in 1955.

In 1973, the original wooden pavilion was replaced with a new club house, badminton hall and bar.

The pitch and putt course was further extended to 18 holes in 1978 and a second badminton hall was added in the early 1980s.

In 1992 a major extension to the clubhouse was carried out, and by 2000 all six tennis courts were converted to all- weather, followed by a lighting upgrade in 2017.

A major refurbishment of the two badminton halls was also completed in 2019. 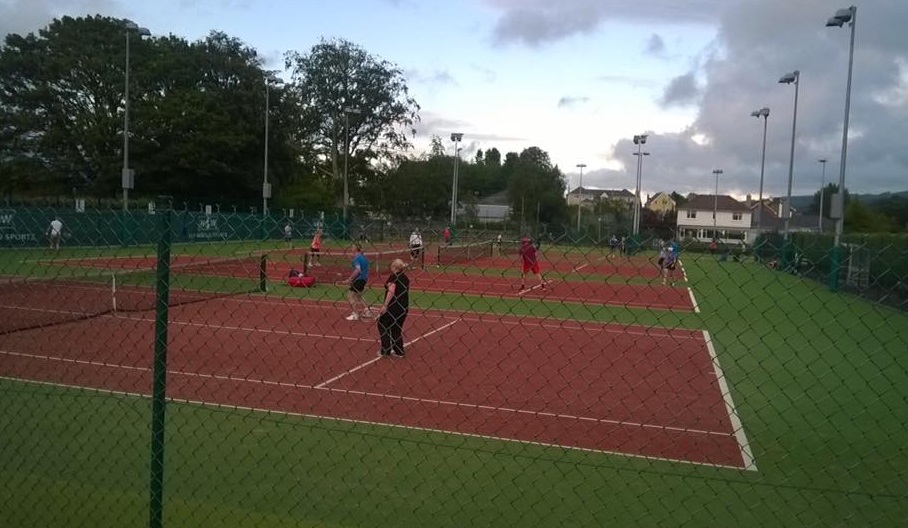 Above: By the year 2000 all six tennis courts at Hillview Sports Club in Clonmel were converted to all-weather surfaces

Hillview was initially founded in 1939, but now faces what is probably its toughest challenge in 2021 to sustain the club for present and future generations.

At the end of 2019, the club was in a healthy financial position.

However, as a result of the Covid-19 lockdown restrictions, the club’s income suffered a severe drop of approximately €50,000.

This was as a result of virtually no income from the bingo, bar, hall rental or functions, while at the same time overheads such as wages, insurance, maintenance, building repairs and utilities still had to be paid.

It is important to note that the annual membership fees and day fees cover less than 50% of the normal operating costs, and as such Hillview is extremely dependent on its external fundraising to generate most of the remaining 50% required to maintain the running of the club.

With that in mind, the management of the club is appealing to the goodwill of past and present members and the general population of Clonmel and surrounding areas to consider supporting the club’s Go Fund Me appeal.

It is hoped to raise €12,000 to help towards Hillview’s ongoing costs and to ensure the club not only continues to survive but to hopefully be ready, when the time comes, to serve the community in sport again.

The club would be most grateful for and appreciative of a donation of any size whatsoever.

You can donate by logging onto its Facebook page and looking for Hillview Sportsclub Go Fund Me Appeal.

Community clubs such as Hillview are not able to survive on memberships.

All sports activities organised by Hillview are run by volunteers, who give generously of their time.

This also includes the many volunteers who help run bingo, the lotto and assist in the bar.

All in all about 80 volunteers help in running the various aspects of the club including management, sports and fundraising committees.

Hillview is used extensively by schools, voluntary and community groups for all types of activities including fashion shows, table quizzes, Clonmel OAP and wheelchair association parties, as well as major charity events including the Sean Kelly and Emergency Services annual cycles.

The club very much hopes, with your help, to be in a position to continue supporting these and many other community events.