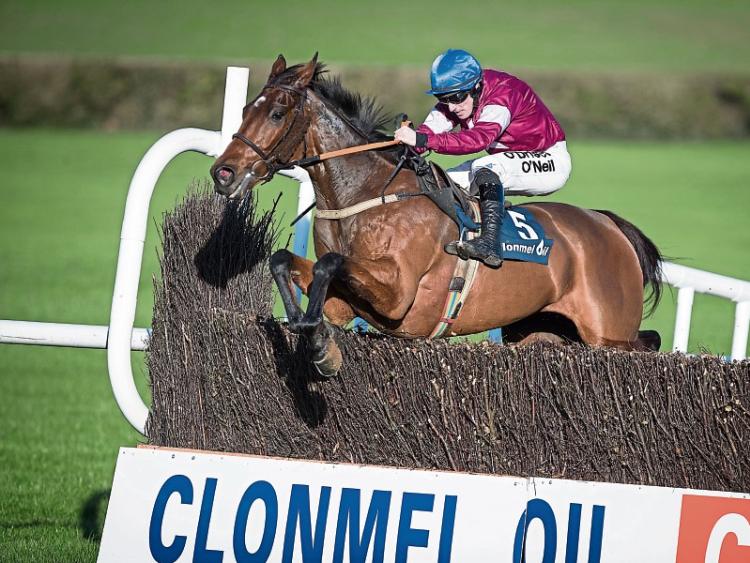 Racing is from Clonmel this afternoon

Racing is from Powerstown in Clonmel this afternoon

Horse racing is from Powerstown in Clonmel today  and tips have been provided by MyRacing.

This looks fairly open for a mares' maiden hurdle and plenty of these should be winning races in time. A chance is taken on BERINS BENEFIT who was probably going to win at Tramore last time if she had jumped the last better. Chenery seems to be going the right way and \

Manitopark should be thereabouts again if she sees out this longer trip.

Envious Editor is likely to be well supported again and he just about sets the standard here but he might be vulnerable to an improver. CAVALLINO fits the bill having shaped like he would benefit from the experience on his debut over hurdles and he's less exposed than his main rivals here.

This looks like a good opportunity for RAGNAR LODBROK to add to his tally after finding 2m4f in a Grade 1 unsuitable last time out. He's proven at this sort of level having hit the frame in Listed/Grade 3 company and he may be able to resume progress back up in trip. Minella Escape is likely to be another suited by 3m.

An open event but COOLE ARCADE has been shaping like a win is around the corner in recent starts and he's only been nudged up 2lb for his most recent effort. De Bennette could benefit from the fitting of headgear while Vitudurum looks on a workable mark if he can reproduce his best form.

Not much depth here and question marks about more than one of them. Top-weight Damut is well-treated on his chase form while the drop in trip could well suit Westy Fox, while cases can be made for the likes of Secret Cargo and Royal Rhythm, but perhaps a case too can be made for LITTLE TOKEN, a decent fourth at Tramore last time and has been dropped another 2lb here.

Brawler sets a standard here on his run at Fairyhouse last month, while the good handicap form of Lean Araig and to a lesser extent The White Volcano give them a chance here. The debut performance of Whereyounow here in December bring him into it too. A chance is taken on his chasing debut with FORRARD AWAY, impressive from the front in a handicap hurdle at Gowran last month with the stamp of a chaser about him.

A few here with chances, including the consistent top-weight An Marcach and recent Down Royal runner-up Cappacon, while a return to form for Presenting Point and Carnet De Stage would put them in the mix. While GOULANE JESSIE does not win very often, her close second to Kristian Goingwel in a Punchestown handicap chase last month reads very well in the context of this race and she could take some beating.