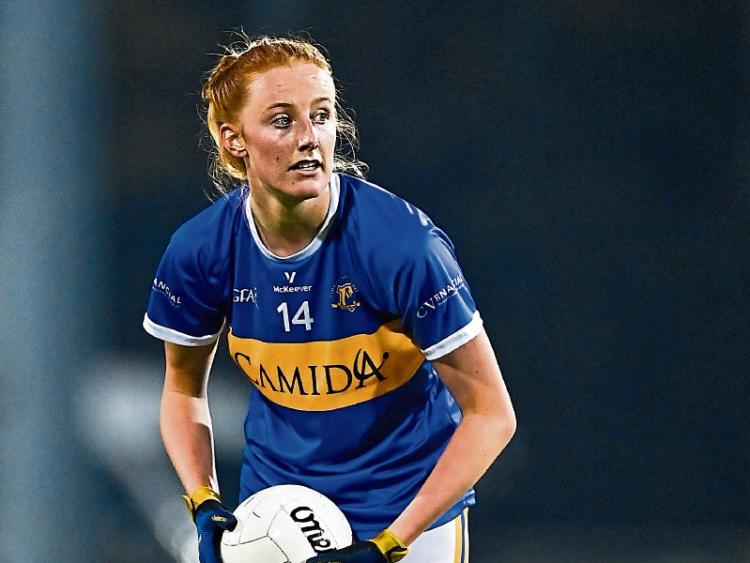 Aishling Moloney has a busy year ahead on two fronts, as she prepares to line out with the Tipperary senior Ladies football and camogie teams in 2021

The first Covid-19 lockdown was the silver lining in the cloud that had hovered over the career of Tipperary Ladies football star Aishling Moloney.

While sportspeople throughout the country were left kicking their heels in frustration and disappointment when all activities ground to a halt almost a year ago, the break came at just the right time for the Cahir player.

She admits that she had been on the verge of burnout and was rapidly losing interest in sport last spring, a downward spiral in her career that started shortly after she helped Tipperary win the All-Ireland intermediate title for the second time in two years in September 2019.

“It’s just something that happens to every sportsperson,” she says.

“Playing sport was becoming almost like going to work and I needed time to recharge the batteries.”

Her arrival at that stage of near-exhaustion shouldn’t have come as a complete surprise. Her talents are such that she has been in demand for her school, college, club and county from an early age, which meant that she was playing Gaelic football and camogie almost all year round.

One of the best forwards in the game, the 23 year-old also won an intermediate All-Ireland with Tipperary in 2017, as well as captaining Dublin City University to an O’Connor Cup in 2018, and picking up the intermediate Player’s Player of the Year football award in 2019.

Aishling says that lockdown actually revived her and she returned to the fold refreshed when lining out for Tipperary in last year’s senior football championship, while also making her senior inter-county camogie debut.

Her most recent appearance in a blue and gold jersey came early last November, when Tipperary bowed out of the All-Ireland senior ladies football championship having suffered a one-point defeat by Monaghan.

That was also the game in which she picked up a knee injury that has troubled her ever since, although the good news for the player and Tipperary is that she is almost recovered.

“I was getting up off the ground and I heard a pop. I thought it was the cruciate but it was only a medial ligament injury, thank God.

“I’m coming near the end of it and I’ll be raring to go again once the restrictions are lifted,” she says.

When she and her teammates in the county football team eventually return to training there will be a new face at the helm, following Declan Carr’s appointment as manager last month.

“It’s going to be very exciting,” she says.

“Shane Ronayne was manager for a long time and he’s an excellent manager. He did a lot for Tipperary football and it’s unfortunate that he left.

Now that she has fallen back in love with sport, Aishling has again committed to lining out with the county senior camogie team this season.

“I’ll be kept busy but it will be a good busy,” she says.

“I didn’t get a proper run at the camogie last year. I had injuries and then the crazy decision to give me a red card in the second half of my first match (the win over Clare) set me back.

“Dad (Martin Moloney) is massively into the hurling and I said I would give it a go for him as much as anything.

“I have an opportunity to play again and I’m honoured and excited to be involved with manager Bill Mullaney and the team.”

While Aishling and her fellow footballers and camogie players are chomping at the bit and waiting for the green light to return to collective training, two Tipperary footballers are making a name for themselves on the other side of the world playing professionally in the Australian Rules Women’s League.

Aishling says that she has had offers to follow the same path but so far it has been a question of timing - she is in her final year of studying to be a PE teacher in Dublin City University, and completing her degree is an obvious priority.

But she hasn’t ruled out playing in Australia at some stage.

She says it’s “brilliant to see Tipperary players doing so well in Australia.”

During the recent Tipperary Talks Sport webinar organised by the Tipperary Sports Partnership, Aishling said that a possible merger of the camogie association and Ladies Gaelic Football Association (LGFA) “would be brilliant, if they did come together.

“But it’s not as simple as saying they should, there’s a lot of ins and outs to it.”

She also described as “madness” last year’s fixtures clash in Cahir, which saw the club’s junior A camogie team and the senior football team down to play matches on consecutive days, an impasse that was only resolved when the camogie team withdrew from the county final.

In the course of that wide-ranging online discussion, which celebrated the very best of women in Irish sport, she paid tribute to the influence of her parents Gertie and Martin, praising them as role models and saying how proud she was of them.

“They encouraged me to keep at it and keep going and they always backed me all the way.

“I mainly play for them really, to see the enjoyment they get. Mam wears the sunglasses after games sometimes because she cries (tears of pride).

“We’ve had some nice times together after games.”

Aishling also spoke of the importance of young girls maintaining their participation in sport during school and college.

“In the world that we’re in now your mental and physical health is really important.

“Even if it’s not in sport, it’s getting out in the fresh air for an hour before you get down to the books. I think it’s really important for the kids to just stick at it.”

She also said it was important to encourage “non-sporty” girls to keep their interest going in other activities, “be it dancing, anything,” during their school years.

Finally, her advice for young athletes and sportspeople is “it’s okay to be you. Be confident in yourself and don’t let anyone else influence you.”