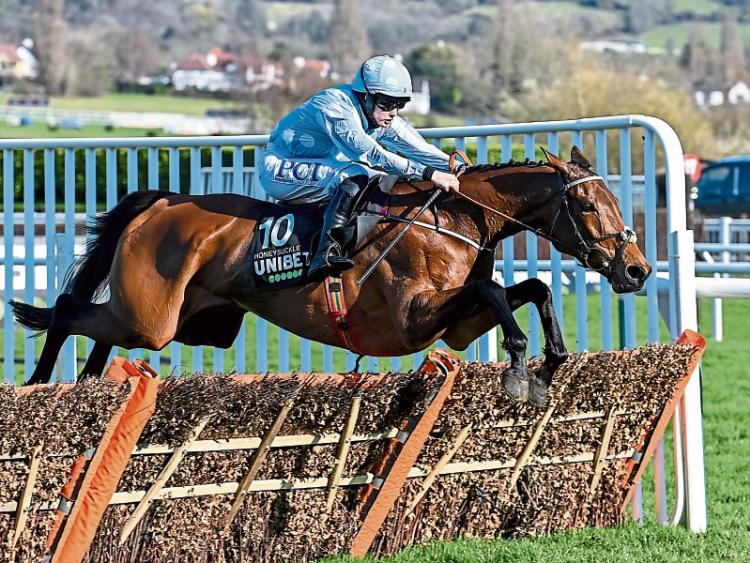 Jockey Rachael Blackmore enjoyed the biggest win of her career when she rode Honeysuckle to an emphatic and historic victory in the Unibet Champion Hurdle on the first day of the Cheltenham Festival  this afternoon.

Honeysuckle justified her 11/10 favourites tag when the mare preserved her proud, unbeaten record by romping to her eleventh win from her eleventh race, while the Killenaule woman became the first female jockey to win the Champion Hurdle.

“Absolutely incredible,” was Rachael’s reaction when interviewed moments after the race.

“It’s unbelieveable for everyone in the yard, they all work so hard.

“Henry (de Bromhead, the horse’s trainer) just produces her every day and I just get to steer her around.

“She is so straightforward to ride. When you know you have an engine under you it’s very easy to do things in a race.

“It’s a privilege to be here.”

ITV racing commentator and former champion jockey AP McCoy said that Honeysuckle had been “brilliantly ridden” by Rachael Blackmore, adding that the Killenaule woman “walks the walk more than she talks the talk.”

The Champion Hurdle success was Rachael’s 13th Grade One victory, all of which have come for trainer Henry de Bromhead, who trains at Knockeen, near Tramore, in Co Waterford.

De Bromhead described Honeysuckle’s win as “amazing, the stuff you dream of.”

Blackmore was also in the frame in one of the earlier races, finishing third on 10/1 shot Captain Guinness, also trained by Henry de Bromhead, in the Arkle Challenge Trophy Novices Chase.

31-year-old Rachael rode her first winner, Stowaway Pearl, as an amateur jockey for trainer John Shark Hanlon at Thurles on February 10 2011, a win that she has stated gave her feelings of “shock, disbelief and joy.”

She had 11 point-to-point winners and seven winners as an amateur rider before turning professional in March 2015.

The daughter of Eimir and Charles Blackmore, she gained her first success in the paid ranks when Most Honourable, trained by Shark Hanlon, was a winner in Clonmel on September 3 of the same year.

She ended the 2018-19 season with 90 winners, easily securing the runner-up spot in the jockeys’ championship behind Paul Townend.

She finished third to the Corkman in the 2019/2020 season, which was cut short by the Covid-19 pandemic.

A Plus Tard gave her the first of (so far) four Cheltenham Festival successes when landing the Close Brothers Novices’ Handicap Chase two years ago.

Henry de Bromhead’s five-year-old went off a 5/1 favourite and won by 16 lengths.

On the final day of the same festival, she gained her first Grade One success when Minella Indo landed the Albert Bartlett Novices’ Hurdle, as she became the first female jockey to ride a Grade One winner over hurdles at the Cheltenham festival.

Rachael won the Grade One Close Brothers Mares’ Hurdle at the festival on Honeysuckle last year before repeating the success in the more prestigious Champion Hurdle this week.

Had crowds been allowed to attend this year’s festival, what a reception both horse and jockey would have received from the Irish contingent who pack the course at Prestbury Park to the rafters every year.

The Killenaule woman will be gunning for a big race double when she rides the Henry de Bromhead-trained A Plus Tard in Friday’s Gold Cup at Cheltenham.