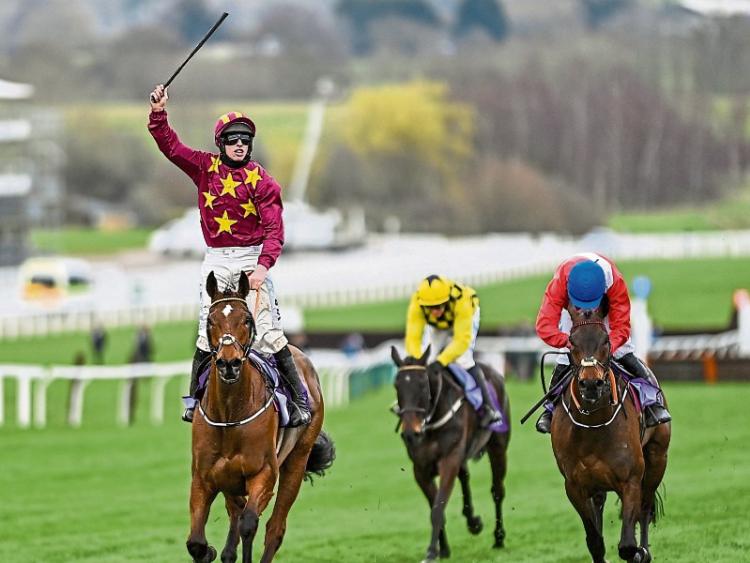 Jockey Jack Kennedy on Minella Indo celebrates as he beats Rachael Blackmore on A Plus Tard, right, and Al Boum Photo, with Paul Townend on board, during the WellChild Cheltenham Gold Cup

Killenaule jockey Rachael Blackmore may have had to settle for second place in today's Cheltenham Gold Cup but Tipperary has a strong connection to Minella Indo, the winner of the festival's most prestigious race.

Ridden by Jack Kennedy and trained by Henry de Bromhead, Minella Indo was previously owned by John Nallen in Clonmel and bears the name of Hotel Minella, the hotel in the town that is owned by John and his sister Elizabeth.

A son of Beat Hollow, the horse was bought by John Nallen as a foal at Tattersalls Ireland for €24,000 and won on his debut run in a point-to-point at Dromahane, before being sold privately into de Bromhead's stable as a five-year-old three years ago.

John Nallen has been quoted as saying that Minella Indo had "a really good presence about him" and was "just the real deal" when he decided to buy the horse.

He beat Rachael Blackmore’s mount A Plus Tard in an exciting finish to the Gold Cup with Al Boum Photo, the winner of the race in the last two years, finishing third.