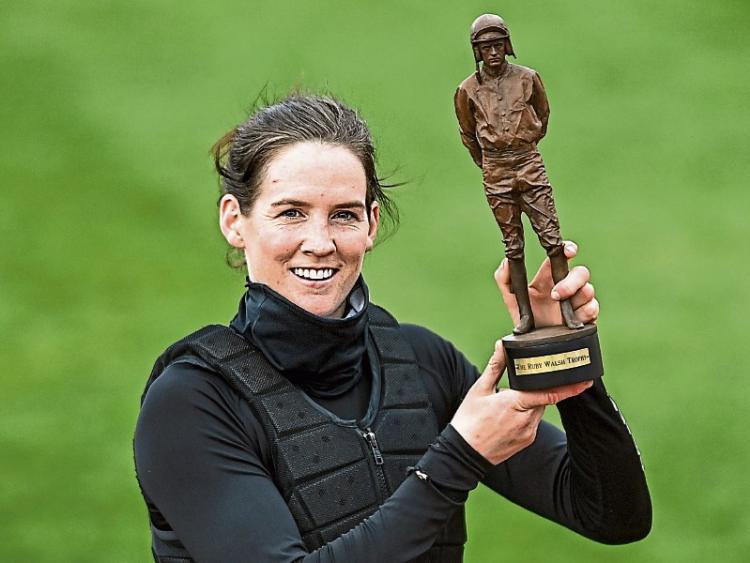 “I couldn’t see how it would be possible for her to earn a living from horse racing,” says Eimir.

“But she is doing something she loves and has a good work ethic.”

Rachael confirmed her status as one of the top National Hunt jockeys in Ireland and Britain last week when her six winners secured the title of leading jockey at the Cheltenham Festival, the first woman to win that accolade, as well becoming the first woman in the festival’s storied history to win the Champion Hurdle, when her mount Honeysuckle preserved her unbeaten record.

It was also a week when her talent and tactical awareness continually received the highest of praise from racing commentators and former champion jockeys AP McCoy and Ruby Walsh.

Her mother says that Rachael wanted to become a vet but would be quite honest to admit that she didn’t get enough points in her Leaving Cert to follow that career path.

She grew up around horses and ponies on the family farm in Killenaule, and while she was always interested in horses and riding out her mother impressed upon her the importance of having a Plan B.

Eimir encouraged Rachael to study at Third Level, and believes the course she completed in equine science at University of Limerick stood to her.

“She was that little bit more mature getting into the racing game,” says Eimir.

“At the time (she became a jockey) you had the wonderful Katie Walsh and the brilliant Nina Carberry, who were also jockeys, and they were a fantastic support to her.”

Eimir says that she and her husband Charles and the family have been “absolutely bowled over” by the deluge of congratulations and support they have received in the past week.

“We just cannot believe the amount of support she’s getting.

“We’re gratified and happy that people are getting such a kick out of it.

“We’re delighted and extremely happy with the fact that she has given people such a lift in these austere, hard times.

“We have had letters from people living on their own who said they were never into horse racing but who are following Rachael.

“It has given Killenaule a great lift as well.

“John O’Dwyer’s butcher’s shop, which has hosted a lot of the visiting media last week, has been hopping.”

Eimir says nobody could have imagined a week the likes of which Rachael had enjoyed.

“We were delighted when Honeysuckle came in. We said she would be fine now, she has had a win and she’s safe.

“But then she won five more races to be crowned the leading jockey at the festival.”

Eimir has also spoken of her fears for her daughter in the sometimes rough and tumble world of National Hunt racing.

“It’s difficult as a mother, you only want them to be safe.

“We’re very lucky that Henry de Bromhead has a reputation as a trainer whose horses rarely fall.

“From my point of view that’s good, it’s music to my ears.

“The horses and jockeys go around the courses at 30 miles per hour.

“Sometimes you’re in the winners enclosure and sometimes you end up at the butt of a fence.

“That’s the reality, it’s not all glory. It’s a hard station.”

A secondary school teacher at Comeragh College in Carrick-on-Suir, Eimir recalls the days when she would drive from Killenaule and drop the children into school in Clonmel on her way to work in Carrick, before picking them up again on the way home.

“I thought it would be better for the children to go to different schools, where their mother wasn’t a staff member.”

“I was a past pupil of Loreto and the girls were eligible to attend the school as a result.”

Eimir lived for a time with her family at Davis Road in Clonmel.

Her father Eoin Lysaght was employed by Guinness' and the family moved to Galway and then Dublin before finally settling in Killenaule, where she eventually married her next door neighbour Charles Blackmore.

Eimir is also keen to pay tribute to the many people who have helped Rachael achieve her abundance of headline-making success in the past week.

“Horse Racing Ireland have been absolutely fantastic in facilitating the jockeys so that they could compete safely at Cheltenham.”

In praising Dr Jennifer Pugh, the senior medical officer of the Irish Horseracing Regulatory Board (IHRB); Jennifer Walsh, also of the IHRB and Barbara White, PR and events manager at Horse Racing Ireland, Eimir says that without their tireless work in the background to make it all happen, Rachael wouldn’t have had the chance to travel to Cheltenham and “have her day in the sun.”

“They are all unsung heroes, as is Dr John Downey in Carrick-on-Suir.”

Eimir says that people have been so good to the family, dropping off gifts and cards for Rachael for when her Covid-19 quarantine has ended and her racing schedule allows her an opportunity to call home.

“My kitchen is full of flowers,” says Eimir.

She and Charles also had a nice surprise last Sunday when the Nallen family from Hotel Minella in Clonmel (the Gold Cup winner Minella Indo was bought and sold as a foal by John Nallen and still bears the hotel’s name) arranged to have “a beautiful” lunch delivered to their home.

“Charles and I were married at Hotel Minella and have been friends with the family for years.

“And the lunch was delicious,” says Eimir.