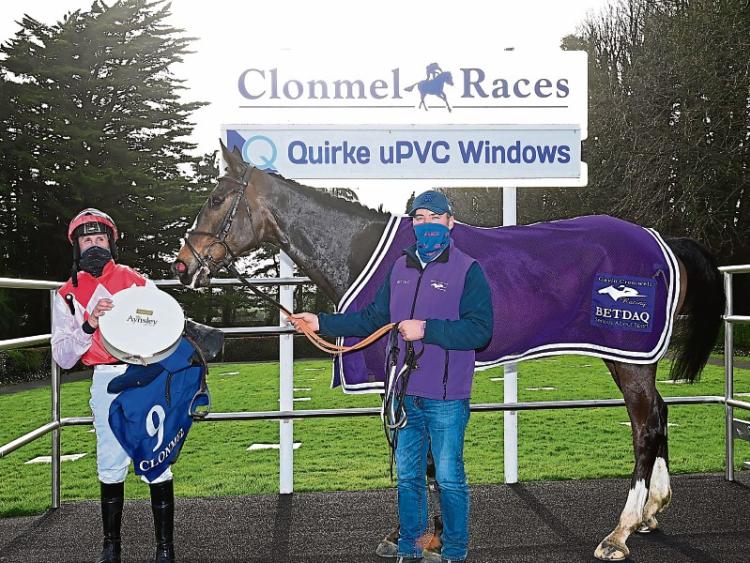 Oscar Thyne was on the podium following the Quirke uPVC Windows Clonmel Beginners’ Steeplechase at Clonmel. The horse is pictured with jockey Conor Maxwell and his groom. Picture: Healy Racing

With the dust having begun to settle on last month’s remarkable run of success for Irish-trained and bred horses, jockeys and trainers at the Cheltenham Festival, Clonmel racecourse decided to focus instead on the lesser lights at last week’s race meeting in Powerstown Park.

Four of the seven races were confined to jockeys who had not ridden more than ten winners this season and the young bloods had the stage to themselves for a change, making the most of the opportunity.

The main sponsor on the card was Eugene Quirke of Quirke uPVC Windows in Clonmel, who gave his backing to the beginners’ chase won by the well-supported 3/1 joint favourite Oscar Thyne, from the Gavin Cromwell stable, who was driven out by Conor Maxwell to win well by two and three quarters of a length from Mount Melleray.

The rider said afterwards “he was good and the drying ground probably helped him more than anything.

“His jumping has let him down on bad ground previously but to be honest, I thought the race fell apart around me. His jumping needs to sharpen up an awful lot but he travelled well through the race and won well in the end.”

Eugene Quirke’s business premises are in Gortnafleur Business Park, just 100 yards from the racecourse and he prides himself that every PVC window and door ordered will be individually made to suit the needs of your home.

He founded the company 35 years ago and employs three people and himself.

As he said, “small is beautiful and I never wanted to be any bigger.”

Eugene has been sponsoring a race in Powerstown Park for the last seven or eight years, commenting “I like to support the local racecourse.

“My wife Margaret and our two children Thomas and Claire always enjoy going to Clonmel to present the trophy and have a meal there with a few friends.

“It’s all part of the deal and hopefully next year will make up for missing out due to Covid-19 for the last two years.”

Goolds Cross-based trainer Sam Curling has another very useful prospect on his hands in the bumper winner Shantreusse, who posted a very likeable performance in the hands of multiple point-to-point champion Derek O’Connor with his three and-a-half length defeat of Donnrua Dream.

The five-year-old races for Fergal O’Neill’s Direct Bloodstock, whose colours were carried to success by Belfast Banter in the County Hurdle at Cheltenham last month.

His rider was impressed and stated “he was second the first day behind Gino who, by all accounts is a very, very good horse and we didn’t disgrace ourselves.

“He has improved a whole lot and appreciated the nice conditions.

“We were beaten by a possible star the first day and he’s a very nice horse with a nice bit of speed and a good future ahead of him.”

Cheltenham-winning trainers Paul Nolan and Willie Mullins were also on the mark with Western Zara, a fortunate winner of the mares maiden hurdle under Richie Deegan; and Punchestown disappointment Cavallino who redeemed himself, with Conor McNamara in the saddle, in the opener.

The next meeting at Powerstown Park will also take place behind closed doors on May 13 but Eugene Cooney, the racecourse’s sales and marketing manager, offered a glimmer of hope for the future.

He said “it’s looking like our popular barbecue meeting in June will also be behind closed doors, but there is growing optimism that we could be open to the public again at the beginning of September, after our summer break.”

One person who will be greatly missed at race meetings in the future is Mary Hearn from Bonmahon in Co Waterford, who sadly passed away on March 28.

She was a great supporter of the racecourse and always had a kind word for everyone.