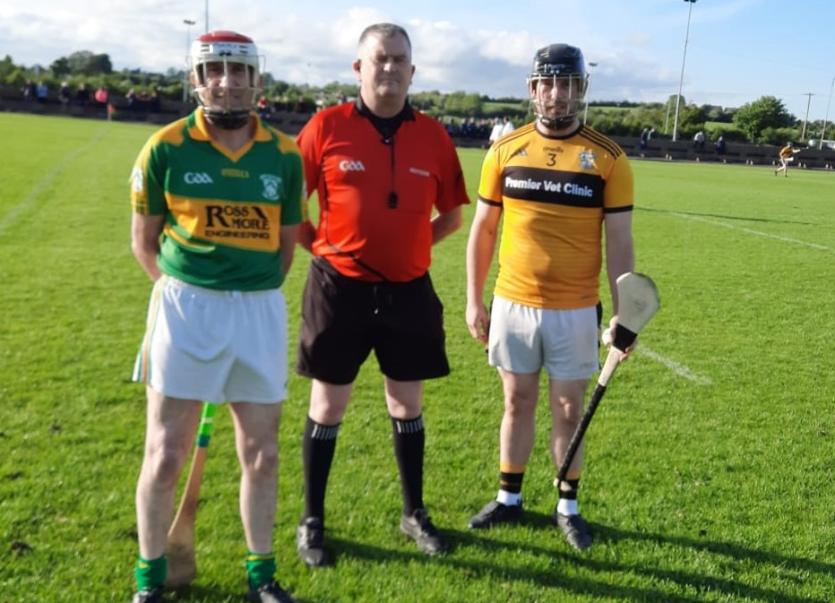 The game was played at Cashel at the weekend

Knockavilla Donaskeigh Kickhams are through to the final of the 2020 Tipperary Co Op West Junior B Hurling Championship following their two point victory over Clonoulty/Rossmore at Leahy Park, Cashel on Wednesday evening last.

Played on a well maintained surface, before an enthusiastic Covid restricted crowd, this game went down to the wire and it took a save by Paddy Ryan, from a Clonoulty free, deep into injury time, that enabled Kickhams to advance. The main difference between the sides in this close contest was the accuracy of Dan Lonergan for Kickhams, from both placed balls and open play. He hit a total of ten points during the hour.

Eddie Daly opened the scoring after three minutes when he put over from out the field. Nicky Kearns equalised three minutes later before a Ben Ryan goal for Kickhams, at the far end, when he latched on to a ball that Clonoulty failed to clear. Jack Ryan added a point for Kickhams while points from Kearns and Kieran Carroll kept Clonoulty in the hunt. Lorcan Carr and Kearns exchanged points, before Dan Lonergan hit two long range points in the twelfth minute. Kickhams went to the water break, four points to the good .

Clonoulty lost Nicky Kearns to injury and was replaced by Nicky Mockler. Kickhams kept up the tempo and points from Eddie Daly and Lonergan had them six points to the good as the game entered the final ten minutes of the half. Padraig Coen came more into the game and forced a point blank save from Paddy Ryan as he hit two points in quick succession. Dan Lonergan scored his sixth point of the evening from a placed ball, before Kevin Maher pulled one back for Clonoulty to leave the half time score, Knockavilla Donaskeigh Kickhams 1.10, Clonoulty Rossmore 0.10.

After the restart Peter Comerford stretched this lead with a point from out near the corner at the near end. A fortuitous goal, direct from a sideline cut, by Padraig Coen brought Clonoulty right back into the game and put the minimum between the sides, but two further converted frees from Dan Lonergan had restored Kickham’s three point advantage by the seventh minute in this end to end contest.

Padraig Coen ran at the Kickham’s defence and was rewarded with a goal from Nicky Mockler, when his low shot to the corner beat Paddy Ryan at the far post. A point from a placed ball from Dan Lonergan ensured that the sides were level at the water break, 2.11 to 1.14.

Scores were hard to come by after the water break, with both defences on top. Eoin Carew and Mockler exchanged points, before Kickhams introduced Dean Thompson and he quickly hit two points inside a minute with seven minutes remaining. Lonergan hit his tenth point of the evening to put three between the sides, but a similar score from Padraig Coen ensured tensions remained high as the clock ran down.

Clonoulty had one last attack and a thirty meter free at the death was saved by Paddy Ryan and cleared to safety. Kickhams advanced to the final where they will meet Cashel King Cormacs.