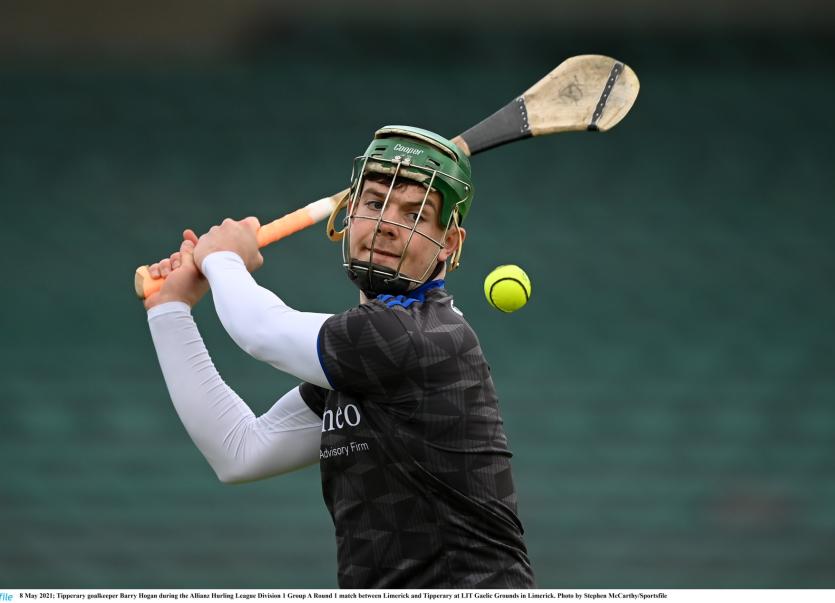 The kid in the press box, Barry Hogan, is now taking centre stage

You'd see see him down on the pitch banging the ball about and doing what all kids do before and after games, and at half-time in the matches.

Those of us practitioners in the Tipperary GAA press corps have an extra special interest in the fortunes of the Premier County's number one for the Munster Final on Sunday.

Barry Hogan of Kiladangan -son of freelance sports journalist Liam Hogan - has been in and out of the pressbox, with hurley and sliothar in hand, since he was knee high to a grasshopper.

And, when he wasn't in the box, you'd see see him down on the pitch banging the ball about and doing what all kids do before and after games, and at half-time in the matches.

So, if practice makes perfect, then in Barry's case the perfect goalkeeper was in the making - if indeed, there exists such a thing. All goalkeepers have their off days, but Barry's consistency and his constantly seeking to be better, forced Liam Sheedy and his management team to opt for him ahead of All Star keeper Brian Hogan for the championship opener against Clare in Limerick two weeks ago.

And, despite two goals going past him, Barry acquitted himself very well, with his distribution of the ball, and his double save near the end being particular highlights.

Barry was always a pleasant chap with a warm smile, but he would sit down and study the game from the box, watching the moves, the shapes, the puckouts and the strategies being deployed before him. Little did any of us fortunate enough to have shared the box with him and his father realise, that a Tipperary senior hurling star was in the making.

Barry soaked it all up and just continued doing what he was doing - enjoying his hurling; loving the training and games; and thriving when called into the competitive environments of the county panels - taking his place in the 2018 All-Ireland semi-final at u21 level came out of the blue and he has managed to hold onto the top jerseys since.

And, he played a vital role in his clubs first ever County Tipperary senior hurling championship win in 2020 as his quick thinking lead to his sides title clinching goal in the last minute of the game - Barry had ball in hand ready to puck out even as the sliothar passed over his crossbar, and Kiladangan went downfield and snatched victory from the jaws of defeat to make history.

Despite his tender years, Barry Hogan is an experienced keeper and one who will continue to develop and develop as the years progress. Liam Sheedy and Tipperary are fortunte to have the two Hogan's to call upon.