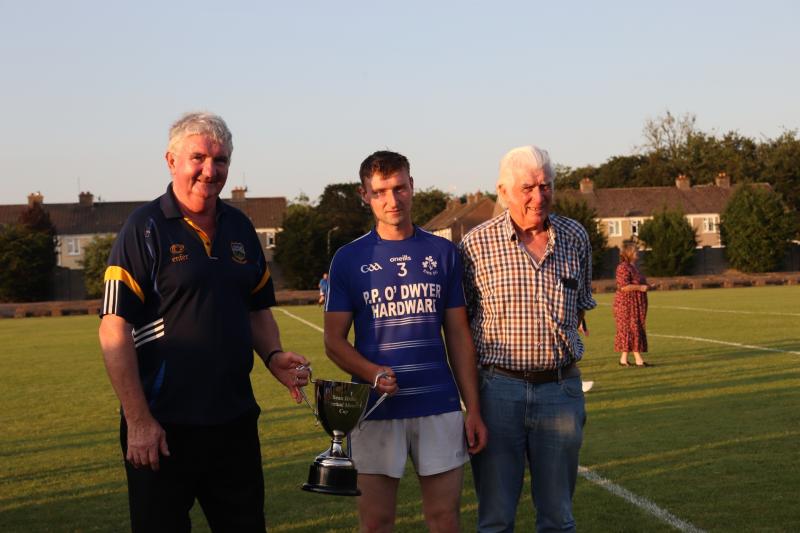 Eire Og Annacarty Donohill claimed a second ever Maria Marron Palmers Hill Stud West Junior B Hurling League title overcoming the challenge of Cappawhite on Tuesday evening in a sun-drenched Dundrum. In a repeat of the 2018 final, it was Eire Og who again came out on top. Despite the Cappawhite men holding a slender one-point advantage at the break, it was the Eire Og men who dominated the second half outscoring their opponents 3-10 to 0-4 in the second thirty-minute period. The Eire Og defence limited time and space to the Cappawhite attack especially in the second half as they struggled to trouble Jamie O’Dwyer in the Eire Og goal and were held to just five points from play. Eire Og’s attack though proved far more fruitful finishing with 3-12 from play.

The opening half was slow to get going with early scores all coming from placed balls. Ronan O’Brien put Eire Og two up but two Michael O’Neill points squared the game. Again, O’Brien was on target from a placed ball but Anthony Barry levelled at the other end. The eleventh minute saw the games only score from play, that coming from Eire Og’s Paudie Bradshaw and that’s the way the sides remained at the water break 0-4 to 0-3.
Connie Bradshaw stretched Eire Og’s lead on the resumption but Cappawhite drew level through points from Eoghan Ryan and Eoin Murray. Ryan’s point on the eighteenth minute their first from play. Cappawhite gradually got more into the game and opened up a two-point advantage with points from Eoin Murray and Anthony Barry to lead for the first time. Eire Og’s wing forwards Connie Bradshaw and Cian Mooney got off the mark but Anthony Barry’s pointed free just before the break saw the sides retire with Cappawhite ahead 0-9 to 0-8.

The pace definitely picked up in the second half with Eire Og bringing on Ailbe Ryan and Dan Hogan while moving the highly influential Ronan O’Brien to centre forward where he would get on a lot more ball and found more space. O’Brien pointed a placed ball and added another from play in the opening three minutes. Another Barry free levelled the game but then Eire Og took over. They opened up a two-point advantage before Ronan O’Brien hit a bullet to the net after some great work from Ailbe Ryan. Connie Bradshaw and Ailbe hit further points while Cappawhite struggled in front of the posts mainly thanks to a well marshalled Eire Og defence. Eire Og ahead at the water break 0-15 to 0-12.

Two goals in a minute put any hopes of a Cappawhite comeback to bed. Jack Kingston got on the end of a Jamie O’Dwyer free before working a goal while Ronan O Brien quickly added a third as Eire Og ran out comfortable winners 3-18 to 0-13.

Afterwards Michael Ryan C, Chairman of the West Board presented the Sean Breen Cup to Eire Og Annacarty Donohill captain Cathal Coughlan. The Cup had earlier been presented to the West Board by the Breen family to the memory of the late Sean an Eire Og player, who tragically died just over two years previous.