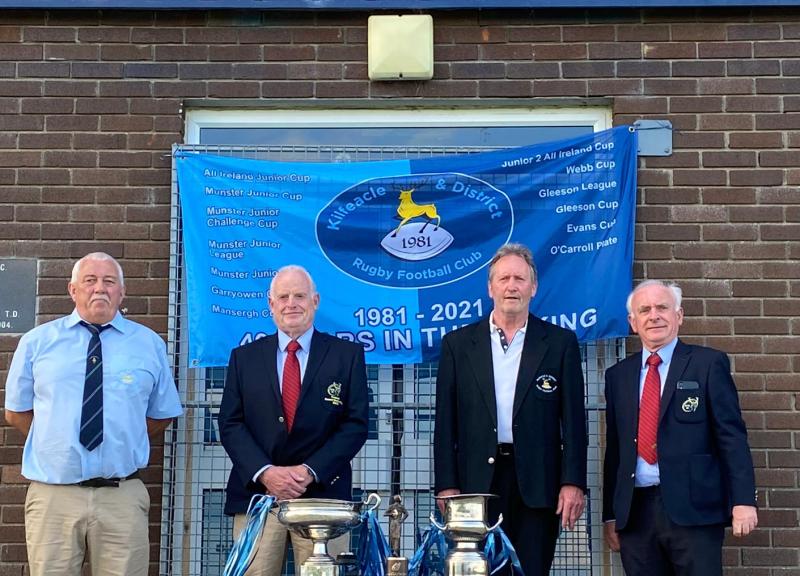 The winners of the 2020 Munster Rugby awards were announced online across Munster Rugby channels on November 2 2020, with 11 individuals and clubs recognised for their achievements throughout the 2019/20 season.
The prestigious Junior Club of the Year award was won by Kilfeacle and District RFC.
At the time the reasons for this award being presented were that since its formation in 1981, Kilfeacle and District Rugby RFC has become one of the strongest and most consistent clubs in Munster Junior Rugby.
2019/20 was a particularly special season for the Tipperary club, as they completed a unique double by winning both the All-Ireland Junior Cup and the Munster Junior League Division 1 title.
On the back of this success, they were invited to participate in this season’s Bank of Ireland Munster Senior Challenge Cup, where they defeated Bruff RFC in the opening round, before eventually bowing out to Shannon RFC. Another very exciting season lay ahead, or so we thought.
Fast forward to Tuesday July 13 last and a low key, socially distanced outdoor ceremony saw Kilfeacle and District RFC receive the award from Seán McCullough, Nenagh Ormond RFC, the president of the Munster branch; and Ger McNamara, the vice-president of the Munster branch for season 2020/21.
While adhering to socially distancing guidelines, both Séan and Ger were given a tour of Kilfeacle and District’s ever-improving facilities.
Club rugby in Ireland may have been in lockdown, but behind the scenes a series of improvements and initiatives have been taking place that will improve “the little club on the hill” for all involved.
Clubs like Kilfeacle and District are the grassroots of the game and play a vital role in the future of rugby in Ireland.
These improvements and initiatives are only made possible by the continued support from the club’s members and sponsors.
The community around “the little club on the hill” is tightly knit and supports and helps organise many successful fundraisers.
The club is now a number of years on from introducing its very successful split the bucket draw, and it extends its heartiest thanks to all who continue to supports the club each week.

This includes the pubs, shops and people who continue to sell the tickets weekly. A massive thanks is extended to them and to all who purchase tickets weekly; this draw would not be a success if it was not for your support.
For anyone who has not been at the clubhouse for a while, they will see many improvements that the club has been able to achieve, thanks to this money raised.
Kilfeacle put in a fabulous new bar and kitchen upstairs, upgraded the gym and windows, painted all downstairs during the summer months, and put in a new walkway and railing around the main pitch, allowing parents to walk around the pitch while training is on.
They power hosed and painted the outside of the club house, while the grounds people continue to keep the grass, pitches and hedges in pristine condition.
Just this week the club completed a major repair/upgrade of its light systems, plus many more improvements.
Kilfeacle and District RFC, with the continued support of all involved, will continue to keep upgrading its facilities and grounds thanks to the bucket draw.
When Covid restrictions are lifted further and competitions resume the club hopes to continue in the manner in which it stopped, that is to be an inclusive community-based club that strives to be the best it can both on and off the pitch.