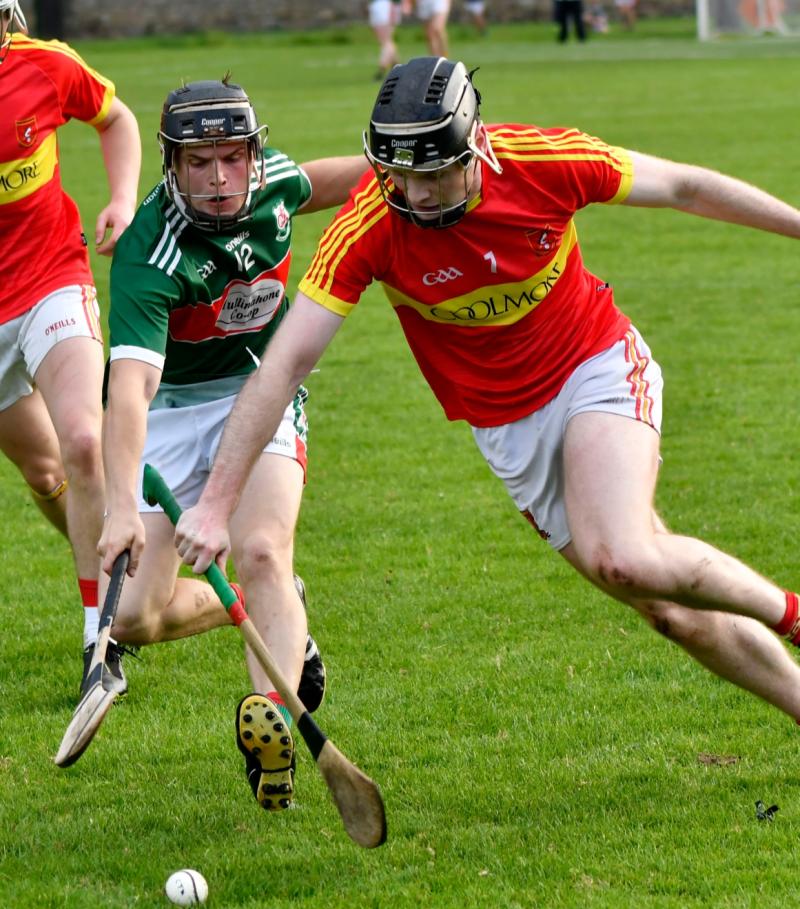 Killenaule won their 23rd south senior hurling championship, and their first since 2018, when they withstood Mullinahone's late rally in Saturday evening's Clonmel Oil-sponsored final at Clonmel Sportsfield.
After the teams were level five times in the early skirmishes, Michael Doyle gave Killenaule a 14th minute lead that they never relinquished, as Mullinahone trailed in their slipstream for the remainder of a highly entertaining contest that was always fiercely contested.
But The Robins were still forced to endure an anxious last six minutes (including additional time), as Mullinahone found the net twice and pressed hard to fashion an equaliser or even snatch an unlikely victory in a game that provided another memorable instalment of these clubs' great rivalry.
Killenaule were eight points clear and cruising when Ciaran O'Dwyer split the posts from a free with six minutes left on the clock. A minute later all hope seemed lost for Mullinahone when Eoin Kelly uncharacteristically missed the target from a free.
However they saw a chink of light less than a minute later. After Colin Shelly had cleared his lines, Eoin O'Dwyer set Martin Kehoe up to fire home their first goal.
Killenaule looked safe when man of the match Michael Doyle shot his seventh point from play in the 56th minute. But a minute and-a-half later the gap had been whittled down to just a goal. As Mullinahone stubbornly refused to hoist the white flag of surrender, Jack Shelly, moved into attack following a fine performance in the half back line, plucked a ball out of the air from a line ball and turned to blast a terrific shot to the roof of the net.
Ciaran O'Dwyer settled Killenaule's nerves with a point following Bubbles O'Dwyer's pass, while at the other end Killian O'Dwyer made a fine block from Martin Kehoe's shot. Eoin Kelly converted a late free but by then the door had been slammed shut on Mullinahone's comeback.
Michael Doyle gave a virtuoso display of shooting, as he raised seven white flags from play and made an immense contribution to Killenaule's success. He combined to good effect with John Bubbles O'Dwyer, with the county player also in fine fettle as he sprinkled some stardust on proceedings. He was businesslike from the very start, giving his team the lead after just 46 seconds when he gathered Ciaran O'Dwyer's sideline ball.
Ciaran O'Dwyer was an inspirational figure in the middle of the field while Joe O'Dwyer, Jimmy Feehan and Jack Hassett weighed in with steely defensive performances.
Killenaule were ahead by 0-7 to 0-5 at the first water break and led by 1-10 to 0-8 at half-time but their advantage was nowhere as sizeable as it should have been. Their goal, after 27-and-a-half minutes, had more than a touch of good fortune attached to it, although they could have added two more goals before the end of a half during which they shot nine wides, compared to Mullinahone's two.
When Bubbles O'Dwyer launched a shot that looked to be heading over the bar, Mullinahone goalie Alan Walsh, in his attempt to save the point, only succeeded in turning the ball into his own goal to put Killenaule in front by six points.
However the 'keeper redeemed himself a minute later when he made an important save from Eoin Barry to keep his side in the game. After Enda Keane had pointed for Mullinahone, Killenaule went close again when Dean O'Connor attempted to pick out an unmarked Eoin Barry in front of goal, but Barry failed to collect possession and the chance was lost.
While the second half was a more scrappy affair, it was no less engaging. After Eoin Kelly and Ciaran O'Dwyer had traded early points from frees, O'Dwyer scored from play following a great catch by Bubbles.
Mullinahone's cause wasn't helped by the five second half wides that they posted, compared to Killenaule's three, but a pair of converted frees from that man Eoin Kelly kept the men from Kickhams country in touch.
A Michael Doyle score on the three-quarter mark meant that The Robins led by 1-13 to 0-11 at the second water break. When play resumed they kicked for home in some style with three points in the space of just a minute from Bubbles (0-2) and Michael Doyle that put them in front by eight points.
However they still couldn't afford to relax, as Mullinahone rallied to keep the game alive in the closing stages. There seemed little prospect of a recovery as three Eoin Kelly points from frees were answered by two points from Ciaran O'Dwyer, the second from a free.
That was before those goals from Martin Kehoe and Jack Shelly gave Mullinahone a fighting chance, even if their brave effort ultimately fell short.
Eoin Kelly's eight points from frees ensured that Mullinahone had every chance of retaining the title that they last won two years ago. Even at the age of 39, the All-Ireland-winning Tipperary captain's only point from play, a wonderful strike from close to the sideline in the fourth minute, was one of the scores of the game.
Apart from Jack Shelly, Mullinahone's Kevin Walzer, Alan Curran and Colin Shelly defended resolutely. Kevin Bolger was industrious at centrefield while Enda Keane also gave his all.

The game was played in Golden this evening