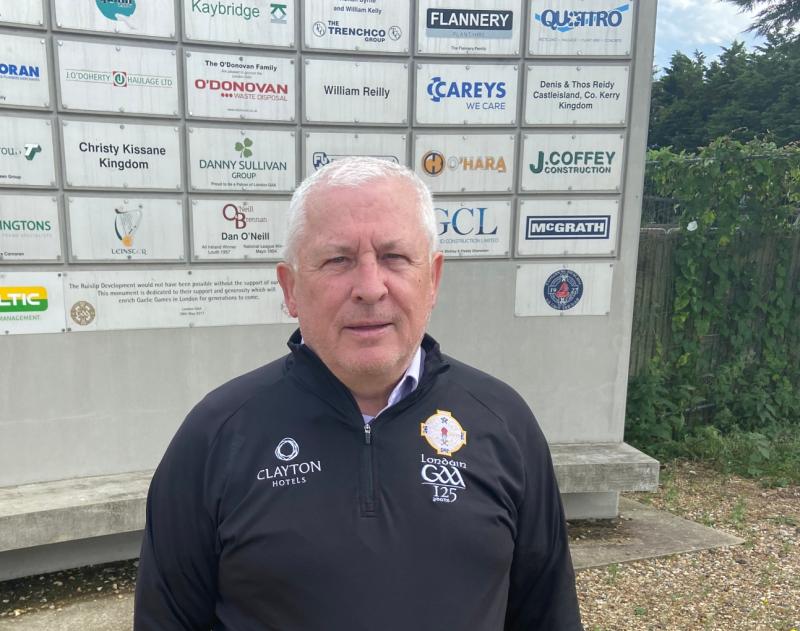 London GAA is approaching the culmination of its 125th anniversary celebrations.

Not since it hosted the 1996 GAA annual Congress in the Royal Lancaster Hotel in Bayswater, as part of the London GAA’s centenary celebrations, has there been such a thorough reflection of the development of Gaelic games in the largest GAA unit outside Ireland, as well as being a unit steeped in heritage with a proud history.

Elected at the beginning of the year, London GAA’s third Tipperary-born chairman and Granuaile clubman Donal Corbett, a former Shannon Rovers clubman, recently spoke about his role in leading the celebrations of this special year and also the importance of improving the profile of London GAA which, similar to the inter-county activities of all other exile GAA units has taken a back seat during the current pandemic.

But having also played a significant committee member’s role in the impressive development of South Ruislip-based London GAA’s impressive state-of-the-art headquarters at McGovern Park in 2017, it is also quite evident that Donal is a man with vision and ambition that includes achieving and setting many goals and objectives, both short and long-term.

Although there is plenty of archived evidence of playing activity in the London area long before the GAA’s foundation in 1884, it was not until 1896 that London was first affiliated to the GAA.

Two of the GAA’s most iconic, historical figures, Sam Maguire and London-born Liam MacCarthy also played a significant part in the formative years of London GAA. But it might come as a real surprise to some that Michael Collins also spent almost a third of his life in London. For nine and-a-half years, Collins resided in the west of the capital, emigrating from Cork to his elder sister Johanna in 1906 at the tender age of 15 to pursue a career as a post office clerk.

A memorial plaque stands outside the home they shared off the Goldhawk Road, at 5 Netherwood Road in Shepherds Bush. These days it would also have been a handy base for any young GAA player, just around the corner from the playing fields on the common at Wormwood Scrubs, or a 20-minute trip on the Central Line tube from Shepherd’s Bush out to South Ruislip.

Like many before and after him, Collins took comfort from Irish community groups when he first moved to London for work. He began to attend Gaelic League classes to learn the Irish language for the first time, and was also recruited by his local GAA club, Geraldines. In 1909 he was elected to the county board and became the Geraldines club secretary, a post he held until he left London in 1915.

London GAA president and Cork native Sam Maguire also worked as a senior clerk at the Post Office Savings Bank where Collins worked, and is widely reported as being the man who played a significant part in Collins’ induction to the IRB (Irish Republican Brotherhood) while living in London.

Meanwhile, London-born Liam MacCarthy was also chairman of London GAA for ten years and commissioned the manufacture of a trophy in the form of a mether, an ancient Irish drinking cup.

This cup was offered to the GAA's Central Council in Croke Park in 1921 and was gratefully accepted. It is awarded annually and in perpetuity to the winners of the All-Ireland senior hurling championship and also celebrates its centenary this year. And by a strange coincidence, this year’s winners Limerick were also the first recipients of that trophy.

London GAA's only senior All-Ireland victory came in the 14th staging of the hurling competition; the 1901 final against Cork. The game was actually postponed, and played in Jones' Road stadium in Dublin (before the GAA acquired sole ownership of the grounds in 1913 and renamed it in honour of Archbishop Thomas Croke), on August 2 1903.

London defeated Cork (Redmonds) on a scoreline of 1-5 to 0-4. Thurles man Michael McMahon was the only Tipperary representative on that team.

Apart from a famous All-Ireland quarter final victory over Galway in 1973 in Ballinasloe, London’s only other hurling successes have come in the junior, intermediate and All-Ireland ‘B’ grades and more recently winning two Nicky Rackard Cups and two Christy Ring Cups.

In football, London played mainly in the junior and intermediate grades until they were affiliated to Connacht in 1975.

Although they recorded their first victory in Carrick-on-Shannon against Leitrim two years later, the Exiles had to wait until 2013 for their next historic Connacht championship victory over Sligo. That unforgettable year for the Exiles also included a defeat of Leitrim, after a replay in the semi-final, before reaching their one and only provincial final against Mayo.

Two years previously, after giving Mayo a real scare, London defeated Fermanagh in an All-Ireland first round qualifier. In 1993 London were also admitted to Division 4 of the National Football League and have competed there ever since.

The major development in Gaelic games activity in recent years has been the increase in the uptake of the game by London-born players, including players from other ethnic minorities. It is not surprising therefore that London has enjoyed considerable underage success at the annual Feile in both football and hurling.

This success has also been driven by the emergence in 2011 of the All-Britain Championships (ABCs), which has been designed as the feeder competition for the annual Feile. Another significant development in playing activity came at the annual Third Level education competitions in the 90s when St Mary’s College in Strawberry Hill enjoyed much success in the early years, including winning the Trench Cup in 2004.

GAA chairman and Coolbaun native Donal Corbett has placed much emphasis on GAA promotion at underage level and is encouraged by the growing number of London-born players on the county team.

“The number of London-born players, led by team captain Liam Gavaghan and also London-born manager Michael Maher, is very encouraging for the future of the game here,” said Donal.

It was quite appropriate then that this year’s London 125 celebrations should begin with a GAA Youth Festival, involving U7s right up to U14s in hurling and football over two weekends at McGovern Park last July.

Launching the festival, London GAA Youth chairperson Joel McInern said the committee was “excited” to welcome its players, members and their families to McGovern Park as part the county’s 125-year anniversary celebrations and he complimented London GAA chairman Donal Corbett on promoting the idea of a special sports festival in this special year.

“Donal Corbett has been involved with the London's youth structure for many years and wanted the youth to be at the centre of this unique milestone, as it is the youth players today who will be the driving force behind the success of London GAA for decades to come,” said McInern.

He added: “It’s incredible to think that our young players are following in the footsteps of Michael Collins, Sam Maguire and Liam MacCarthy, who all played GAA in London at various points through their journey in becoming legends in our rich Irish folklore.”

This special year’s celebrations for London GAA will conclude in this month of October with commemorative games, a gala dinner and a golf classic at Aldenham Golf and Country Club on October 15.

London GAA is holding its annual gala dinner at the stunning Clayton Hotel, Chiswick. A table of ten costs £600.

London GAA is holding its annual golf classic at the newly-refurbished Aldenham Golf and Country Club on Friday October 15.
Breakfast (tea/coffee/bacon roll) will be provided for all players prior to a shotgun start.
Following a day of play on the traditional parkland course, a three-course meal will be provided for all players. There will also be an auction, with some fantastic prizes. Team Entry costs £400, a hole sponsorship costs £100 and a programme advert is £100.

If you wish to lend your support to the events, or to discuss sponsorship opportunities, please get in touch with one of the following: