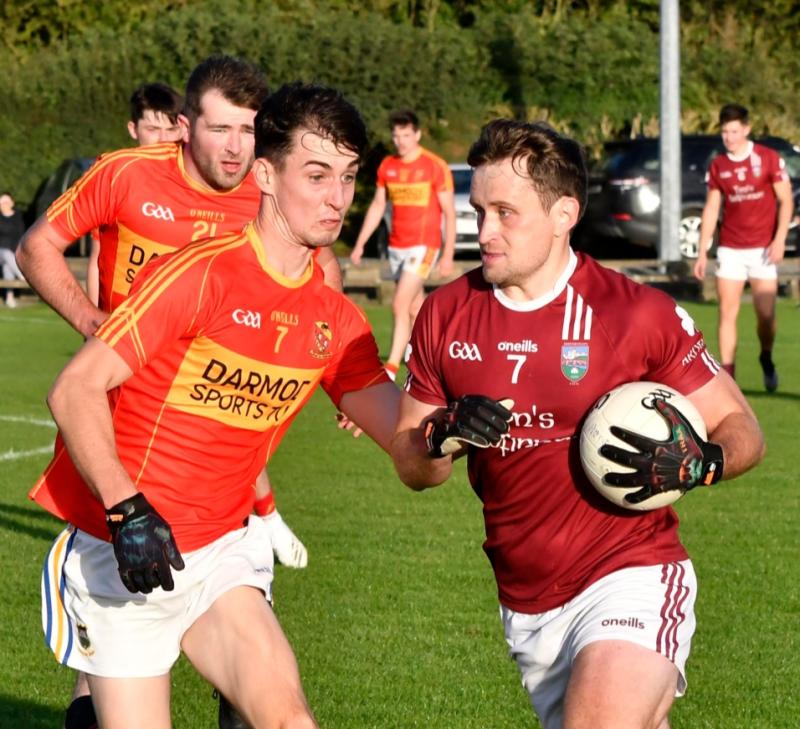 Ardfinnan got their championship campaign back on track with a hard-fought win over a battling Moycarkey-Borris side at Golden on Sunday evening, the south side bouncing back from a heavy defeat to champions Commercials in the opening round.
The Village side needed to win this game but they were pushed all the way by a Moycarkey-Borris team balancing senior hurling and football commitments on alternate weekends.
Wayward shooting cost them dearly at times in front of goal but at the other end of the field their defence was tigerish, almost Tyrone-like, as they smothered Ardfinnan’s best efforts with a wall of red and gold.
After the sides were level four times in the first half, Ardfinnan edged in front by the break, 0-5 to 0-4.
Points from the impressive Michael Barlow and Luke O’Brien put them three in front three minutes into the second half but Jack Fallon, Diarmuid Maher and Kyle Shelley tied the scores again within five minutes.
Two points from Gerry Cronin, one a free, and another from Billy Hewitt with a sweet effort, put the south team three ahead by the water break. And although they were never headed again, they had a battle to maintain their lead.
In the last action of the game, they formed a maroon wall on their goal line to prevent a goal from a Rhys Shelly fourteen metre free, whose shot just shaved the crossbar and went over for a point.
Missing county star Colm O’Shaughnessy through injury, Ardfinnan still looked to have enough firepower to navigate this tie, as they put their slick passing play into action with Gerry Cronin, Michael Barlow, Billy Hewitt and Darragh O’Leary leading the charge.
However there were occasions when they tried one, two or three passes too many when a more direct route might have paid better dividends.
It looked to be going to plan when a swift move saw a Gavin Whelan goal-bound shot saved on the line from a Sean Nagle pass, and Hewitt followed up with the opening point after two minutes.
But Ardfinnan realised they were in a battle when Kyle Shelley pointed a free following a foul on Niall Heffernan in the sixth minute, and followed up with a super strike from the right wing from a Tom Ryan kicked pass to put Moycarkey ahead in the eighth minute.
Ardfinnan rose to the challenge with scores from Darragh O’Leary and a Hewitt free, before a Rhys Shelly free tied the scores again. Hewitt and Kyle Shelly exchanged frees before a classy point from Barlow put the maroons a single score ahead at the break.
It could – and should - have been a bigger lead as following one of the best moves of the game, Gavin Whelan passed to Andrew Browne to shoot past Paul Dempsey in the Moycarkey goal. However, after consulting with his umpires, referee Paddy Russell ruled a square ball infringement.
Ardfinnan didn’t let that affect them and within forty seconds of the restart Barlow hit a superb point, quickly followed by another from Luke O’Brien.
But again they couldn’t keep daylight between them and Moycarkey with three in-a-row following from Fallon, Maher and Shelly.
The next three in-a-row from Cronin (2) and Hewitt proved conclusive, and when Kevin O’Regan pegged one back for the mid men, back came Ardfinnan again with another three from Barlow, Whelan and Hewitt to wrap up the points before Shelly’s injury-time score.
Ardfinnan: Michael Goonan, John Condon, John Ryan, Robbie Condon, Jason Coffey, Sean Nagle, Michael O’Sullivan, Gerry Cronin 0-2, 1 free; Darragh O’Leary 0-1; Luke O’Brien 0-1; Gavin Whelan 0-1; Billy Hewitt 0-5, 3 frees; Michael Barlow 0-3; Andrew Browne, Dylan Nugent.
Substitute: Darragh O’Brien for Nugent.
Moycarkey-Borris: Paul Dempsey, Peter Melbourne, Kevin O’Regan 0-1; Kevin Moran, Niall Heffernan, Tom Ryan, Bill Maher, Eamon Flanagan, Eoghan Hayes, Diarmuid Maher 0-1; James Dillon, Jack Fallon 0-1; Darren Flood, Kyle Shelly 0-4, 2 frees; Rhys Shelly 0-2 frees.
Substitutes: Brian Maher for Diarmuid Maher, JJ Darmody for Flood, Brendan Looby for Dillon, Mark Heffernan for Fallon.
Referee: Paddy Russell (Emly).