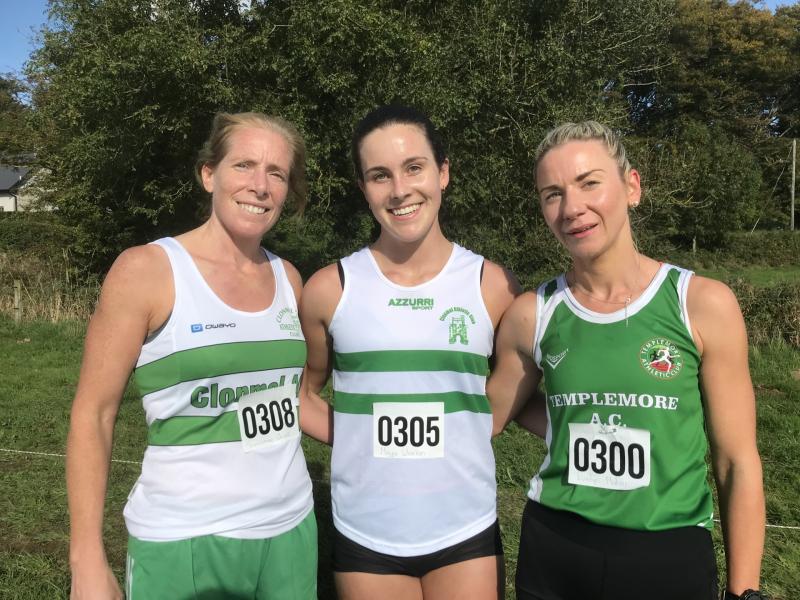 Galbally was the venue for the County Intermediate men’s and women’s Cross-Country Championships on Sunday last and everyone was greeted with Mediterranean type weather.

COUNTY TIPPERARY INTERMEDIATE WOMEN’S CROSS COUNTRY CHAMPIONSHIP
The women’s race over 5k once again attracted a very good entry with six club colours on the starting line, brilliant.
Right from the start the pace was strong and as they headed out on the first of the three big lap a group of three athletes set the tempo made up of Catherine Fogarty of Dundrum, Louise Fogarty of Moyne and Moya Whelan of Clonmel, the eventful champion with the chasing pack not too far behind.
Going out on the final lap the leading group now consisted of four with Evelyn Maher of Templemore and Suzanne Shine of Clonmel joining Whelan and Fogarty at the front.
As the leaders headed down the back stretch with about 1km to go, Moya went to the front with Evelyn in close attention and the pace was increased. Then as the leaders negotiated the second last bend Moya opened a gap and she maintained that lead all the way to the line.
The battle for the bronze medal was decided over the final 400m as Suzanne Shine edged in front of Catherine Fogarty.
For the record Louise Fogarty of Moyne 5th and Lisa Quinlan of Moyne 6th.
In the team event with Elaine Horgan of Clonmel finishing 7th, the combined efforts of Moya, Suzanne and Elaine ensured that the cup was going back to Clonmel after a lapse of three years.
The silver medals were won by the combined efforts of the Moyne trio of Louise, Lisa and Sinead Tyan who was 8th. The bronze medals were won by the Dundrum team of Catherine Fogarty, Eimear Loughman 9th and Mairead Julian 14th.