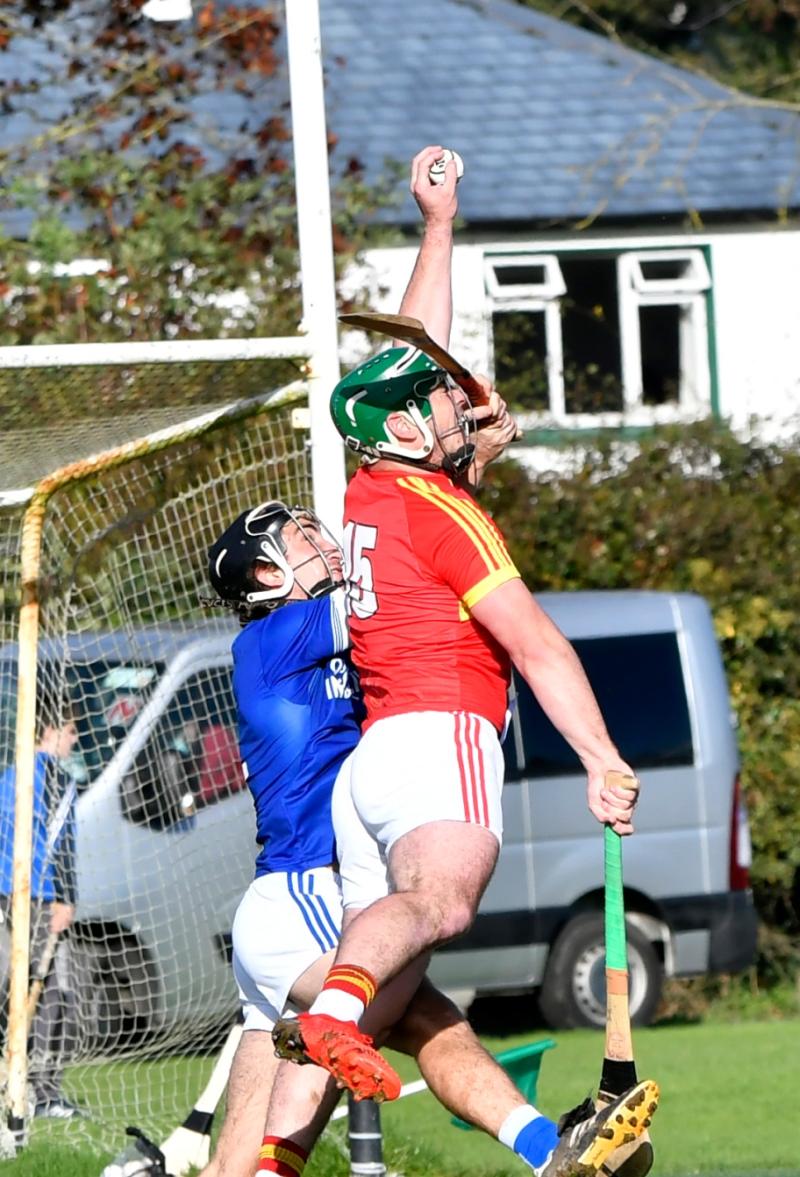 Killenaule took a significant step towards securing their return to the top tier of the county senior hurling championship when they scored a deserved win over St Mary's in the Seamus O'Riain Cup semi-final at Golden this afternoon.
There was little to separate the sides in the opening half, with The Robins holding a 1-9 to 0-9 lead at the midway stage. But once a stronger and more experienced Killenaule team dialled up the tempo by a few notches early in the second period and extended their advantage, they always bore the appearance of the likely winners.
They were pushed all the way by St. Mary's, whose spirited performance twice saw them reduce the leeway to a goal in the last five minutes. The Clonmel team gave it everything and played a decent brand of hurling but they couldn't make it count enough on the scoreboard, where it mattered most.
He may have been relatively quiet in the first half but John Bubbles O'Dwyer stamped his class on the proceedings in the second half. Sean Kennedy had a St. Mary's point from a free within a minute of the restart but in the 35th minute Bubbles finished a move created by Ciaran O'Dwyer and Michael Doyle with a one-handed shot to the net to open a five-point gap and put his side in control.
St. Mary's almost produced an immediate response when Ross Peters' goalbound shot, after he accepted Sean Kennedy's pass, was blocked by Killian O'Dwyer, who had an outstanding game at corner back.
After scores from Ciaran O'Dwyer's free and Michael Doyle pushed Killenaule seven clear, as they began to stretch their legs, Bubbles was at it again two minutes later when he rose like a salmon to pluck the ball out of the air and send it straight between the posts.
Ciaran O'Dwyer and Sean Kennedy traded further scores from frees before Seamus Kennedy offered the Clonmel side a glimmer of hope 13 minutes from the end, driving a penalty to the net in the last action before the water break after Josh Ryan had been hauled down.
That left five points between the teams, and when play resumed Killenaule responded with another smart point from Bubbles, before further scores at opposite ends from Sean Kennedy (free) and Dean O'Connor.
Six points behind, a lesser side would have folded at that stage, but St. Mary's kept plugging away. Points from Sean Kennedy's free, Seamus Kennedy and Niall Hoctor from play left just a puck of a ball in it by the 25th minute.
Bubbles was on target from a free but Seamus Kennedy and Ross Peters set Sean Kennedy up for the point that again left just a goal between them with two minutes of normal time remaining.
Despite suffering a late scare when a speculative lob from Seamus Kennedy bounced to safety off the crossbar, Killenaule embellished the victory with further scores from a Bubbles free and Mark Stakelum.
Killenaule are favourites to win the competition when they meet Templederry Kenyons in the final in a fortnight's time. They have a powerful team that has fine hurlers in every line and if they hit form in the final they'll take some stopping.
Paddy Codd, Killian O'Dwyer and Joe O'Dwyer were at the top of their game in defence, their dominance underlined by the fact that St. Mary's managed just seven points from play.
While Bubbles was the standout performer, he had a strong supporting cast in attack, with Ciaran O'Dwyer, Michael Doyle and Eoin Shaw also making their presence felt.
Shaw had their opening goal in the ninth minute when he capitalised on some hesitancy in the St Mary's defence to give them the lead (1-2 to 0-3). They could have had another three minutes later but this time Bubbles, giving another example of great fielding, was denied by Enda Dunphy's superb save.
After Ciaran O'Dwyer's accurate 65 put Killenaule three clear by the 12th minute, St. Mary's enjoyed their best spell, with four points on the bounce. Cathal Deely got the ball rolling before Ross Peters (0-2) and Seamus Kennedy's free had them a point ahead in the 17th minute.
As they kept pressing, Michael Murphy's shot was saved by Killenaule goalie Jonathan Gleeson at his near post.
Michael Doyle equalised just before the water break and they were three ahead by the interval, thanks to a brace of scores each from Ciaran O'Dwyer and Eoin Shaw, with the Clonmel team's sole reply in that period coming from Sean Kennedy's free.
St. Mary's disappointment should be offset by this young team's progression to the penultimate stage of the competition. And with the gains made at U17 and U19 level this year, their prospects are encouraging.
Seamus Kennedy provided plenty of leadership while Cathal Deely, Sean Kennedy and Ross Peters were always busy in attack. Jamie Peters, Liam Ryan, Michael Murphy and Joe Gunne also gave everything for the cause.
Killenaule: Jonathan Gleeson, Jack Hassett, Paddy Codd, Killian O'Dwyer (captain), Jimmy Feehan, Joe O'Dwyer, Liam Meagher, Tom Stakelum, Eoin O'Connell, Ciaran O'Dwyer ​(0-6, 4 frees, 1 '65), Michael Doyle (0-4), Mark Stakelum (0-1), ​Eoin Shaw (1-2), Dean O'Connor (0-1), John O'Dwyer (1-4, 0-2 frees).
​Substitute: Darragh Fitzgerald for Ciaran O'Dwyer.
St. Mary's: Enda Dunphy, Joe Gunne, Liam Ryan, Richie Gunne (captain), Tadhg Condon, Jamie Peters, Sammy Ryan, Jason Lonergan, Michael Murphy (0-1), Cathal Deely (0-2), Sean Kennedy (0-7, 6 frees), Darren Cass, Ross Peters (0-2,1 free), Seamus Kennedy (1-3, 1-0 penalty, 1 free), Peter McGarry.
Substitutes: James Morris for Sammy Ryan, Niall Hoctor (0-1) for Darren Cass, Eoin McCarthy for Jason Lonergan, Josh Ryan for Peter McGarry.
Referee: John Dooley.