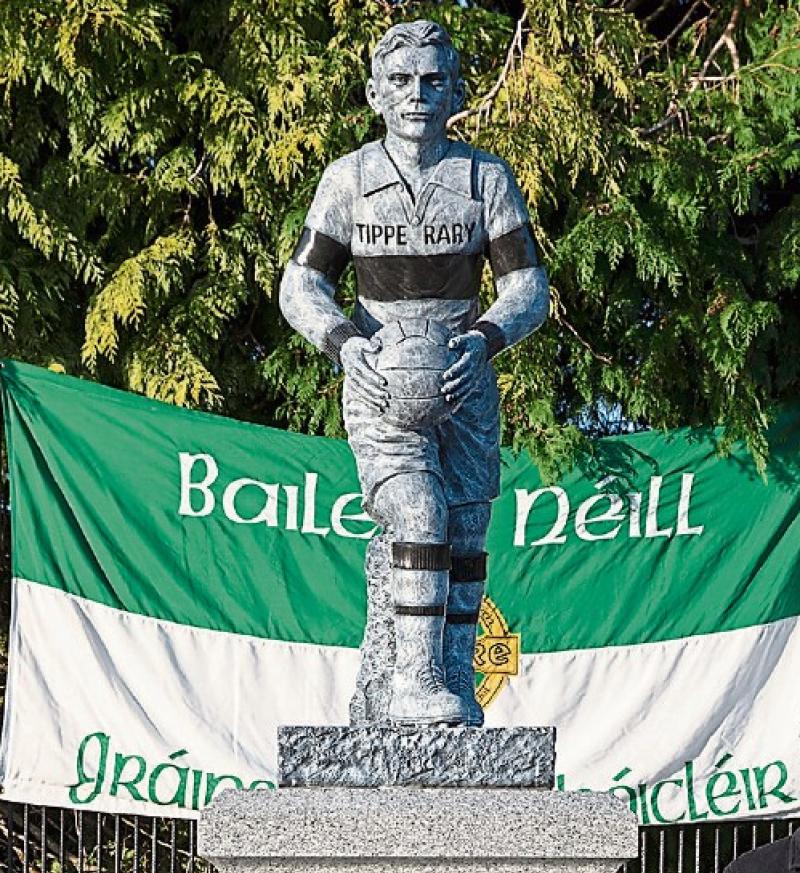 Grangemockler, the home of Michael Hogan, will be hoping the County Intermediate Football title will be back in the village on Sunday evening next.

The curtain-raiser to Sunday’s FBD Insurance senior football final at Semple Stadium, Thurles, is the intermediate decider between Grangemockler Ballyneale and Drom/Inch, throw-in at 12.30pm.
Twelve months on from their defeat in last year’s final against Rockwell Rovers in Clonmel, Grangemockler will be hoping to go one better this time around, secure their first county intermediate title since 2003 and most importantly get that all-important pass to senior football for next year.
Most will expect the Liam Walsh-managed south Tipperary side to start as favourites, having progressed to this year’s showpiece undefeated, with group wins against Mullinahone and Clonmel Óg, followed by impressive knockout stage victories over Clonoulty Rossmore in the quarter- final and Galtee Rovers St Pecaun’s in the semi-final.
Progress has been very steady around Michael Hogan country for the past couple of seasons, with underage success - they won a county minor title in 2019 - beginning to reap rewards with their intermediate side over the last couple of years. In last year’s county final they came up against a more seasoned and more physically developed Rockwell Rovers outfit, who won by 2-10 to 0-9, but hopes are high that the extra 14 months since the 2020 showpiece will have strengthened this young side for the big battle ahead on Sunday.
In the last eight they produced a clinical display in routing a well-respected Clonoulty Rossmore side by 4-14 to 1-5.
And in the 3-11 to 1-7 semi-final win against Bansha in Cahir they produced another impressive performance of hard running, excellent support play and sublime finishing that had them home and hosed well before the end. No doubt their form is very good at present.
They will also look encouragingly to last year’s county semi-final, in which they beat Sunday’s opponents by 1-14 to 1-9. They won’t fear the mid side going into this all-important clash.
Grangemockler will look for more good displays from the Lyons - John, Joey and Mikie - Ben Comerford, Leon Kennedy, Sean Daly and Manus McFadden to lead them to victory. After last year’s final setback they will know that they will need to be at the top of their game to get their hands on that coveted silverware.
Drom/Inch, county intermediate champions themselves in 2014, will be hoping to get back to senior, having lost that status in 2018 after four years at the higher grade. Very much a banana skin for the more established senior teams on their day, Drom/ Inch are a side capable of competing well when totally focused on the big ball - as against a club trying to spread themselves too thinly when involved in the business end of thehurling.
With the early elimination of their hurlers from the Dan Breen Cup this year, football at Bouladuff has featured more prominently, and following an opening day group stage loss to Galtee Rovers, Drom have now put four consecutive wins together and are fully deserving of a place in Sunday’s final.
They easily dismissed both Cashel and Fr Sheehy’s in their last two group games before edging out the always hard-to-beat Golden/Kilfeacle by a single point, 1-9 to 1-8, at the quarter-final stage.
Up against Fethard in their semi-final, they were too strong up the middle and elsewhere for The Blues and ran out comfortable winners by 0-10 to 0-5 at Littleton.
Drom’s key player will be their county man Emmet Moloney but their strength is in their collective, with David Collins a proven scoretaker, Jimmy Mullen sharp on frees, and plenty of experience throughout the field in Seamie Callanan, Colm Kinane, John Ryan, David Collins and David Butler.
This final may well come to which team wants it the most. No doubt, Grangemockler’s tradition would love to see them back at senior level and it will take something special from Drom to deny them that.