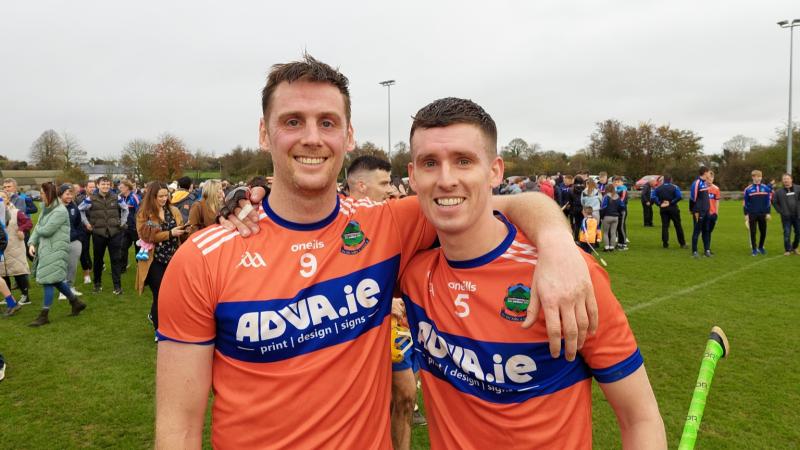 A whirlwind final quarter by Skeheenarinky in which they blew away Holycross/Ballycahill by 10 points to no score saw them crowned County Junior A Hurling Champions for 2021 at Golden on Saturday afternoon.

It was an amazing turnaround to the game as up to that point Holycross looked the more likely winners, keeping just ahead of their opponents, but in the final 15 minutes or so the south champions found an extra gear and pulled away to win convincingly by seven points in the end.

When the mid Tipperary side went 0-12 to 0-9 up, following a point by Jamie Lee Dwan in the 43rd minute, they looked destined to make up for the disappointment of losing last year’s county final by a single point to Arravale Rovers. Amazingly though that was to be their last score of the game, they failed to raise a flag for the next 17 minutes plus of hurling.

Skeheenarinky emerged from that second half water break three points in arrears but within two minutes, following points from Adrian English, Conor Sweeney and Darragh Brennan, the sides were all square.

Skeheen’ hit the front for the first time in the 52nd minute when half-time substitute Mikey Maher pointed and suddenly all the momentum was with John Lacey’s side. Centre-forward Tomás Vaughan then scored a rousing point after evading a few challenges, soon followed by an excellent effort from Conor Sweeney after Darragh Brennan had fielded superbly to create the chance.

In a blistering six minutes Skeheenarinky had gone from three down to three up, all from play, and Holycross were now in serious trouble against a fast-finishing and fitter-looking side.

Two further frees from Tomás Vaughan who was impeccable from placed balls over the hour, scoring six, put Skeheenarinky 0-17 to 0-12 ahead. At this juncture the Holycross forwards were  getting little change from a defence in which Fionan Ó Súilleabháin was hurling magnificently, sweeping up any potential danger from the 45m line back.

With the clock well into the red and no chance of a comeback for Holycross, Skeheenarinky tagged on two more white flags from John O’Callaghan, who had worked tirelessly all through, and the final score of the day from Tipperary football captain Conor Sweeney. 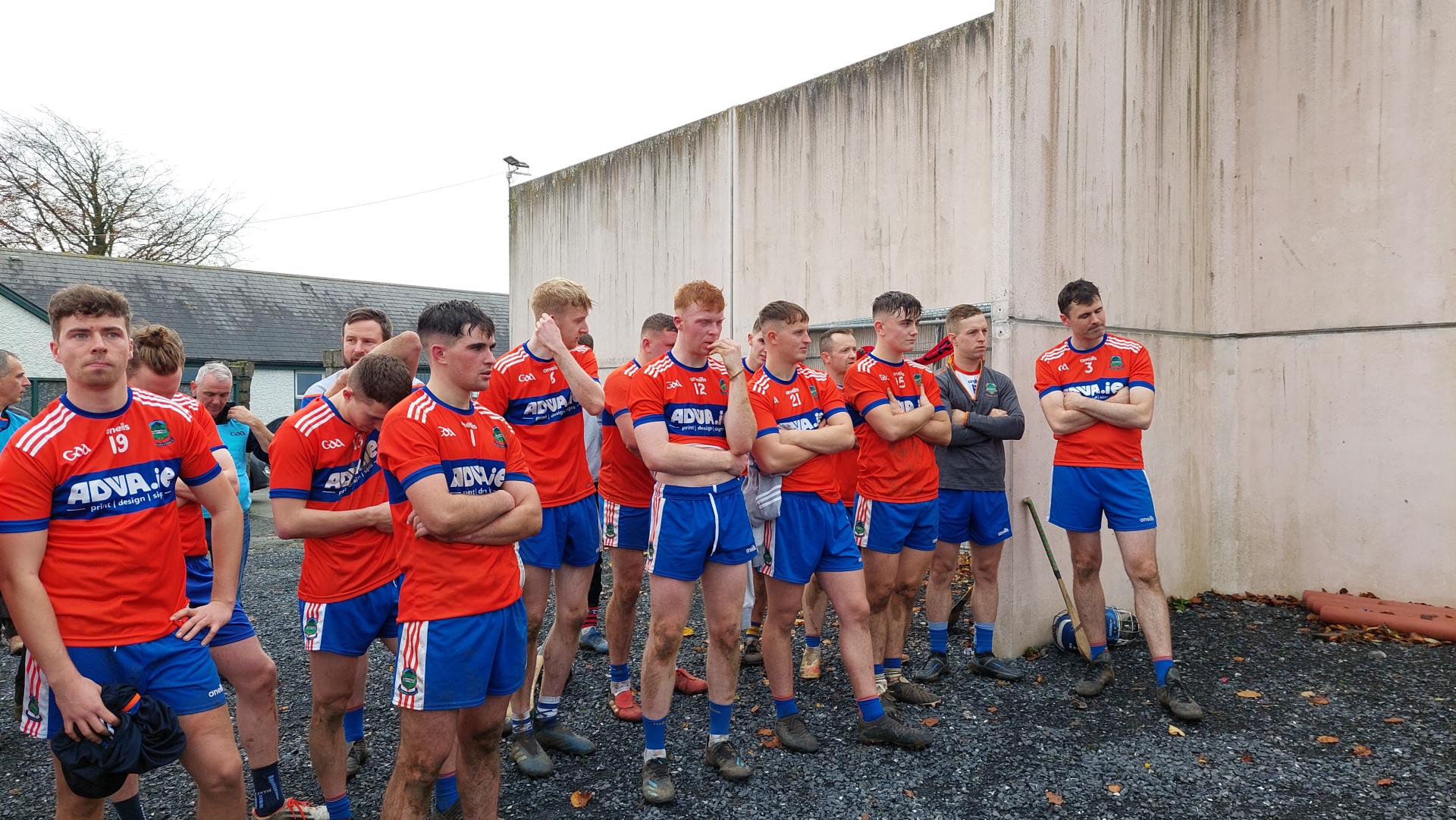 Some of the Skeheenarinky players listen to the words of their captain after their great win over Holycross in today's county Junior A hurling final played at Golden.

When proceedings got underway, Holycross had much the better of the first quarter and led by 0-5 to 0-2 at its conclusion. They looked at that stage to have a little more hurling in them, all their five scores coming from play compared to just two Tomás Vaughan frees for the south champions.

Holycross full-forward Liam McCullagh opened the game's scoring with a point from the standside in the second minute, and another from John Dunne in the seventh minute had the sides at 0-2 apiece at that stage, Skeheen's points both Vaughan frees.

However, three unanswered points for Holycross towards the end of the first quarter from Jamie Lee Dwan, Stephen Quinn and David Manning sent Paudie McGrath’s side to the first water break looking the more assured.

It took Skeheenarinky all of 23 minutes to register their first point from play from Conor Sweeney but Holycross quickly nullified that with another John Dunne point, the corner-forward capitalising on a poor puck-out.

A pair of frees each by Tomás Comerford and Tomás Vaughan made it 0-9 to 0-5 in favour of Holycross by the 30th minute before Dean Finn put over a fine individual point for Skeheenarinky, catching Aidan Treacy’s puck-out, making space, and splitting the uprights, to reduce the deficit to three points at half-time.

A goal chance for Darragh Brennan right at the start of the second period was well saved by Holycross keeper Ewan Bourke but Skeheenarinky still managed the opening score of the half when Adrian English scored in the third minute.

The scores for Holycross were now becoming harder to find and it wasn’t until the 39th minute that they raised their first flag of the second half, a free by goalkeeper Bourke from the sideline.

Dean Finn, who was very prominent throughout the game, then drove home two rallying points for Skeheenarinky within a minute of each other, the second one in particular brilliant after Rian O’Callaghan and Conor Sweeney intelligently created the space, and the now flying Finn obliged with the finish.

Now just a point behind after 40 minutes of hurling, Skeheenarinky were threatening but two quick scores for Holycross, from a Tomás Comerford free and a well-taken effort from Jamie Lee Dwan, halted that progress allowing the mid champions go to the second half water break leading 0-12 to 0-9.

But for Holycross there was to be no final quarter it turned out, that last 15 minutes plus added time totally dominated by a Skeheenarinky side, who drove on mercilessly to score 10 points unanswered and deservedly they captured their first County Junior A hurling title since 2014.

That prospect looked a tall order for them at the outset having lost two of their key players for the final, Tommy Sweeney who scored six points in the semi against Galtee Rovers was out with a shoulder injury while the always influential Noel Vaughan was missing due to suspension.

But the performance they did find on the day, especially in that dominant final quarter, was something special for the Ballyporeen-based hurling club.

Their defence stood up well, limiting Holycross to just a single point from play for the entire second half. Captain Fionán Ó Súilleabháin at wing-back was superb, especially in that second period, ably assisted on the half-line by Riain O’Callaghan and Oisin Brennan.

In midfield Conor Sweeney, with four points from play, and the warrior workhorse John O’Callaghan, got more on top as the day progressed, while up front Tomás Vaughan, Dean Finn, Adrian English and Darragh Brennan were prominent; Mikey Maher also hurled a world of ball after coming on at half-time.

For Holycross it will be a bitter pill to swallow, losing a second consecutive county final, having looked the more likely winners again up to half-time against Skeheenarinky. The fitness of the senior footballing club that is Ballyporeen though became more obvious as the day went on and Holycross tired more noticeably down the stretch.

Over the hour they had good displays from Stephen Ryan at centre-back, Kieran O’Dwyer and Tomás Comerford who had a big battle at midfield, while Jamie Lee Dwan and John Dunne looked the most dangerous of the forward division.