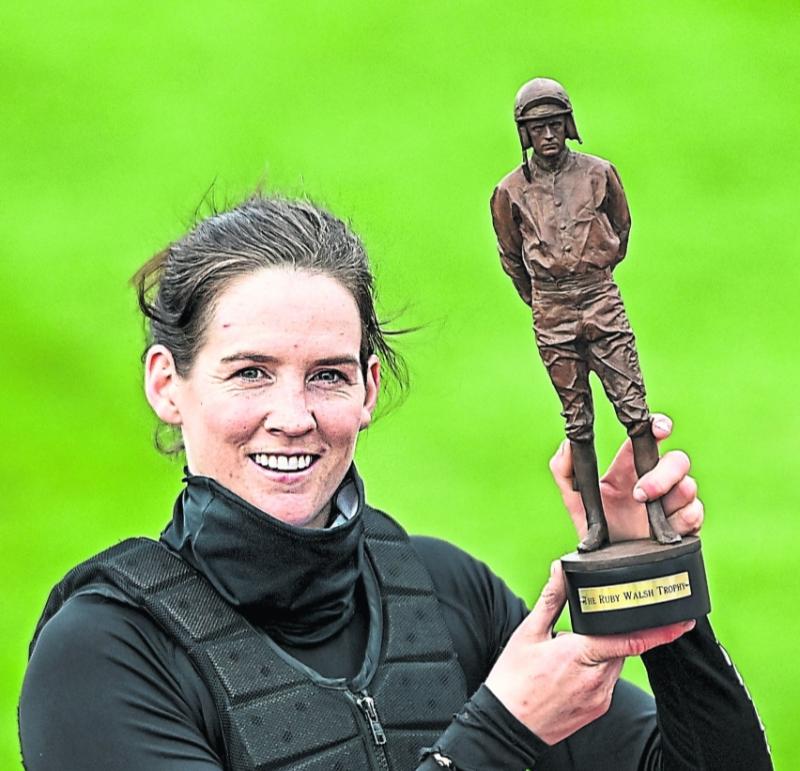 Rachael Blackmore has been in great form this season. Picture: Hugh Routledge/Sportsfile

Rachael Blackmore will be honoured with the 2021 Irish Racing Hero Award at the annual Horse Racing Ireland Awards next month.
And with the way she has started the National Hunt season in Ireland and Britain, who’s to say she won’t be in the running for the award again next year.
Her latest headline-grabbing feat came in the SSS Super Alloys Novices’ Chase at Cheltenham last Friday, when the Killenaule jockey somehow managed to stay on board Gin on Lime after the mare and her only rival in the race, My Drogo, had slipped up at the second last fence.
Blackmore incredibly kept the partnership intact and completed an amazing recovery by jumping the last and cantering home unopposed to collect the winner’s prize of £13,000.
The 7/4 chance Gin on Lime is owned by Clonmel man Brian Acheson and races in the Robcour colours. The previous weekend at Naas, Blackmore had ridden four winners for the first time in her career, and followed up by winning the Grade 2 Fortria Chase on Notebook in Navan the following day.
Earlier this year, Rachael’s pioneering exploits were hailed the world over. At the Cheltenham Festival in March she became the first woman to claim the Leading Jockey title with six winners, a haul that included the Champion Hurdle aboard Honeysuckle. In doing so she became the first female rider to win the Champion Hurdle.
She reached even new levels at Aintree only weeks later, becoming the first woman to ride the winner of the Grand National with her success on Minella Times, a horse previously owned by Clonmel hotelier John Nallen.