Drom/Inch too strong for Grangemockler in Tipperary intermediate football final

A dominant performance by Drom/Inch footballers gave them a trap-to-line victory over Grangemockler/Ballyneale in the County Intermediate Football Championship final at Semple Stadium this afternoon (Sunday).

In the curtain-raiser to the senior decider, the mid champions proved too strong all round for Grangemockler and were fully deserving of their eight points victory at the final whistle.

The foundation for Drom’s success was built on a storming first half in which they outscored the opposition by 2-7 to 0-4. Thereafter Drom never looked likely to be denied their first county crown since 2014, and the Bouladuff club now find themselves back at senior grade next year having lost that top status in 2018.

South champions, Grangemockler, having waited a full twelve months to put the disappointment of last year’s final defeat to Rockwell Rovers behind them, found themselves on the backfoot from the first whistle against a fast-starting Drom. Within three minutes both Robbie Long and Jimmy Mullen had scored to settle The Ragg side, before Sean Daly opened Grangemockler’s account in the fifth minute.

David Collins, a solid target man at centre-forward, restored Drom’s two points advantage almost immediately and that lead was out to five by the 11th minute with the game’s first goal. Drom midfielder Jamie Moloney weaved his way around a few tackles to offload to Podge Campion who rifled to the top of the net from close in to give his side a 1-3 to 0-1 lead.

Jimmy Mullen stretched that cushion to six in the 14th minute when he took a quickly delivered sideline pass to point, before Grangemockler got the final score of the first quarter, a free by Jamie Walsh after John Lyons was impeded.

When play resumed Drom’s Podge Campion and Jamie Walsh for Grangemockler exchanged points, the latter coming after good work by Colin O’Shea to make the chance.

Another free from Walsh, who was to be his side’s main source of scores in the final, narrowed the gap to four points in the 23rd minute but it was to be Grangemockler’s last score of what was for them a very disappointing opening half.

A physically stronger Drom were content to play the possession game and that ploy led to their next point from David Collins after a long period of passing, the centre-forward converting from 40 metres out.

The game was more or less decided in the 26th minute of the opening half when the second goal arrived for the Micheál Butler managed side. David Butler and man-of-the-match Robbie Long were very much involved in the build-up before Jamie Moloney slipped the ball low into the net for a 2-6 to 0-4 advantage for Drom.

That gap was out to all of nine points by the interval when another well constructed move linking Seamie Callanan and David Butler saw wing-back Robbie Long kick his second point which, had he kept it lower, might have been a third goal.

The start of the second period saw Grangemockler make some inroads into that significant Drom/Inch lead and by the second half water break they had the margin back to six at 2-8 to 0-8.

Jamie Walsh got the second half scoring under way with a point from the edge of the D. But it was quickly cancelled by David Butler with a point in the 36th minute, created by the  strong running of the impressive Jamie Moloney.

Two Jamie Walsh frees, won by the work of Ian Brett and Thomas Dineen, kept Grangemockler in the hunt before a fine point from 35 metres by Ben Comerford sent them to the water break still hoping they could overturn the still sizeable six points lead.

Ten minutes from time Ian Brett, one of Grangemockler’s hardest workers throughout, kicked a deserved point to cut the gap to five, but that was to be as good as it got for Liam Walsh’s side. At this stage Drom were also reduced to 14 men with the black carding of Michael Campion.

Grangemockler huffed and puffed a lot thereafter but were really going nowhere fast against a strong-spined Drom Inch, time and again running into dead ends or forced turnovers. It was the mid side, sensing the finishing line, who were to finish the stronger with three unanswered points at the end.

Podge Campion kicked his second point in the 60th minute to put the lead back to six. And during time added-on David Collins pointed a free before John Campion had the final score on what was a memorable day for Drom/Inch.

As a contest this was a disappointing final, Drom/Inch always in control and once they took that early initiative they were never seriously threatened.

They had all the key players on the day, Robbie Long immense at wing-back and kicking two points to boot. Jamie Moloney at midfield played a big part including his goal, ably assisted by the workrate of his partner John Ryan. David Collins and David Butler in the middle of the attack were on a lot of ball all day, while Jimmy Mullen and Podge Campion took their scores capably.

County man Emmet Moloney led his defence who as a unit did very well to restrict what was up to the final an impressive free-scoring attacking Grangemockler machine, but not this time. A second county final loss in consecutive years will be a bitter pill to swallow for this young Grangemockler/Ballyneale side who arrived at Semple Stadium as favourites to atone last year’s disappointment. This defeat, however, will be another step on the learning curve of a journey that will soon see them as a senior club; their development continues.

Things didn’t really go to plan for them on the day. Sean Daly was desperately unlucky not to goal in the eighth minute which would have given his side a lead they never once enjoyed all day. Had that goal gone in, fortunes might have changed for them.

In defence Ian Brett, Leon Kennedy, Mark O’Meara and Ben Comerford were worked hard throughout by a strong Drom vanguard. The best of their forwards were Jamie Walsh, Manus McFadden, John Lyons and Sean Daly. Overall though Grangemockler will know that as a unit they didn’t hit the heights they are capable of, or need to on the big day. They will be back again, for sure. 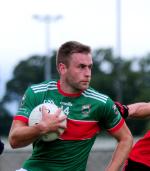