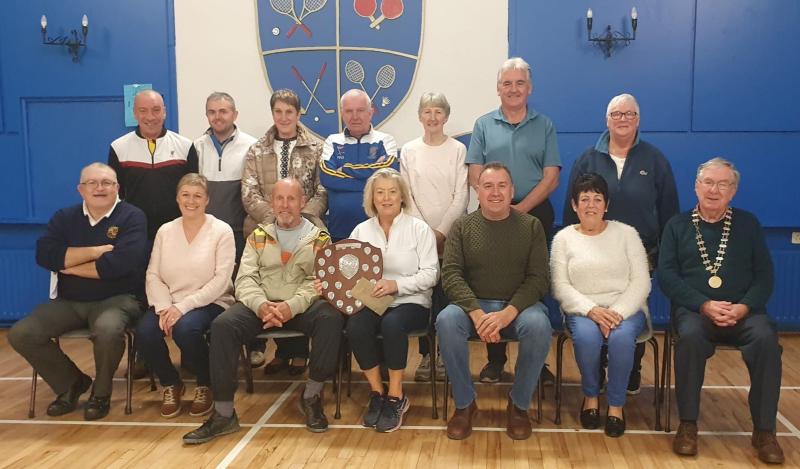 Pictured at the recent presentation of the Paddy Power Shield at Hillview Sports Club, Clonmel were the winners Thomas Kiely and Anne Marie Quigley.

Plenty of action is still ongoing in all the Hillview sports activities, with competitions in pitch and putt, tennis and badminton.

PITCH AND PUTT
In pitch and putt, the Paddy Power Shield, in honour of one of our best -known past presidents, was kindly sponsored by the Power family, keeping his memory in Hillview alive.
The winners of this mixed team scramble event were Thomas Kiely, who is having a great year and all-round sports star Annmaria Quigley, who is usually collecting tennis prizes. This was a very well-supported event and credit to pitch and putt captain John Fitzgerald for presenting a very even draw.
The prizes were presented by Hillview president Seamus O’Doherty.
The nett runners-up were Pat Morris, Ann Wall and John Creed, the gross winners were Stephen O’Reilly, Ollie Connellan and Brother Buck, and the third nett winners were Noel Joyce, Nora Whelan and Seamus Greene.
Just to maintain interest up to mid-December, there is an ongoing competition, running until Sunday, December 12. Play as often as you like, at €2 per card, the best 2 18 hole cards to count.
The committee would like to thank all the members for the great support they gave to ensure good entries in all our competitions.
Hillview Sports Club Christmas Scramble results from Sunday, November 14.
Overall Nett winners: Kyle Kennedy, Mary Lynch and Bill Roberts with 71⅔
Overall Nett runners-up: Tom Morris, Annmaria Quigley and John Creed with 73⅓
Overall Gross winners: Marco Comerford, Gemma Martin and Jeremiah Bergin with 87.
The final competition of the year, the Christmas Hamper, is on this Sunday November 28, entries to Adrian Anglim. The presentation of prizes will be on Sunday after the Christmas Scramble.

TENNIS
The Winter League Doubles started last week and will be played on Monday and Wednesday evenings, with finals on Friday, December 10. This is a great competition to suit all standards and to play with different partners. We are delighted to see so many of our new lady members who graduated from the singles ladder and now participating in a major club competition.