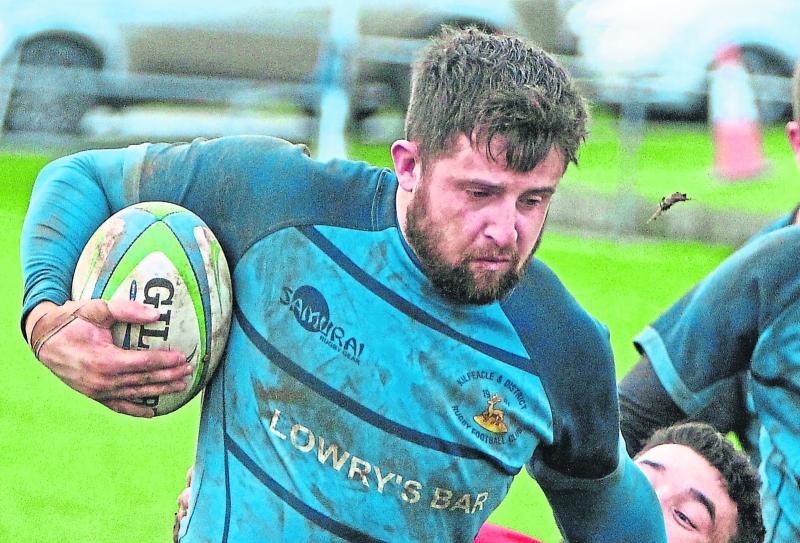 Kilfeacle have now fallen four points behind the lead in Conference A of the Munster Junior League approaching the crucial last round of games, following their 19-24 defeat to Newcastle West at home on Sunday last.
The weather was bitterly cold and the home side had the advantage of a light breeze for the first half. Kilfeacle started the game well and immediately pushed their opponents back into their own 22.
Directly from the kick-off they were awarded a penalty, which William Staunton converted to open the scoring. Two minutes later Newcastle West were awarded a penalty just outside the Kilfeacle 22, which they kicked to level the score.
The first half became a war of attrition between evenly-matched teams. The difference that emerged was that Newcastle West seemed to have come with a game plan to kick for goal at every opportunity, whereas Kilfeacle and District took some of their penalty opportunities to attempt to score tries.
On the 17th minute mark William Staunton kicked another penalty for Kilfeacle to bring the score to 6 points to 3.
In the 25th minute Newcastle West scored a penalty to level the scores. Five minutes later the visitors scored another penalty to move three clear at 9-6.
As the half progressed Kilfeacle pushed further and further into their opponents’ territory and managed to put together some threatening attacks but all the while the cold, wet conditions and a very determined Newcastle West defence meant that their attacks weren’t yielding scores.
Kilfeacle’s pack were coming to terms with their opponents and the conditions and were on top in the scrums.
The forwards consisting of Diarmuid O’Donnell, Simon Barry, Ricky Whitney, Darren Ryan, Conor O’Sullivan, Philip O’Connor, James Ryan, Sean McGrath, Jack McLoughlin, Cormac Ryan, Christopher Farrell and Kevin Kinnane laid the foundations that meant a sustained period of pressure for Kilfeacle.
In the first half the backs Gavin Heuston, William Staunton, Darren Lowry, Evan Breen, Keith Bourke, Kelan O’Connor, James Hogan and Kevin Doyle were restricted in their attacking but excelled in their defensive prowess.
In the last ten minutes of the first half Kilfeacle became more and more anxious to score but were thwarted on every attempt. With 38 minutes played, William Staunton kicked one of the penalties awarded to level the scores yet again at 9-9.
With just seconds remaining in the half Darren Lowry intercepted a pass and burst through the Newcastle West defence and into the 22. He chipped the ball over the cover and watched in despair as the ball bounced agonisingly into touch just before he could reclaim it. The referee sounded the whistle to signal half-time, with the game finely poised at nine points each.
From the restart, the game fell into a similar pattern. In the 46th minute Newcastle West were awarded a penalty 4 metres inside their own half. Their out half decided that with the aid of the breeze it was worth a shot at goal. His belief in his abilities was well founded, as his monstrous kick scraped over the bar to give Newcastle West the lead once more, 12-9.
The next 10 minutes were played in the middle of the field, with neither side gaining the upper hand or having any meaningful scoring opportunities.
In the 58th minute Kilfeacle were reduced to 14 men when a player was deemed to have illegally cleaned out a ruck. The resultant penalty once again saw Newcastle West score 3 points and bring the scoreline to 15-9. It was to be a very expensive 10 minutes for Kilfeacle, as Newcastle West scored two more penalties in the 63rd and 66th minutes. William Staunton kicked a penalty to reduce the deficit in the 67th minute but this was cancelled out by a sublime long-distance drop goal by Newcastle West’s scrum half in the 68th minute.
When Kilfeacle were restored to the full complement of 15, they trailed by 24-12. The game once again became an arm wrestle until the 71st minute, when Newcastle West were reduced to 14 men for a similar offence. Kilfeacle immediately took the game to Newcastle West and gained territorial advantage and within six minutes reduced the deficit with a pushover try scored by Diarmuid O’Donnell and converted by William Staunton.
It was now a one-score game, with Newcastle West leading by 24-19. The remainder of normal time was spent for the majority of the time with Kilfeacle on the offensive, but once again some errors and excellent defending saw Newcastle West hang on.
The final scoreline of 24-19 in favour of the visiting side didn’t reflect how tight a game and absorbing a contest this was.
The team as ever are proud and humbled by the amount of support they receive and hope that their supporters will continue to come along and support the team for their remaining fixtures.

NEWCASTLE WEST ARE BACK AGAIN ON SUNDAY
This weekend’s game sees the same teams pitted against each other at the same venue in the semi-final of the Challenge Cup on Sunday, December 5 at 2.30pm.

One of Ireland's oldest coursing clubs, Knockgraffon CC, had a great weekend