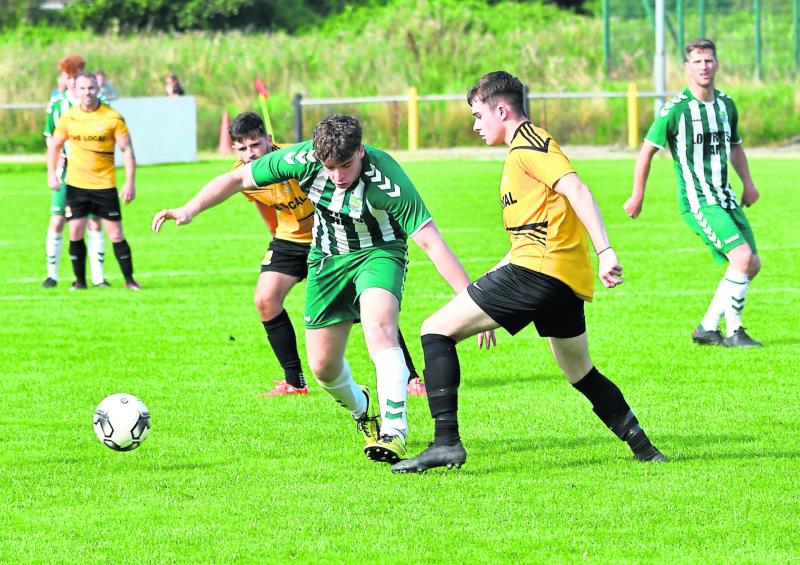 File Photo: St Michael's Rhys Byron was on the mark for St Michael's in their win over Peake Villa in Thurles on Sunday last.

Peake Villa 0 – 4 St Michael’s
All eyes were on the Tower Grounds in Thurles on Sunday as two of the three big beasts of the Premier Division faced off in a highly anticipated game, but by the end of it, the status quo seems to be still firmly in place with a strong performance and comfortable win by current champions St Michael’s over their rivals Peake Villa.
With both teams unbeaten at the half way stage of the season, this result was always going to be important but the home team were hampered from the beginning when they lost their captain and talisman Pippy Carroll at a late stage due to illness. And they found that luck had also deserted them within three minutes when a speculative cross by Edmund O’Dwyer ricocheted off Evan McCormack and ended up in the net to make it one nil to the visitors after only three minutes, the only score of the opening half.
The away side upped the tempo at the beginning of the second period and added to their tally eight minutes in when they forced the hosts defence into another error and a second own goal.
Saints added a third midway through the half when Rhys Byron finished smartly to the bottom corner of the net.
The coup de grace was added 12 minutes from the end when Edmund O’Dwyer capped a fine performance with a well deserved goal with a tap-in from close range after some excellent work around the Villa area bamboozled the home defence.

Glengoole United 3 – 8 Two Mile Borris
Two Mile Borris travelled the short distance to play local rivals Glengoole United in the Premier League and left their neighbours in all kinds of problems at the foot of the Premier League table after a very comprehensive performance and victory.
The visitors were on top from the beginning and the game had barely warmed up before Martin Darmody clinically finished from inside the area, his first of five in a man of the match performance.
But in fairness to the home side the responded well and got themselves back on level terms around quarter of an hour into the game when after a quick counter attack Dan Rafter found Keith Cleere unmarked in the area and he made no mistake.
But that was about as good as it got for Glengoole as Borris went on to dominate from then onwards, retaking their lead with another Darmody goal in the 20th minute. When Urban Nolan extended that to three goals to one on the half hour mark things began to look bad for the home side, but they did rally a second time and Cleere got his second just before the break to send the game in on a score of 3-2 in favour of the visitors at half time.
It was a Darmody masterclass of finishing early in the second period that put the destination of the points here beyond doubt. He completed his hat trick from a delightful free kick and followed it up with another poachers effort to extend the score to five to two by the hour mark.
The final kick from the home side came when Chris Fennelly scored his first goal to bring the deficit back to two. After that and with the home side pushing to try to get something from the tie, the away side simply and ruthlessly picked them off on the break adding three more, through Darmody, Jamie Carey and Tommy Maguire to lift themselves well away from what is becoming a more and more desperate scrap against relegation at the bottom.

All the weekend soccer results from County Tipperary's TS&DL

Cashel Town 2 – 1 Bansha Celtic
Cashel Town came from behind to take three valuable points in Sunday’s game against direct rivals in mid table Bansha Celtic, that should go a long way towards ensuring they will retain their Premier League status come season end.
It was a hard fought win on a bitterly cold day in Bansha but the victory will warm the hearts of everyone involved at the club as it heads for the turn of the year. The home team started the better but good defending by the visitors ensured that clear cut chances were kept to a minimum.
After the initial onslaught Bansha came back into the game, creating some good openings themselves and took the lead in the thirty first minute with a good finish from Eamon Quirke from close range after an excellent cross. It looked like they would take this lead to the break, but almost on the stroke of half time the home team hit back, when they were awarded a penalty that was dispatched to the net by Eoin Byrnes after Callum Meagher was taken down in the area.
The second half was a tight affair with both teams looking for the win, and Celtic came close to retaking the lead when they hit the post with twenty minutes to go. But in the end, it was the home side that managed that vital second goal, right on full time when Jack Fitzpatrick got on the end of a really good ball by Eoin Byrnes and guided it past the onrushing keeper to nestle in the corner of the net.

Clonmel Town 6 – 0 Vee Rovers
Town welcomed Vee Rovers to the Complex in a matchup between top and bottom of the table, with the three points on offer being precious to both sides for differing reasons. On a perfect crisp afternoon for football, it was the home side that made all the early running. In the tenth minute, the visiting keeper made a stunning save from Alan O'Donnell, but the home side opened the scoring from the resulting corner when Keith Cashman glanced home Evan McGuires pin point delivery. Within minutes they doubled their advantage when Mc Guire himself was on the receiving end of another great delivery from Conor o Sullivan to head the ball home. The home side continued to press forward but had to remain vigilant and Eoin Power in the Town goal did well to punch clear from a Vee set piece near the end of the first period. The second half began in a similar fashion to the first with Town laying siege to the Vee goal and when the referee pointed to the spot after a late challenge on Alan O’Donnell, the hosts had the opportunity to end the game as a contest and did so when O’Donnell picked himself up to calmly dispatch the penalty himself, pushing his side into a three-goal lead. Kyle Cuddy and Michael O’Sullivan returning from spells at Cork City and Waterford United entered the fray and within minutes made a big impact with Cuddy firing home a long-range free kick that deceived the keeper for four.
And before their opponents had a chance to recover Conor O’Sullivan added a fifth after Keith Guiry was abruptly hauled down in the box.
After great work from Craig Guiry, the final word went to the returning Kyle Cuddy who deftly chipped the ball over the advancing keeper to make it six and a convincing home win that consolidates Town’s position at the top end of the table heading into the Christmas period.