CJ Kickhams have five points to spare over St Mary's

The Mullinahone team and selectors that defeated St Mary's Clonmel in the south Tipperary U21 A hurling championship final in Páirc na nEalaí, Carrick-on-Suir on Monday

Scoring stats can sum up Monday’s south Tipperary u21 A hurling championship final at a cold but sunny Páirc na nEalaí in Carrick-on-Suir – Mullinahone hit 1-10 from play on their way to a thoroughly deserved victory, St Mary’s managed just 0-3 from play over the hour.
All six starting forwards raised a flag for Mullinahone, as well as midfielder Martin Keogh. The Clonmel side’s only scores from play were two points from Peter McGarry, and one from Conor Deely in the closing seconds of the game.
The scoring disparity suggests it should have been a bigger winning margin for Mullinahone but in truth they looked winners all through, with eight pointed frees from Enda Dunphy keeping St Mary’s within touching distance.
A fine attendance might have expected a better game but some wayward shooting on both sides prevented the tie getting into any flow. However Mullinahone will have no complaints, as they imposed themselves on proceedings from the start.
A brilliant goal from Eoin O’Dwyer in the ninth minute gave them huge impetus and a lead they never surrendered. O’Dwyer had nearly goaled minutes earlier before a scorching run was blocked and he was leading the Clonmel defence a merry dance, but it was Mikey O’Shea who proved the real dynamo in attack for the Kickhams.
He was proving impossible to curtail, creating chances for his forwards as well as chipping in with four great points from play and two from placed balls.
St Mary’s didn’t possess the same threat upfront despite brave displays from Enda Dunphy, Dean Cagney and Peter McGarry, but they came up against a resolute Mullinahone defence in which Conor Whelan and Daire O’Brien were superb – O’Brien overcoming the pain barrier to put in a huge game at full back despite playing with a broken thumb.
Mikey O’Shea began the game as he intended to continue with the opening point in the first minute. Cathal Deely had an early wide for St Mary’s – one of too many missed chances for the side – before Conor Whelan from a free extended Mullinahone’s lead.
Dunphy from a free opened the Clonmel account in the fifth minute and when he tied up the scores from another free three minutes later, the omens were promising for a closer encounter. But that changed when Eoin O’Dwyer was first to catch a dropping ball and he swivelled past the defence to shoot low and hard past Adam Brannigan.
Mullinahone failed to build on that boost and there was a succession of wides on both sides before Peter McGarry narrowed the gap to 1-2 to 0-3 just before the first water break.
However the second quarter proved crucial to the outcome, with Mullinahone hitting five points without reply in a purple patch to get a stranglehold on the final. Martin Keogh started the run with a fine score, followed by O’Shea winning possession on the touchline before cutting inside to split the posts. Patrick Hayes pushed the gap to five points with a great score from a tight angle, before Jack Lonergan got in on the scoring spree. Then four minutes before the break O’Shea was fouled and he pointed the free himself.
St Mary’s had their chances during this dominant Mullinahone spell but failed to take them until Dean Cagney pointed a free to leave it 1-7 to 0-4 at the break. 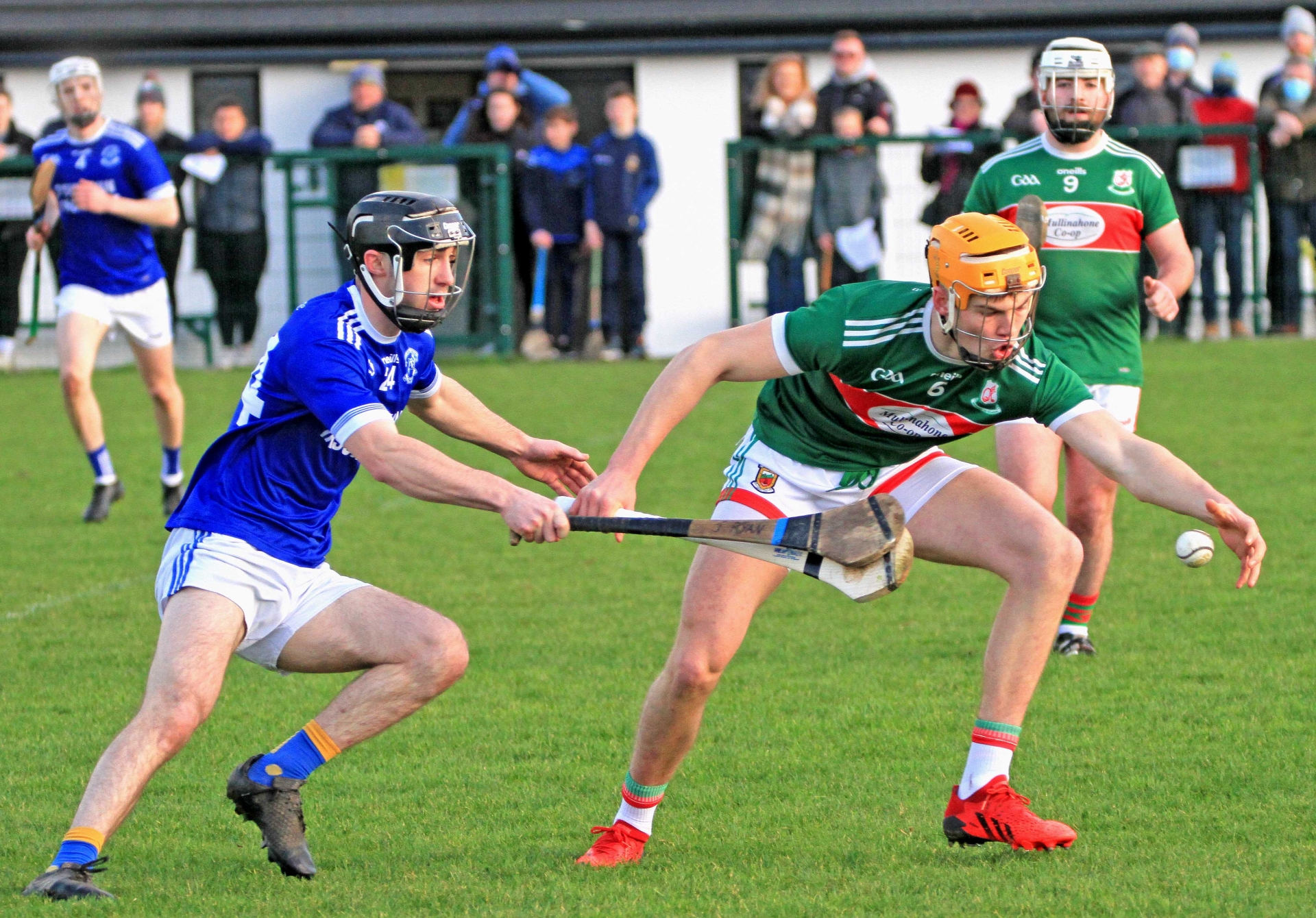 Above: A close exchange during Monday's south U21 A hurling championship final between St Mary's Clonmel and Mullinahone in Carrick-on-Suir

That six points lead fluctuated between five and eight points throughout the second half but St Mary’s could never get it down further to really challenge for the win. Mullinahone started the second half as they had the first and after both O’Shea and Whelan were off target, O’Shea with another super point pushed the lead out to seven.
Dunphy from a free opened the St Mary’s account, but after six minutes Mullinahone had stretched the lead to eight points, 1-10 to 0-5, and a Clonmel revival looked unlikely. O’Shea set up Keogh, whose shot was tipped over by Brannigan and Josh Rowan followed up with a point from a shot over his shoulder. It was proving to be a torrid time for the St Mary’s defence, while at the other end they remained over-dependent on Dunphy’s frees.
By the second water break, the gap was still an imposing six points, 1-12 to 0-9, with Dunphy pointing three frees and McGarry chipping in with one from play, with O’Shea and Whelan from a free replying for Mullinahone.
Shane Morris pushed out the lead again following the water break, with Dunphy replying from another free. Goalkeeper Brannigan then kept some hope alive for St Mary’s when he produced a superb save to deny Martin Keogh a goal. With the game petering out to its inevitable conclusion, Dunphy and O’Shea exchanged points from placed balls, with Conor Deely rounding off the scoring with a late point after the ball broke to him from a 65 lobbed into the goalmouth.
The disparity in scoring threat at either end meant the game never reached the standard expected for a showpiece final. Mullinahone were much better on the day, playing the slicker and more direct hurling and always looking like they had something in reserve. The assembly line producing outstanding hurling talent continues to function in Kickham Country.
St Mary’s will be disappointed with their display, especially following their impressive extra-time semi-final win over Ballingarry. They failed to match Mullinahone’s power and drive and will know only too well themselves that a combination of wayward shooting and lack of firepower upfront contributed to their downfall.
Mullinahone: Stephen Hickey, Cillian White, Daire O’Brien, Sean O’Dwyer, Conor O’Brien, Conor Whelan 0-2 frees; Riain O’Halloran, Oisin Drennan, Martin Keogh 0-2; Patrick Hayes 0-1; Mikey O’Shea 0-6, 2 frees; Shane Morris 0-1; Jack Lonergan 0-1; Josh Rowan 0-1 Eoin O’Dwyer 1-0.
Subs: Diarmuid White for Drennan, Dylan Webster for Lonergan, James Cody for Morris.
St Mary’s: Adam Brannigan, Oisin Power, Eoin McCarthy, Simon Farrell, Josh Kennedy, Tadhg Condon, James Morris, Donal McCabe, Cathal Deely, Conor Deely 0-1; Josh Ryan, Dean Cagney 0-1 free; Peter McGarry 0-2; Ruairi Leahy, Enda Dunphy 0-8 frees.
Subs: Sean Leahy for Kennedy, Shane Ryan for Josh Ryan.
Referee: Paddy Ivors (Ballingarry).