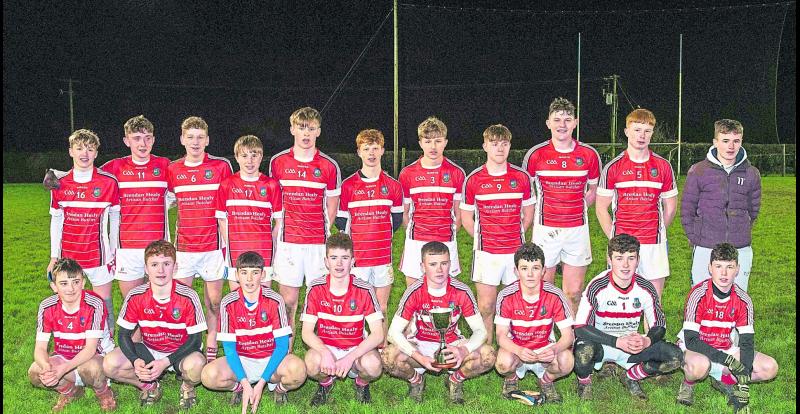 The Galtee Rovers team that won the west Under 17 B football championship and has now reached the county final against Golden Kilfeacle, a match that will be played on Sunday week, January 16

Galtee Rovers were comfortable winners in this much-delayed 2021 county under 17 B football semi-final played in Canon Hayes Park, Bansha on Monday afternoon last.
The home team entered this game as west champions and then enjoyed a five points win over Boherlahan Dualla in the quarter-finals. Cahir, on the other hand, were defeated by Fethard in the south final but rekindled their campaign with a three points win over north champions Moneygall in their quarter-final.
Playing into the breeze, Galtee Rovers raced into an early lead with two points from the influential Eoin Halpin in the opening minute, while Cahir hit a couple of wides at the village end. Gradually, the home side got a grip on the middle of the field through Bill Quirke and Liam Finnane, while Cian O’Dwyer and Eoin Halpin were causing bother for an overworked Cahir defence.
By the 10th minute Galtee Rovers had three further points on the board through Joe O’Callaghan, Daniel O’Dwyer and Bill Quirke, while Cahir responded with points from Tom Delaney and Sean Leahy. As the first water break approached, Eoin Halpin picked off his third point while Tom Delaney replied for Cahir with a pointed free.
The second quarter opened with a point for Eoin Halpin after a foul on Daniel O’Dwyer, but then the home side were reduced to 14 players following a melee around the middle of the field.
Being a man down seemed to galvanise Galtee Rovers to greater efforts and they dominated the remainder of the first half, picking off some fine points while also hitting two goals.
After 20 minutes Daniel O’Dwyer had a bullet of a shot saved by the Cahir defence but Eoin Halpin was there to net the rebound. Not long afterwards, the hard- working Tom Delaney pointed a free for Cahir but Rovers struck for a second green flag shortly afterwards when Joe O’Callaghan was on hand to tap in after Halpin’s shot came back off the crossbar.
As half-time approached, Cahir replied with points from Leahy and Delaney and Galtee goalkeeper Robbie McGrath pulled off a great save to prevent a certain goal, while Eoin Halpin helped himself to the final score of the half, leaving Galtee Rovers in front at half time on a scoreline of 2-9 to 0-6.
The second half opened with both teams trading points through Halpin and Delaney. However a couple of black cards now began to tell against the south team and Galtee Rovers seemed to thrive on the open space, tacking on three further points through Eoin Halpin, while Conal Grogan hit a goal and a point to widen the margin considerably.
To Cahir’s credit they continued to push forward and their efforts were rewarded on 17 minutes when Scott Murphy was on hand to finish to the net after good work by Evin O’Regan.
The final minutes offered Galtee Rovers the chance to empty their bench and now they must turn their thoughts to the final and a renewal of the local rivalry with Golden Kilfeacle, who have defeated the mid and south champions on their way to the decider.

The final will be played in Bansha at 1pm on Sunday week, January 16.