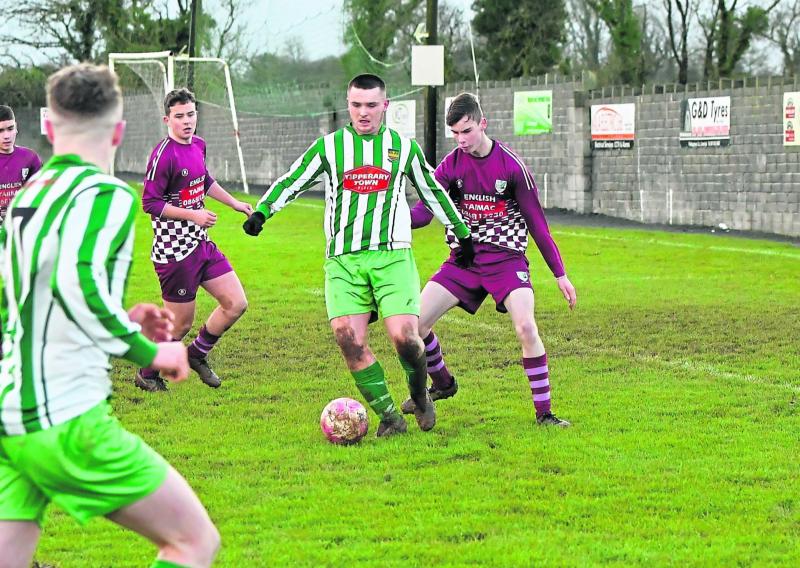 This hugely anticipated game between these two sides took place on Saturday afternoon in Tipperary town, and the entertainment on show didn’t disappoint the supporters, as the away side scored a narrow victory against the league leaders by a single goal in five in the end.
Conditions were not great weather-wise, and torrential rain fell for the first quarter of the game, making it hard for both teams to play at a flow they wanted.
It was clear to see that Galbally came out with all guns blazing, making the better start, and they had two narrowly missed attempts on the home goal inside the first thirteen minutes.
The Saints’ back four relentlessly fought to keep the visitors at bay for the first twenty minutes, and that gave their side the platform to play their way into the tie.
The home side eventually opened the scoring when a Cian O’Dwyer cross to Evan Hawkins saw Hawkins make no mistake from close range.
On the half-hour mark things got better for the home side when Orrin Jones won the ball high up the pitch and beat two defenders to slot home and give the league leaders a two-goal cushion.
But seven minutes from the break, Galbally managed to pull a goal back when Cathal O’Mahony found the net, to send his side to the break only a single goal behind.
This fired the away team up, and they came out sharper in the second period, pummelling the home goal with shots.
But it still took until twenty minutes from time before they managed to get a deserved equaliser that came from the boot of Owen O’Sullivan, who fired home from just inside the area.
The two teams tired after this, no doubt a consequence of the longer than usual winter break, and it looked like it would take a period of extra time to separate them, until five minutes before the end of regulation time, Galbally came up with the winner, courtesy of James O’Sullivan, to the huge joy of the visiting supporters.
Saints desperately tried to find the equaliser to bring the game to extra time, but it wasn’t to be on the day.