Tipperary Rugby: Early promise fades as Clonmel go down at home to Tullamore in AIL 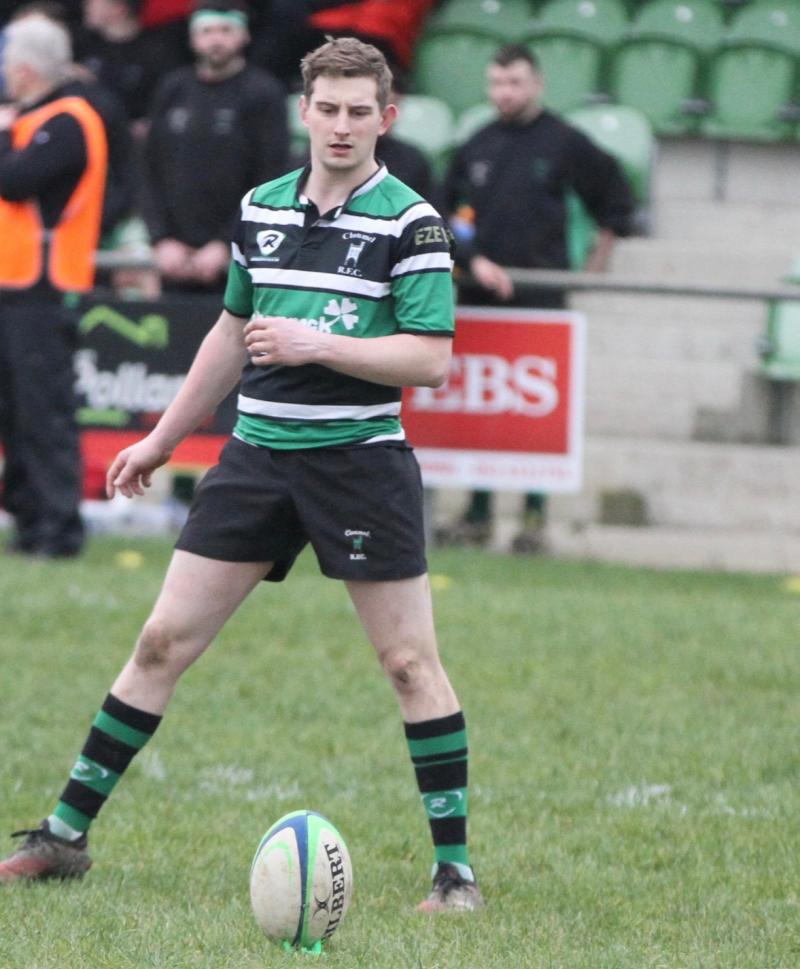 Darren Cass kicked two penalties for Clonmel against Tullamore in the AIL at Ard Gaoithe on Saturday last. Alas it wasn't enough as Tullamore triumphed by 15-6.

The wait for Clonmel’s first win of the 2021/22 All- Ireland League campaign continues following a disappointing 6-15 loss at home to Tullamore RFC on Saturday last in Ard Gaoithe.
It was a good performance in many respects from the home side but unfortunately not enough to eke out that elusive first win.
Conditions were excellent in Clonmel on Saturday and the game was well attended by supporters of both teams. A minute’s silence was observed before the kick-off, acknowledging the recent tragic death of young Tullamore teacher, Ashling Murphy. It was poignant to stand alongside our visitors from Tullamore in the week that Ashling was laid to rest. As a club we send our thoughts and prayers to the Murphy family and the wider Tullamore community. May she rest In peace.
Clonmel started the game in a high gear and dominated much of the opening play, with good possession and territory and they had Tullamore under pressure from the off. Two penalties for Clonmel had the home side very much on the attack within the opening ten minutes and they successfully crossed the line for what looked like the game’s opening try, only for the referee to rule that the ball was held up. A Darren Cass penalty on nine minutes finally got Clonmel on the scoreboard to put the home side into an early 3-0 lead.
Good pressure from the restart and a good Clonmel scrum had them on the attack again, only to concede a turnover to Tullamore, who with a relieving kick escaped from the Clonmel 22.
Tullamore seemed to settle after that, and several deep kicks for territory had them attacking Clonmel for the next ten minutes. The pressure paid off on 24 minutes when the visitors eventually penetrated the Clonmel defence for the game’s opening try and a 3-5 lead for the Offaly side. The conversion was just wide of the mark. A water break followed and both sides took a breather.

The next ten minutes saw lots of attacking rugby by both teams, penalties conceded and a couple of missed kicks for points. On 38 minutes, Clonmel went down a man following a high tackle and a resulting yellow card. Tullamore made the most of the advantage, going over in the corner following a well-executed lineout. The conversion was just wide, and the sides went into the half- time break with Clonmel trailing 3-10.
Clonmel opened the second half strongly and a successful Darren Cass penalty after 44 minutes helped Clonmel narrow the gap to 6-10. However, three minutes later, Tullamore scored their third try to go 6-15 up. The conversion was missed, with the ball coming back off the post.
The next 30 minutes of the game remained scoreless, with both sides playing good attacking and defensive rugby. Clonmel weathered much of the storm deep in their own half and a second yellow had their numbers reduced for a second time. They dug in, however, and Tullamore were kept at bay despite the numerical advantage.
The game concluded with Clonmel on the attack and the closing minutes spent inside the Tullamore 22. However, despite the considerable efforts of Clonmel, no scores ensued. The game finished with Tullamore taking the spoils.

FOCUS NOW IS ON RETAINING SENIOR STATUS
With 11 games played and 7 to go, the focus remains on Clonmel generating enough points to lift the team from the bottom two positions of the table and ensure that senior status is maintained for another year.
In Division 2C Clonmel remain in ninth place, one spot above Sundays Well, with both teams on 9 points. City of Derry are in 8th place on 14 points, with Bruff in 7th on 16th points.
With seven games remaining, it’s all to play for in the coming weeks, as a couple of good results for Clonmel could make all the difference in the tightly- contested bottom half of the table.
HEADING FOR OMAGH
This Saturday, Clonmel travel north to take on fifth- placed Omagh, whose game against Clonmel in November was called off due to Covid restrictions.
That was Omagh’s only recorded draw to date, with five wins and five losses making up their 11 results so far. They will be strong opposition, but we are eagerly awaiting the challenge.
So, spirits are still strong, the mood is good and we wish the lads well on Saturday. Safe travels to our supporters making the long trip north.
Team: Forwards: Niall Campion, Brandon Delicato, Roland Marki, Tony Cantwell, Jack Lonergan, Rob Wynne, John Gallagher, Diarmuid Devaney.
Backs: Alex Sheehan, Gavin Whelan, Conor Pearson, Luke Noonan, Luke Hogan, Greg Carroll, Darren Cass.
Replacements: Billy O’Kelly, James Kehoe, James Corbett, Andrew Daly, Ian Cunningham, Joe Sheehan, Brian O’Dea.