Tipperary soccer is back: Wins for Saints, Clonmel Town, Peake Villa and Glengoole 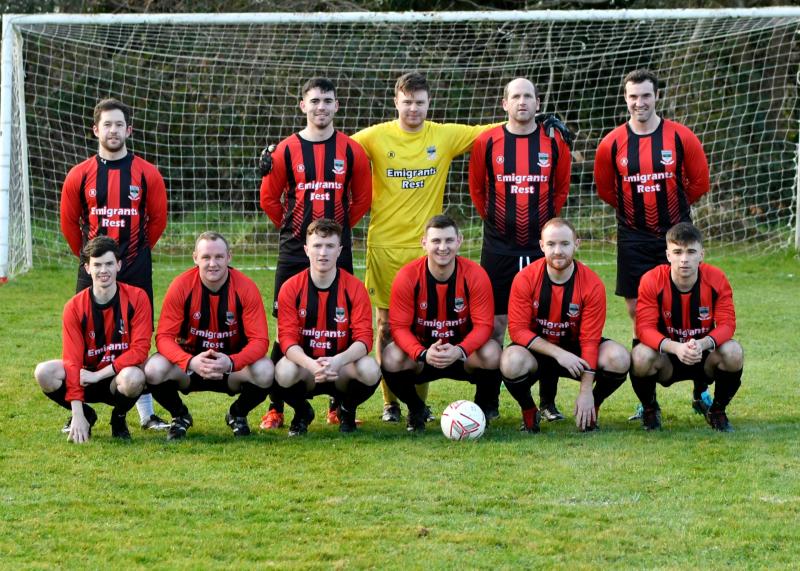 Two Mile Borris 1 – 4 St Michael's
The TSDL resumed after the enforced break caused by the Christmas stoppage and then Covid concerns, but despite the six-week lapse, some things haven’t changed as the current champions continued their relentless push towards another Premier League title.
That said, despite the final score line the home side more than matched their illustrious opponents for long periods of this game.
The first 20 minutes were a very even affair, with the two sides creating chances, the best of which fell to Borris’ Tommy Maguire who fired wide after some good work opened the chance up for him in front of the visitors goal. And that wastefulness was punished just before the hour mark, when the ever clinical Jimmy Carr was first to react to a save by the home keeper and poke the ball home from close range to give his side the lead.
Minutes later the game was held up due to a serious injury for a home player, and this stoppage seemed to distract the home players. They conceded a penalty five minutes before the break which was despatched again by Carr, and almost on the stroke of half time, Adam McGrath made it 3-0 to end the game as a contest.
The second period was a much quieter affair than the first, possibly the effects of the long lay-off, but the visitors cemented their control 18 minutes from time when John O’Dwyer rose highest to head home.
Six minutes later the home side were awarded a penalty and Darren Ivors fired it home to give Borris a goal they deserved, but they never looked like getting much more from this game.

Vee Rovers 1 – 4 Peake Villa
Peake Villa travelled to Scart Park, Clogheen on Sunday afternoon in chase of a victory that would keep them in touch at the top of the Premier League, while they faced a home side desperate to garner some points to alleviate their own dire position at the opposite end.
The Thurles side exploded out of the blocks, opening the scoring in the first minute when a superb cross from Dale Loughnane was headed to the net by Captain Pippy Carroll. Playing with a strong wind at their backs, it looked like the visitors could swamp a sluggish Vee side, but they had to wait until five minutes before the break to add a second against a very resilient home side. But for all their work, they were undone again by a clinical finish from Carroll, who showed his striker’s instinct yet again.
The second half started with the home team trying hard to get back in the game but this was to no avail when Sean Wade scored in a goalmouth scramble after a corner to make it 3-0 midway through the half and assure the Villa the points.
However, the home side were rewarded with a goal with 10 minutes to go when defender Mark Hayde found himself up the pitch to finish a fine footballing move.
But the Thurles side quickly put any hope of a comeback to bed with Carroll completing his hat-trick five minutes from time to finish the game off.

Clonmel Town 3 – 0 Cashel Town
Clonmel Town maintained their pursuit of St Michael's with a vital three points against a stubborn Cashel side at the O’Callaghan Complex on Sunday afternoon. Town made all the early running and Kyle Cuddy and Rhys O’Regan were both denied by point blank Slattery saves early on, before Cuddy eventually opened the scoring with a towering header after a brilliant Craig Guiry cross 11 minutes before the break.
This was how the game went to the break, and the second period began in similar fashion with the home side making the running. The second arrived five minutes in when Craig Guiry spotted the keeper off the line, and he produced an audacious chip which dropped under the crossbar to the delight of the home supporters.
Town wrapped up the points when Slattery again denied the impressive Kyle Cuddy with a fingertip save to push his curling effort onto the crossbar two minutes from the end, only for Jack O’Donnell to head home the loose ball, securing a third goal and all three points.

Glengoole United 2 – 1 Bansha Town
Rough conditions marred the ability to play good football in Glengoole on Sunday morning, but didn’t stop the home side from coming up with a vitally important win against a Bansha side that had been flying prior to the enforced lockdown. The visitors had a strong wind behind them in the first half, and opened the scoring through a Bernard Fitzgerald effort midway through the half. They had a few more opportunities to extend their lead but the home side defended well to see it out to half time only a single goal behind.
Now with the wind behind their backs, the hosts piled on pressure and found a way back into the game, just before the hour mark, when Dan Rafter was brought down inside the box and Stephen Holohan stepped up to score the resulting penalty, levelling the tie.
A very even game throughout it could of went either way, but the home team took the lead with twenty minutes left after Rafter’s diagonal ball to the back post was met by Ian Ivors with a diving header. Fitzgerald almost squared the game up again late on, but his free kick was brilliantly saved by Jimmy Corcoran in the Glengoole nets. The final minutes were frantic but Glengoole held on for three vital points.