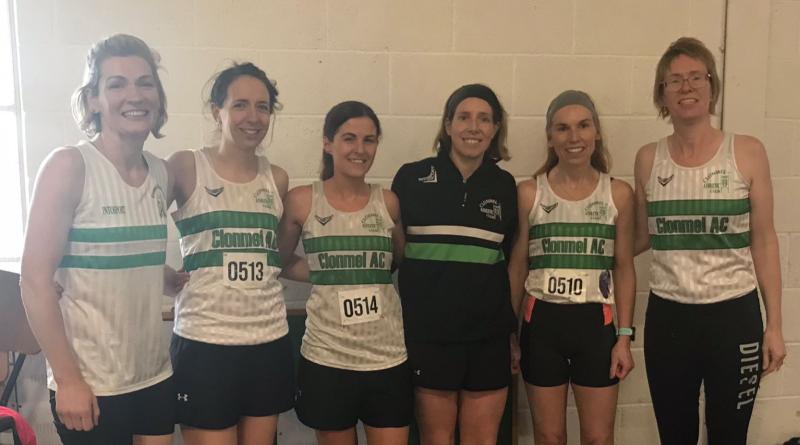 The county road season got underway today in Moyne with the County Novice races down for decision on Sunday last. The conditions were very demanding with athletes having to contend with elements of Storm Franklin like strong headwinds, rain and hailstones as well as plenty of surface flooding on the roads. Still, this did not deter our members as all of them put in brilliant efforts in such trying conditions.

WOMEN'S RACE
In the women’s race we had 10 athletes competing. Right from the start of the 3k race Maire Claire McCarthy went to the front and set a strong tempo as she was determined to go two better than her bronze medal winning performance in last year’s event.
This determination saw her opened a good lead inside the first km. She maintained that strong effort over the rest of the race and was well clear as she entered the track with 300m to go. She came home a very worthy champion when finishing in 11 mins 5 secs, fantastic effort in such conditions.
Then we had a right tussle for the silver medal with Elaine Horgan holding off some late challengers over the closing stages to finish second in 11 mins 47 secs, brilliant effort. Then we had Suzanne Shine also running a brilliant race when finishing fifth in 11 mins 55 secs.
These three athletes combined very well to win the gold medals and retain the cup for another twelve months, thus achieving a four in a row, last achieved by the club in 2006 to 2009 era.
We also had good performances from Aisling English 7th (12:37), Brid Hearne 11th (13:08), Jennifer Quinlan 12th (13:11), Sareen Walsh 13th (13:14), Michelle Doherty 14th (13:19), Marina Quinlan 16th (13:40) and Annmarie Looby 18th (14:03).

Munster road Championships
These Championships races for Novice, Senior and Masters over four miles for both women and Men are on in Quilty County Clare on Sunday, March 6. It is hoped to have two strong squads competing in these two races as all our members are eligible to compete.
The closing date for entries is March 3.