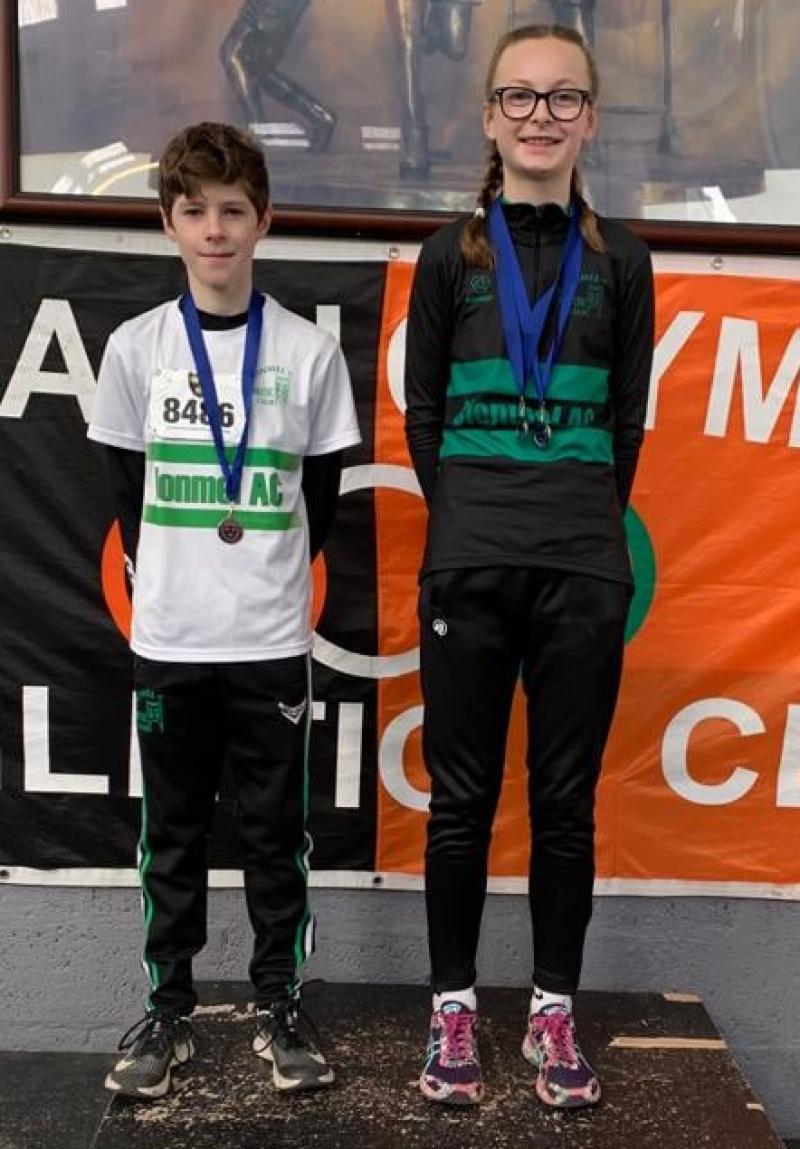 Adam Prout and Cara Ryan who medalled at the Munster Indoors in the High Jump. The championships were held at Nenagh last weekend.

The Munster under 12 to under 19 Indoor Championships took place in Nenagh on Saturday and Sunday last Clonmel AC was represented with some fantastic results.
In the girls under 12 Holly McNamara competed in the 60m dash and ran a great race to make the semi-final. In the boys under 12 Joe O’Brien on his first outing at Munster level ran a great race to place 26th.In the girls under 13 Caroline Smith made the final of the 60m Hurdles and finished a very close 5th. Caroline also ran in 600m and ran a very good race to place 18th in a very big field.
Next was Cara Ryan competing in the Long Jump and with a jump of 4.64m Cara took Munster gold.
In the High Jump, Cara had set her sights on the Munster record of 1.50m and after nine jumps that record fell to a 1.51m Cara then bettered her new record by jumping a 1.54 on her next attempt. Double gold and a Munster record.

Next the under 13 boys were up and we had three competitors in the 600m with Rory Hennessy 15th, Jack Landy 18th and Harry Walsh 20th all putting in great performances. Adam Prout jumped a lifetime best to take the bronze medal in the boys u13 long Jump with a distance of 4.36m. The following day Adam competed in the 60m dash and put in the performance of his life to win the gold medal in a time of 8.35 secs only 0.01sec separating the top 2.
Next up for Clonmel were the 60m under 17 boys and Tadhg Quinn in his first competition ran a great heat to narrowly miss out on a place in the final. Tadhg also ran in the 200m and placed 8th. In the girls under 17 600m Eimear Heafey made the final finishing 6th in a great time of 2 mins 54 secs.
In the under 18 boys 60m Jack Boland ran brilliantly to progress to the final with a time of 7.77 secs for eighth .
Clonmel AC congratulate all the brilliant performances over the weekend and as usual this would not be possible without the continued support of parents and our coaches.
Cara and Adam now progress onto Nationals.