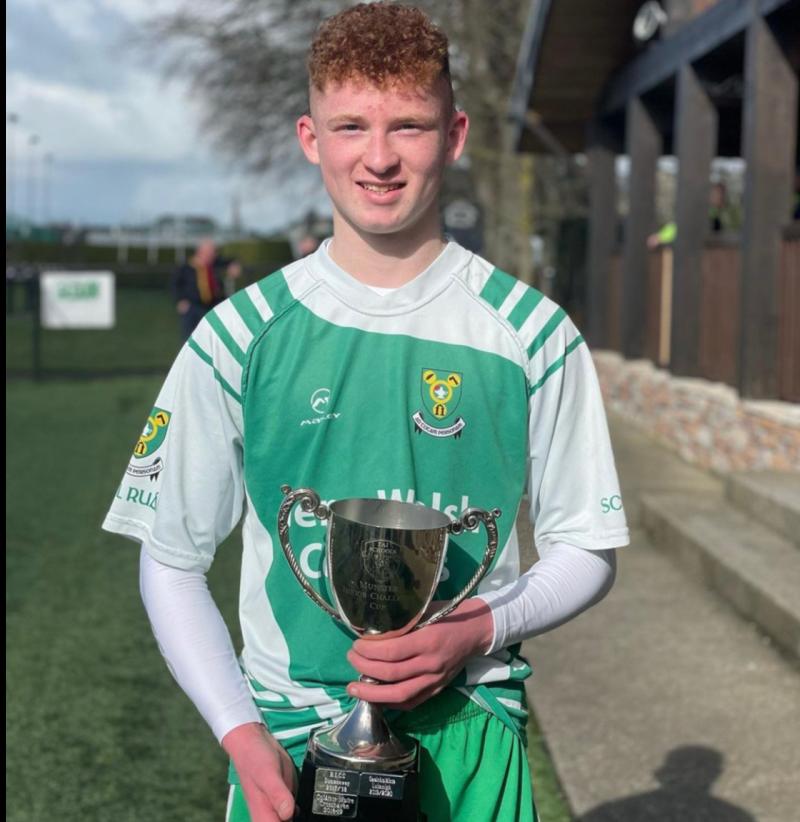 The U17s soccer panel of Scoil Ruain, Killenaule, were recently crowned Munster Challenge Cup champions and have now progressed to the All - Ireland Final following their semi - final victory over Gaelcholaiste Reachrann from, Dublin.
The journey began for the boys back in November when they got off to a positive with victory over Tipperary town rivals St Ailbe’s. Among the scorers on the day were international students Borja Rodriguez with two goals and Hjaite Holland.
The next game saw the team away to Nenagh College in what was a tricky game. Scoil Ruain found themselves one goal down before a wonderful free-kick from Sam Rowan levelled matters before half time. Two excellent second half goals from Alex Greene and Brandon Ryan Webster completed a 3-1 win.
The quarter final saw Charleville CBS make the journey to Killenaule. Charleville were full of confidence from the start but Scoil Ruain gave an exhibition of possession football in the first half and completely dominated the ball. A wonderful free-kick from Luke Ryan gave the team a 1-0 half time lead and it really should have been more. Charleville levelled early in the second half with the aid of a gale force wind and Scoil Ruain needed to dig deep to hang in and they did just that. Brandon Ryan Webster snatched the winner in injury time for a deserving win.
The boys then travelled to Passage West to play St Peter’s in the middle of Storm Dudley. The boys coped with the conditions very well and secured a 4-1 win with goals from Ignacio Rodriguez and a hat trick from Luke Ryan, including another superb free kick. 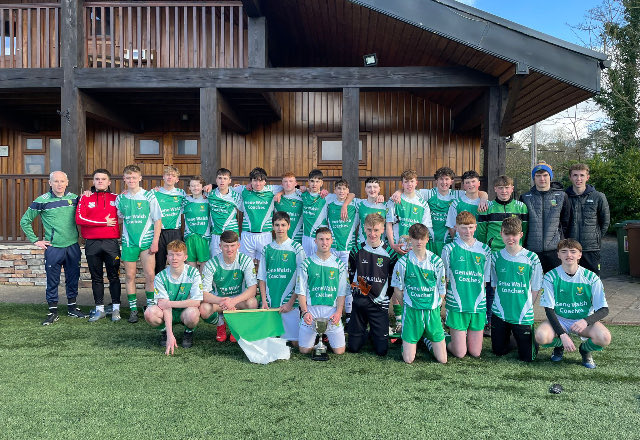 The Scoil Ruáin Killenaule under 17 panel with mentors

The Munster Final against Scariff CC was played in glorious spring conditions on the astroturf surface at Cahir Park FC on Thursday March 3. Another dominant first half display saw the boys lead 1-0 at half time courtesy of a goal from Borja Rodriguez. Scarriff piled on the pressure in the second half but they came up against goalkeeper Adam O’Connell in inspired form and a resolute back four of Darragh Linnane, Finn Nolan, Cillian O’Halloran and Matthew Direen. The boys held on for a deserved win, and their first Munster soccer title.
The following Thursday the boys travelled to Killeshin AFC, in Laois, for an All-Ireland semi final against Gaelcholáiste Reachrann from Donaghmeade, Dublin. The boys anticipated a Dublin team to be stiff opposition, but yet again after a dominant first half Scoil Ruain led 2-0, with goals from Luke Ryan and Borja Rodriguez. The Dublin side got one goal back with 20 minutes remaining, and again, the boys needed to dig deep to hold on. They did hold on thanks to an excellent squad effort and the stubbornness of Adam in goal, and the back four. In midfield Fionn Fitzgerald was a significant presence throughout, and the front three of Ignacio Rodriguez, Alex Greene and Brandon Ryan Webster worked tirelessly and all three were unlucky not to get on the scoresheet.

The boys can now look forward to an All Ireland final on Thursday, March 24 against Coola from Co. Sligo. The venue is Athlone Town AFC stadium at 1pm.
Their manager, and teacher to some, Cian Corcoran is immensely proud of all their efforts from 1 to 22. Thirty-six students turned up to the first training session in early September but unfortunately the squad had to be cut to a more manageable number. The attitude of the boys and their approach to training has ensured that whatever starting 11 lines out has earned their place. The squad also appreciates the work done behind the scenes by 6th year students Andrew Corbett, Diarmuid White, Che Delaney Scott, former student Matthew McCormack, Clonmel Town goalkeeping coach Stephen O’Neill, and the support and encouragement of the Scoil Ruain management and staff.
Scoil Ruáin abú.