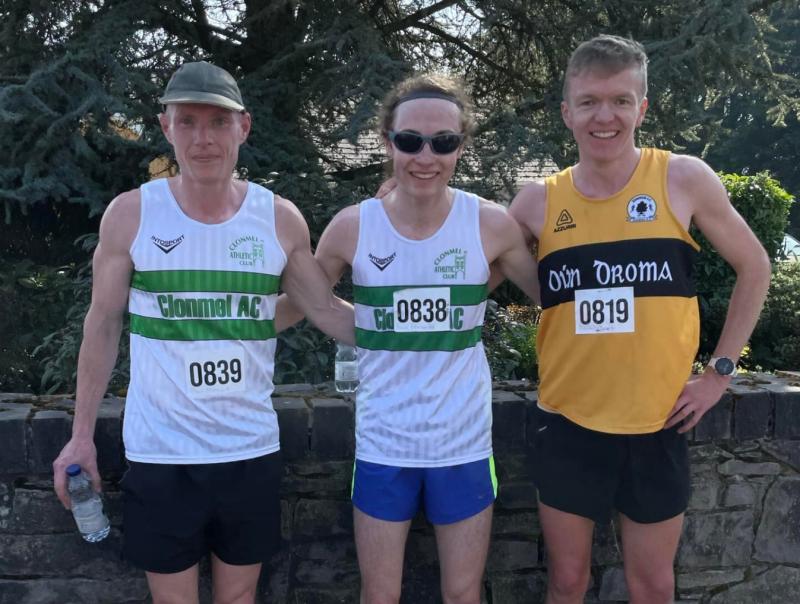 SENIOR MEN’S RACE
The men’s race over two laps was fast from the start as the early leaders Evan Fitzgerald of Clonmel and Kevin Moore of Dundrum set a strong pace that soon saw them going clear of the chasing pack inside the 1km.
As they came back into view Kevin was leading with Evan on his shoulder as they went through 5k in 15:40. They were still together as they left the village on the final lap. Then with about a mile to go both athletes were testing one another with surges but to no avail. With about 600m to go Evan put in a sustained effort and slowly opened a lead on Kevin but there was still very little between them with 200m to go. Try as he did Kevin could not get back on level terms with Even winning close to the finishing line in 31 mins 19 secs with Kevin 3 secs adrift with Evan crowned County Senior Champion.
Evan’s father, John won the first of his seven County Senior 10k titles in 1982, forty years ago while he was second in the other five Senior 10k Championships, the apple does not fall, etc……
Tthe bronze medal was settled inside the first 5k as Paul Minogue of Clonmel went clear of the chasing pack on the fist lap and maintained that strong effort all the way to finish 3rd in 32 mins 29 secs.
In the Club event Clonmel were crowned County Senior Champions with their team of Evan, Paul, Conor Fleming 11th in 36:47 and Dermot Logue 13th in 37:25, thus winning back the Cup last won in 2016, also in Dundrum.
The Dundrum team of Kevin, Martin Keane 9th in 35:31, Eamon Morrissey 10th in 36:34 and Michael Ryan 22nd in 40:10 won the silver medals.
The Mooreabbey Milers team of Ben, Thomas Mulcahy 12th in 37:06, Willie O Donoghue 15th in 37:47 and Damien Holian 21st in 40:02.
The Clonmel team of Eelco Beckers, Mark Kehir and Michael McNamara won the gold medals in the B Section. The Mooreabbey Milers team of Gerard Hanley, Jason Collins and Dariusz Gazdowicz won the silver medals. The Dundrum team of Ruaidhri Devitt, Jim Halley and Paudie Coen won the bronze medals.
The County Chairman, Owen Fanning, thanks all the Clubs for supporting these Championships, he also thanks Dundrum for promoting two very good events.