Tipperary Rugby: Home and away games with Derry to decide Clonmel’s AIL fate 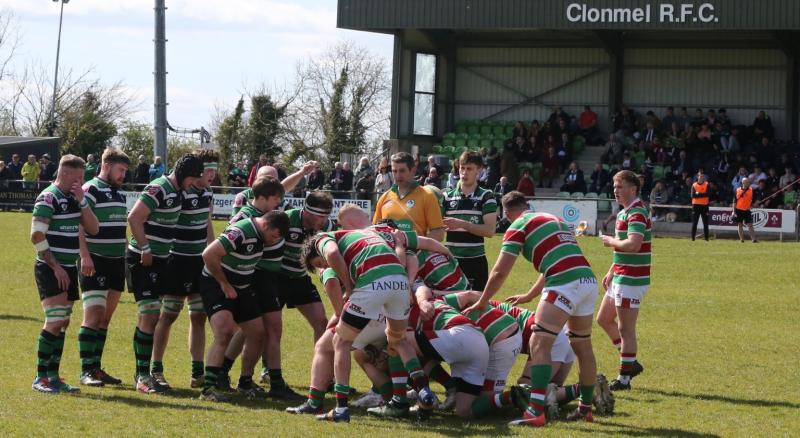 Clonmel get ready to scrum with Sundays Well at Ard Gaoithe on Saturday last in the AIL Division 2C game which the Cork side won by 25-24. Pic: Paul Condon

On March 26 we went down 24-25 at home to Bruff, a one-point margin on the field, a three-point difference in the table. It was a difficult defeat.
Last Saturday, in our last game of the 18 round league, it was a case of déjà vu, with another 24-25 defeat at home, this tme to Sundays Well of Cork. Equally difficult, equally frustrating. Small margins determine outcomes and this season was all about small margins, many of them not going our way.
Going into the tie, Clonmel were confirmed as finishing in 10th place in the league, that wasn’t going to change. We were heading to the play-offs to fight for our chance to stay senior and continue to play senior rugby in the AIL for another season. What wasn’t clear before the game was the opposition in the play-offs. City of Derry and Sundays Well were the contenders in ninth and eighth places respectively. A win for Sundays Well and they were secure. A win for Clonmel with a win for Derry, who were at home to Tullamore, and Derry were in the clear.
At stake for Clonmel was pride in the jersey, a hunger to win at home and a strong desire to end this part of the campaign on a high. All were in evidence in abundance and while we didn’t pull it off, no one questioned the commitment and hunger of the lads as the full-time score, yet again, reflected the closeness of the encounter.
By 4.15pm, all was clear. Sundays Well were secure and despite a strong City of Derry 49-28 win over Tullamore, Derry finished in ninth place and will meet us twice again in a home and away relegation play-off to determine the final outcome of Division 2C.
Saturday was a glorious day, by Ard Gaoithe standards in April. A huge crowd turned up to cheer on both sides, and there was a real sense of anticipation and occasion in the air. The visitors got off to the stronger start, piling on the pressure from the outset. That pressure paid off and Sundays Well opened the scoring with a try in the corner after several phases close to the line. The conversion was wide of the mark and the Cork side were up and running at 5-0 within the opening ten minutes.
However, Clonmel upped the ante big time and came really close to scoring on 11 minutes when JJ McIlwraith crossed the line, only to have the ball judged to be held up. On 21 minutes a break by Niall Campion and a superb offload to captain Luke Noonan set Noonan up for a run down the right wing to the line, touching down in the corner for Clonmel’s opening try. The conversion was just wide, and the sides were level 5-5. Ten minutes later a great run from Luke Hogan saw him go in under the posts for Clonmel’s second try, with the conversion ably dispatched by Darren Cass. Clonmel led 12-5.
A Sundays Well penalty brought the game to 12-8 before Hogan and Cass combined once again to add seven more points for Clonmel to end the half 19-8.
Sundays Well opened the second half with a converted try to narrow the gap to 19-15 before Luke Hogan made a sensational break to score his hat-trick and increase the lead to 24-15.

Tipperary Rugby: Cashel run in six tries but still go down to Buccaneers in AIL

Sundays Well responded, with a maul under the posts and resulting try and conversion to bring it back to a two-point game at 24-22. The clock seemed to tick on for ages past the 80-minute mark when a late penalty deep in added time gave the visitors the opportunity to steal the game at the very end. They did just that and agonisingly notched up another three points to close it out.
We now draw a line under the campaign to date and prepare ourselves for two games against City of Derry, to determine our fate for 2022/23. We’re at home on April 23 and away on April 30. A campaign that started back in October comes down to a final 160 minutes of rugby. All to play for yet again!
Team: Forwards: Niall Campion, Rob Wynne, Billy O’Kelly, Jack Lonergan, Tony Cantwell, Diarmuid Devaney, John Gallagher, JJ McIlwrath. Backs: Aiden Hickey, Luke Noonan, Conor Pearson, Andrew Daly, Luke Hogan, Greg Carroll, Darren Cass. Replacements: Brandon Delicato, DJ Brannock, James Corbett, Gavin Whelan, Mikey Lonergan.