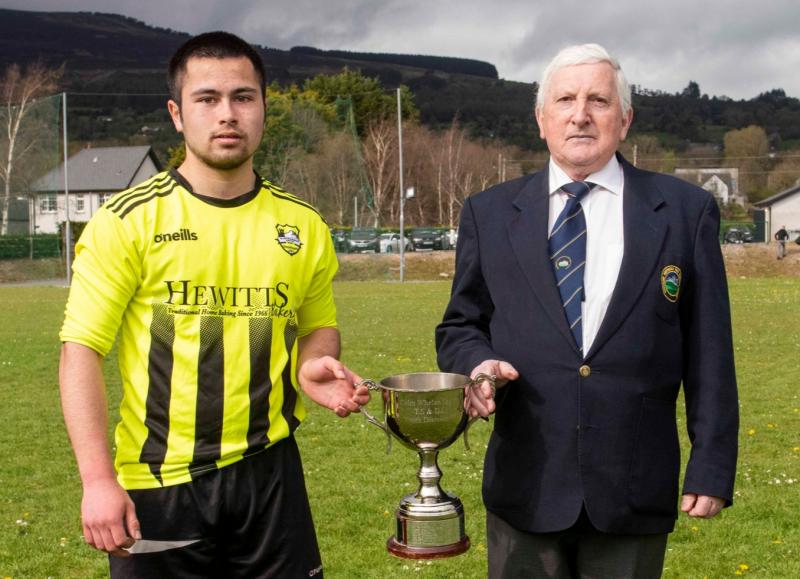 Slievenamon Celtic 4 – 0 Cahir Park
All roads led to Ballypatrick on Saturday when the hosts Slievenamon Celtic took on Cahir Park, knowing that a draw or victory would secure the Second Division title for them in their first season at this grade.
The fear was that nerves and the occasion might get to the home team, but from the off it was clear they meant business and settled down to the task at hand.
In the 10th minute Joseph Cummins, who would cause problems for the visiting defence throughout, raided down the left wing and drove a low cross to the front post, where Aaron Costin arrived from midfield to perfectly volley to the bottom corner to give the home side the perfect start.
Not content to sit back on their lead, the hosts pushed forward and shortly after Jack McDonnell beat his man on the right and crossed for Cian Phelan to shoot goalward. The initial shot was saved but the ball dropped back to the feet of Phelan, and he made no mistake with his second effort and doubled his side’s lead.
Celtic were now in full flow and shortly after the restart Eoin Condon latched onto a loose ball 35 yards from the Park goal and sent an audacious lob back over the stranded ‘keeper to put the home side in a commanding 3-0 lead at the break.
Turning into the second half, it was now about keeping a clean sheet for the home team and despite the hard work of Kyle Delaney in midfield and Evan O’Regan up front for Cahir, the hosts’ defence stood firm throughout.
With just minutes remaining Eoin Condon broke onto a through ball to slot into the bottom corner and put the icing on the cake for a 4-0 win, and the final whistle sparked great celebrations for the home team’s players and supporters, capping a fantastic year for the club, which won a league and cup double in some style.

Galbally United 3 – 1 Clonmel Town
Galbally United stayed in the hunt for the Youths Division One title with another win on Saturday against a good Clonmel Town side. Galbally have been performing heroics this season with their run in cup competitions, but they will have one eye on upsetting the odds this weekend against pre-season favourites Peake Villa, as the title comes down to the wire.
This game was close throughout, with chances at a premium, and it was the home side who opened the scoring just before the half- hour mark with an effort by Paddy Kennedy.
This was the only goal of the first half, and Galbally looked to have secured the points when Cathal O’Mahoney doubled his side’s lead in the 58th minute. They added a third three minutes later when Owen O’Sullivan found the net, but Town never gave up and pulled a goal back through John Buckley 20 minutes from time.
But that was all they were going to get from a home side who were in no mood to let the visitors back into the game, and Galbally closed the tie out with a very comfortable defensive performance.