Damage was done in the first half at FBD Semple Stadium 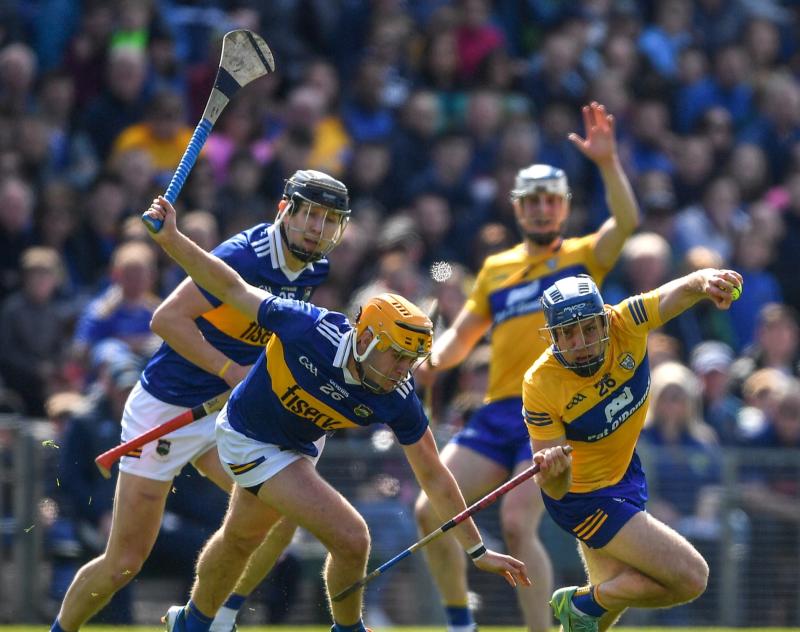 They may have succeeded in salvaging some small element of respectability from the second half after a disastrous, awful display in the opening period but the stark reality is that Tipperary's hopes of qualifying for the All-Ireland hurling championship's knockout stages, let alone reach the Munster final, are hanging by a slender thread after this latest reverse.
Their supporters were hoping that they would have benefitted from some sort of a bounce after an encouraging display, albeit in defeat, against Waterford the previous week. However, those hopes were crushed after an insipid display against Clare at FBD Semple Stadium this afternoon that was simply nowhere near good enough in a championship that affords precious little margin for error.
Their first half performance must rank as the worst witnessed from a Tipp team in the championship for some time. They were 13 points in arrears at the break (3-11 to 0-7), and even at that stage were performing so poorly that there was little prospect of a recovery.
They got the best possible start to the second period when Ger Browne gained possession around halfway and made a beeline for the Clare goal before unleashing a piledriver to the net.
They took confidence from the score and were on the front foot again shortly afterwards, pressing for another goal. But this time Mark Kehoe's ground shot from close range trickled wide, as Clare kept the scoreboard ticking over with points from Peter Duggan and Tony Kelly's free.
However, with 21 minutes of normal time remaining they had the gap down to nine points when they were gifted a goal, Barry Heffernan's speculative lob from the centre of the pitch dropping into the net.
Seven points separated the sides with eight minutes of normal time remaining when Jason Forde converted another free. That was as close as they came, though, on an afternoon to forget from the home team.
Mark Kehoe had a low shot blocked by Clare goalie Eibhear Qulligan at the expense of a 65 but three Clare points from Robyn Mounsey, David McInerny and Ryan Taylor soon steadied the ship, and from there they had a comfortable run to the finish line.
Not surprisingly, good performances were few and far between for Tipperary. Ger Browne, who replaced the injured John McGrath in the 23rd minute, offered some badly-needed thrust to a forward division that otherwise lacked penetration on an afternoon when Noel McGrath, Michael Breen, Mark Kehoe, Jake Morris and Jason Forde (apart from placed balls) never made much of an impression.
Cathal Barrett and Ronan Maher occasionally did well in a defence that was all at sea on too many occasions in the first half, with Craig Morgan coming into the game in an improved defensive performance in the second period. Half-time substitute Conor Stakelum also provided the team with a lift.
Untold damage, however, was done to Tipperary's prospects in the opening half. From the throw-in Clare produced a much more measured and coherent display and performed with a gameplan, something that seemed totally absent from Tipp's performance.
As soon as the game began, Tipperary were in trouble on a day when they had the opposite of the Midas touch, whatever that is.

Clare started smartly with points from Tony Kelly's free, Ian Galvin and another Kelly free, with Jason Forde's early 65 cancelling Kelly's early point.
That followed an incident when Forde had a sight of goal, after Mark Kehoe had supplied the pass, but he couldn't get his shot away.
Clare struck their opening goal in the eighth minute when Tipp goalie Brian Hogan produced a fine save to deny Peter Duggan, but Ian Galvin had the simple task of diverting the rebound to the net (1-3 to 0-1).
Tipp had started slowly for the second consecutive game. But unlike their opening tie against Waterford the previous week, they remained in a rut this time, never once suggesting that they might even go close to actually winning.
They had another glimpse at goal in the 12th minute when Jason Forde's low shot was saved by Clare goalie Eibhear Qulligan, after Michael Breen's shot had struck the post.
Clare were ahead by four points when they breached the Tipp rearguard for their second goal in the 20th minute. Shane O'Donnell and John Conlon worked a clever exchange of passes out on the sideline near halfway, but it was all too easy as Conlon marched unchallenged towards the goal and unleashed a shot that Brian Hogan could only parry into the air; with no covering defender anywhere near him, Peter Duggan had the freedom of Semple Stadium to bat the ball into an unguarded net.
As the half progressed, Tipp slipped deeper into trouble all over the pitch. The forwards weren't winning enough ball and needed to assert themselves more, midfield was largely anonymous while the backs were at sixes and sevens.
Behind by eight points, what was unfolding in front of the attendance of 17,260 didn't make a pretty picture for Tipperary. However, they still managed to go from bad to worse. The wides continued to mount (they hit seven to Clare's three by the 26th minute), while John McGrath and James Quigley had departed injured by the 27th minute. When Jake Morris fouled the ball when in a decent enough position to take a shot at goal, it seemed to encapsulate Tipp's miserable afternoon.
However, they slipped even deeper into the mire, and another collective groan was soon being raised by the supporters as Tony Kelly drove a penalty high into the net in the 28th minute, after Brian McGrath was judged to have fouled Peter Duggan.
Tipp had now shipped 2-2 without reply and were 11 points behind, having scored just four points in 28 minutes.
In the closing exchanges of the first half they fell even further into the red, meaning that the second half was already shaping up to be an exercise in damage-limitation.
Tipperary: Brian Hogan, Cathal Barrett (0-1), James Quigley, Craig Morgan, Dillon Quirke, Ronan Maher (captain (0-2, 1 free), Seamus Kennedy, Dan McCormack, Barry Heffernan (1-0), Jason Forde (0-7, 4 frees, 2 '65s, 1 sideline), Noel McGrath (0-1), Michael Breen (0-1), Jake Morris, Mark Kehoe (0-1), John McGrath.
Substitutes: Ger Browne (1-3) for John McGrath (23 minutes), Brian McGrath for James Quigley (27 minutes), Conor Stakelum for Dan McCormack (half-time), Gearoid O'Connor for Jake Morris (50 minutes), Alan Flynn for Barry Heffernan (65 minutes).
Clare: Eibhear Quilligan, Rory Hayes (0-1), Conor Cleary, Paul Flanagan, Diarmuid Ryan (0-1), John Conlon, David McInerny (0-1), Shane O'Donnell (0-2), Cathal Malone, Ryan Taylor (0-2), Tony Kelly (captain 1-7, 0-5 frees, 1-0 penalty), David Fitzgerald (0-1), Peter Duggan (1-2), Robyn Mounsey (0-2), Ian Galvin (1-2).
Substitutes: Patrick Crotty for Ian Galvin (49 minutes), Domhnall McMahon for David Fitzgerald (62 minutes), Shane Golden for Cathal Malone (70 minutes), Jason McCarthy for Shane O'Donnell (71 minutes), Jack Browne for Ryan Taylor (72 minutes).
Referee: James Owens (Wexford).