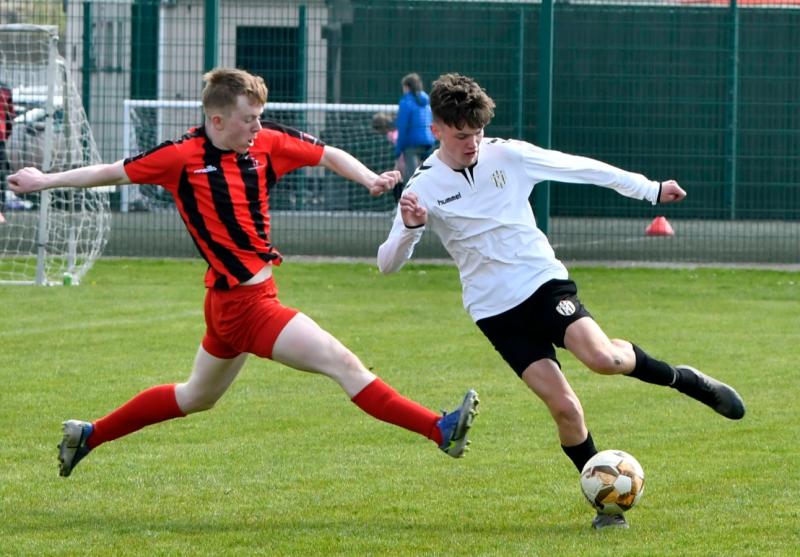 Tom McCutcheon (Peake Villa) arrives to try and get a block on James O’Sullivan in the Youths League game played at the Tower Field in Thurles last Saturday. Pic: Michael Boland

Galbally United 1 – 2 Cashel Town
Cashel Town travelled to Galbally on Sunday morning and upset the odds to earn themselves a place in the Second Division Shield semi finals with a 2-1 win over the home side.
There wasn’t much between the sides in the opening exchanges, but the visitors eventually opened the scoring in the 28th minute when Kyle Ryan cheekily lifted the ball over the goalkeeper after a pass was threaded through to him.
This looked like giving the visitors the lead at the break. But right on the stroke of half- time Jordan Dineen was fouled in the area, and he stood up to despatch the resultant spot kick to the net and level the game. It settled into a dour midfield battle after that, with chances at the premium, and both sides were probably contemplating extra-time when Ryan popped up to get his and Cashel’s second nine minutes from the end to give them the victory.

Clonmel Celtic 3 – 0 Mullinahone
Clonmel Celtic’s seconds continued their recent good form with a fine three-goal victory against Mullinahone on Sunday afternoon. With both these sides also battling it out for the second promotion spot in the division, there was an element of shadow boxing about the early exchanges. But once they got their teeth into the game the home side hit two quickfire goals through Shane Mullan and Damon Gregory to put themselves in control of the tie.
They added a third midway through the half when Dean McLoughlin pounced on some loose defending to give themselves a very strong lead at the break.
But the visitors had a real go in the second half and came close to working their way back into the game with a fine free that struck the crossbar ten minutes in. After that, the second half was all about game management by the home side and they did that well and were good value for their win.

Clonmel Town 2 – 1 Rosegreen Rangers
Division Two champions Clonmel Town are looking to add the Shield title to their league success and they reached the semi-finals with a two goals to one victory over Rosegreen on Sunday afternoon.
Town dominated from the off but weren’t making clear cut chances, thanks to a stubborn Rosegreen defence. They looked to have finally got the perfect opportunity to open the scoring two minutes before the break when they were awarded a penalty but Paul Shanahan’s effort was saved by the Rosegreen goalie, and that was enough to see it level going in at half- time.
Town brought in Keenan Kerton at the beginning of the second period, and within just fifteen seconds of the restart he unleashed an unstoppable shot from 25 yards out that flew straight into the top corner of the net to open the scoring.
Now in the ascendency, the home side were unlucky not to find themselves a couple more goals ahead but for some excellent goalkeeping in the away team’s goal. But they finally doubled their advantage when a piledriver from Michael O’Sullivan took a slight deflection and left the unlucky ‘keeper stranded.
The game started to change, however, with ten minutes left and the hosts seemed to get complacent. This gave great energy to the visitors and they cut the deficit in half when a corner wasn’t dealt with and Gavin Ryan was on hand to excellently head the ball home.
Rosegreen really grew in confidence after that and should have equalised but for some heroic defending by the home side. But in the end, Town held out and will be happy to have gotten over this scare to continue their chase for more honours.

St Nicholas 6 – 0 Kilsheelan United
Having beaten the same opposition to stay up in Division Two a number of weeks ago, St Nicholas once again welcomed Kilsheelan United to Danny O’Dwyer Park to inflict more pain on them, as they coasted into the semi-finals of this year’s Shield competition.
The opening 20 minutes were tight, with both sides having a number of half- chances. However, once the home side got themselves in front in the 23rd minute courtesy of an Aaron Ryan goal, there was only going to be one winner in this game. Eoin O’Riordan has been finding the net on a regular basis throughout the season, so it was no surprise when he added a second just before the half-hour mark.
And Ryan rounded off the first half scoring when he got his second ten minutes before the break to send his side in three goals to the good.
Whatever hope Kilsheelan may have harboured of getting back into the tie in the second half was snuffed out within five minutes of the restart when Jason Sutton added a fourth goal for the Saints.
And a brace of goals in the final quarter of an hour scored by Michael Maguire really put a gloss on the scoreline to give his side confidence in the semi finals.