Tipperary captain Conor Sweeney in action against Waterford during this year's Division 4 league game played at Fraher Field in January. That day the sides drew 0-10 piece.

The Munster senior football championship for 2022 kicks off on Saturday evening with two quarter-final games down for decision. Clare and Limerick will get first run at 6 pm in Cusack Park, Ennis, while at 7 o’clock Tipperary and Waterford do battle in Dungarvan. The winners of both games go forward to meet in a semi-final on May 14; Cork and Kerry will contest the other semi-final.
While the All-Ireland football championship, like the daffodils of spring, is perennial, this year’s version will be somewhat different.
The Sam Maguire Cup, despite some twists and tweaks along the way, has by and large remained the preserve of the few, with only six counties having won the title in the last 20 years - exactly the same number as in hurling. Resultantly, at long last, a second serious competition, the Tailteann Cup, has been introduced, in the main to give the so-called lesser counties a chance to realistically compete for summer silverware.
Modifications have been taking place with the football championship since 2001 when qualifiers were first introduced, followed later by the Super 8s for a period. However, for most counties, most years, their lifespan had as short a spring as the aforementioned daffodils; championship aspirations hastened away long before the summer had attained its highest noon.
For both Tipperary and Waterford for now, the focus will be on an opening day victory and a crack at either Clare or Limerick. A semi-final win would not alone secure a provincial final place but would also guarantee a place in the Sam Maguire Cup competition proper for the victors. Failure to reach the Munster decider will automatically lead to the Tailteann Cup for both Tipp and Waterford.
With all that clarified, attention now turns to the football itself, with Saturday’s adversaries meeting in a repeat of their Division 4 league opener at the same venue on the last Sunday of January. On that occasion Tipp rode their luck somewhat and were lucky to escape with a share of the spoils, 0-10 apiece.
However, before the seven-game league programme had concluded at the end of March, Tipperary had amassed 11 points, recording five wins along the way. On the other hand, the point gained by Waterford against their near neighbours on January 30 was to be the only point the Deise managed throughout their campaign.
At first glance then it would appear that Tipperary have kicked on exponentially since that league opener, but on closer inspection the league table appears unkind to Waterford. In three of their league games they went under by a single point, away to London, away to Wexford and at home against Sligo when 11-man (yes 11) Waterford lost out in a fiery encounter in their penultimate league game.
It is a very tired football cliché that “Fraher Field is a hard place to win,” but for Tipperary it remains that each and every time they visit. While most other counties manage to get their business done in Dungarvan, the sight of the blue and gold jersey and the natural embedded rivalry of a local derby ramps up the determination of the predominantly west Waterford players a couple of extra notches. Local derby games always have a life of their own.
Tipperary have failed to beat Waterford in their last four league meetings and have to go back to 2008 for their last league win in Fraher Field. Tipp’s record in the championship against their rivals is somewhat better with comprehensive wins in 2015, 2016 and by 0-20 to 0-9 when they last met in 2018. David Power’s side will be hoping that their summertime superiority can continue, but, of course, nothing will be taken for granted. 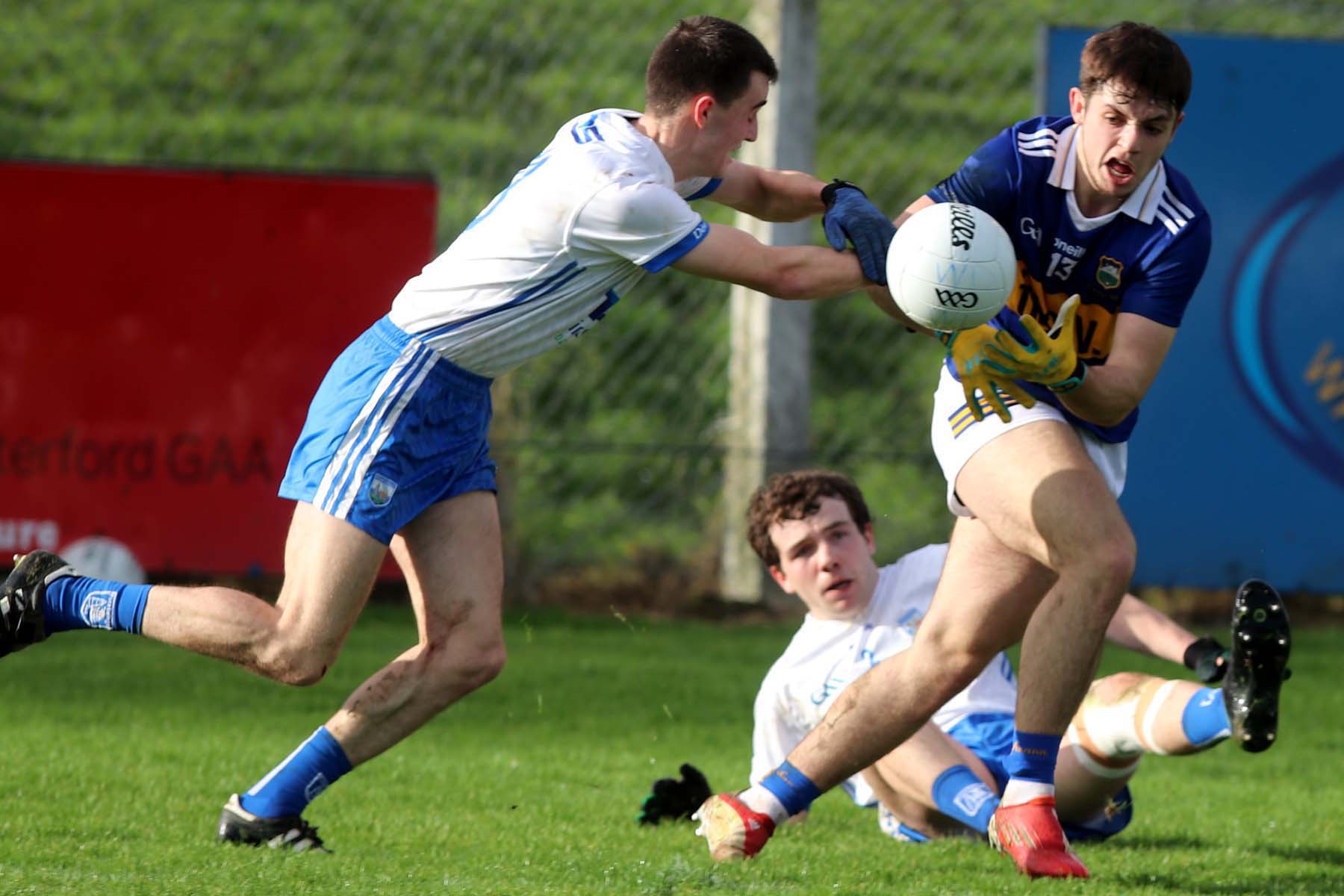 Mikey O'Shea (Mullinahone) who made his senior league debut against Waterford in January will make his championship debut this evening against the same team in Fraher Field, Dungarvan.

It has been somewhat of a topsy-turvy period for Tipperary football since their standout high of Munster championship success in 2020. Last year was hugely disappointing, with relegation to Division 4 followed by a first hurdle exit to Kerry in the Munster semi-final by 1-19 to 1-8.
This year, thus far, has been a lot better, albeit after a slow start to the league campaign. The draw against Waterford was followed by a heavy defeat at home to Leitrim and at that juncture a new-look Tipperary side seemed in real bother.
However, five wins on the bounce including away victories in Wexford Park and Kingspan Breffni earned Tipperary promotion. In the add-on league final against Cavan, the Ulster men turned the tables, winning by 2-10 to 0-15 in Croke Park.
Without doubt the standout performance for Tipperary came on Sunday, March 13 when in a must-win game in Cavan they defeated the Ulster champions of 2020 by 1-11 to 1-7. By contrast, a fortnight later at the same venue, Cavan thumped Waterford by 3-21 to 0-10.
All things being equal, the main ambition of Tipperary football at the start of the year would have been securing an immediate return to Division 3. For a team in transition that was no easy task and they did tremendously well to achieve it, considering they had lost up to a dozen players from the previous year’s panel.
An exodus of that scale presented a huge challenge to the management team, as evidenced in the fact that over the course of the eight games from Dungarvan to the Croke Park final Tipperary used no less than 30 players. The transition presented opportunities for new talent to stake a claim and many have done so admirably.

Michael O’Reilly has grown into the goalkeeping role since Evan Comerford stepped away, while this season’s debutants like Mark Russell, Mikey O’Shea, Martin Kehoe, Sean O’Connor, Teddy Doyle, Cathal Deely and Sean O’Connell have matured with each passing game.
Captain Conor Sweeney has been inspirational all through with key goals in many of the games while the other experienced players such as Kevin Fahey, Bill Maher, Jack Kennedy, Colm O’Shaughnessy, Robbie Kiely and league ever-present Shane O’Connell have been immense.
An added bonus now is the return of Liam McGrath to the panel for the first time since 2019 and his ability to take a score is a big plus. Another positive is the availability of Steven O’Brien, the towering midfielder having missed all eight league encounters.
On the negative side it appears that Mark Russell, who was excellent right through the league, is out with a hamstring injury while doubts remain also about Bill Maher (hamstring) and Shane O’Connell (hand).
Recent challenge games against Westmeath and Cork will no doubt have upped the intensity of preparation for Saturday’s encounter with Waterford.
It would seem that Tipperary are a lot more settled now than they were at the beginning of the league, and given their big improvement in form since the loss to Leitrim one would expect them to be good enough to progress. The key will be the opening 20 minutes and establishing a dominance. Not achieving that would give Ephie Fitzgerald’s side a belief and if Waterford get that momentum going and the partisan crowd behind them they would love nothing more than to drive on and upset the odds at Fraher Field.
Tipp should prevail and set up a semi-final against Clare or Limerick in a fortnight. Anything else would be a huge setback.