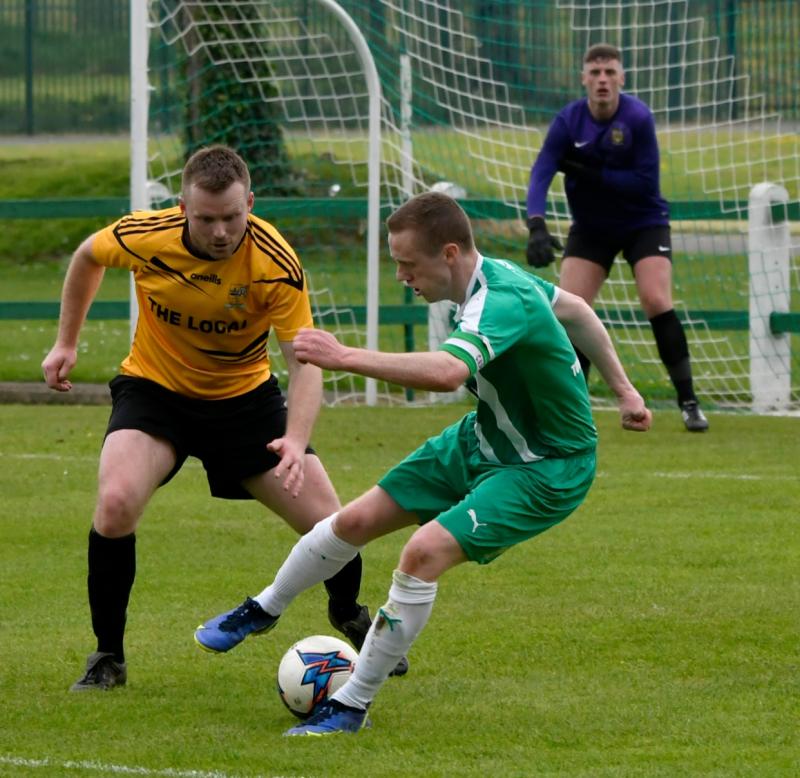 St Michael’s look to have added another TSDL League title to their roll of honour following their win on Saturday evening last against fierce local rivals Clonmel Town, in front of a large home crowd at Cooke Park.
Although still subject to an appeal, a recent decision to dock points from second placed Peake Villa meant that the visitors still had a chance to sneak a title win, they were never really in the hunt to pull that off against a home side that scored early, and seemed comfortable to see the game out after that.
The early exchanges were even enough, but the Saints carved open their opponents in the sixth minute and evergreen Jimmy Carr picked out John O’Brien with a pinpoint cross to the back post, and the striker made no mistake in putting his side in front.
But Town didn’t fold, and minutes later they were almost level when a long distance snap shot by Alan O’Donnell had to be dealt with in the home goal, where Adrian Walsh was up to the task presented.
But really that was the best chance for the visitors, with the hosts forcing saves from Evan Comerford in the Town goal on a number of occasions in the following quarter of an hour, most notably when Carr set up O’Brien again, and when Ed O’Dwyer was unlucky right on the half hour mark.

Tipperary Soccer: Game abandoned due to injury, Suirside are champions

Six minutes from the end of the first half, the home side thought they had doubled their advantage, but the goal was ruled out for a narrow offside decision.
The away side came out in the second period fired up and had the first big chance when Evan Mc Guire got some space in the area, but his shot was well saved by Walsh in the goal.
After that, the pace of the game seemed to slacken off and the home side moved more into a holding pattern of soaking up whatever pressure Town put on, while looking for opportunities to hit them on the break.
Rhys O’Regan did come close for Town in the 65th minute, but their best chance came 15 minutes from time, when John O’Brien really should have done better with an effort that he ended up just chipping softly into Comerford’s waiting hands.
In the end, the tie petered out and no more goals were added, giving the home side the title that they deserve after another unbeaten season.