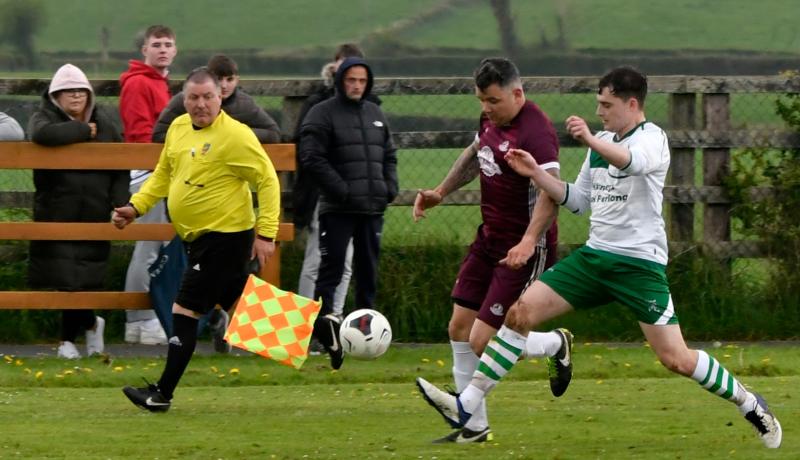 After one of the longest seasons ever in the TSDL Third Division, the destination of the title hung on the final game of the season, with the home side needing just a single point to assure themselves of not only the championship but the right to say they had won it after an unbeaten season.
And though they managed to secure that “invincibles” title, they had to come from behind and were pushed to the pin of their collar by a Clerihan team that only returned to the TSDL at the beginning of the season, but have shown that they could become a mainstay in it very soon.
This top of the table clash was witnessed by a packed house in Grange, and perhaps the gravity of the outcome was weighing heavily on the minds of the home players in the early stages, as it was the visitors who took advantage of some defensive hesitation in only the second minute of the game to open the scoring.
Despite this setback, however, the hosts eventually did settle, and in the 15th minute they almost equalised when a rasping effort by Jason Coffey went slightly over the crossbar.
Seven minutes later veteran striker Paul Kennedy thought he had levelled proceedings, only to see his effort pull slightly wide, but there was definitely a feeling that the home side were getting closer.
They finally got the goal their play deserved in the 32nd minute, when after a lightning break from the back, a whipped cross into the area found the head of Kennedy, who rose highest and planted a bullet header past the stranded Clerihan ‘keeper Tommy Morrissey.
It looked like this would be the score to take the teams to the break, but a minute before half-time Adam Quirke, who was giving a man of the match performance, found Kennedy in space and he was taken down into the Clerihan area, giving the home side a penalty.

Cometh the hour, cometh the man, as captain fantastic David Brannigan stood up and fired the ball to the net to put the home side in front and place one hand on the league title.
The second half started with both sides slugging it out and sharing a number of chances. The visitors came very close just before the hour mark when an effort just grazed the top of the crossbar and flew away from goal, and four minutes later they came even closer when they saw a shot come down off the underside of the crossbar before being scrambled away to safety.
At this stage, the home side were sitting back, soaking up pressure and looking to hit on the counter punch, and almost extended the lead with two excellent chances falling to Kennedy, who saw a shot graze the bottom of the post, and another that was offside after he got the ball in the net.
To their credit, Clerihan stuck to their task and gave themselves a lifeline five minutes from the end when they tacked on a second goal to draw the game level.
The final few minutes were frantic as the away team threw everything at the hosts to try to get that elusive goal that would have forced a title play off but Suirside stood strong and saw it out, to the delight of the team and their supporters.
In the end they received the trophy from the league committee and with an unbeaten season behind them, it cannot be said that it wasn’t a deserved win. Clerihan will join them in Division Two next season, and on Sunday’s performance both sides will be more than a handful when next season rolls around.