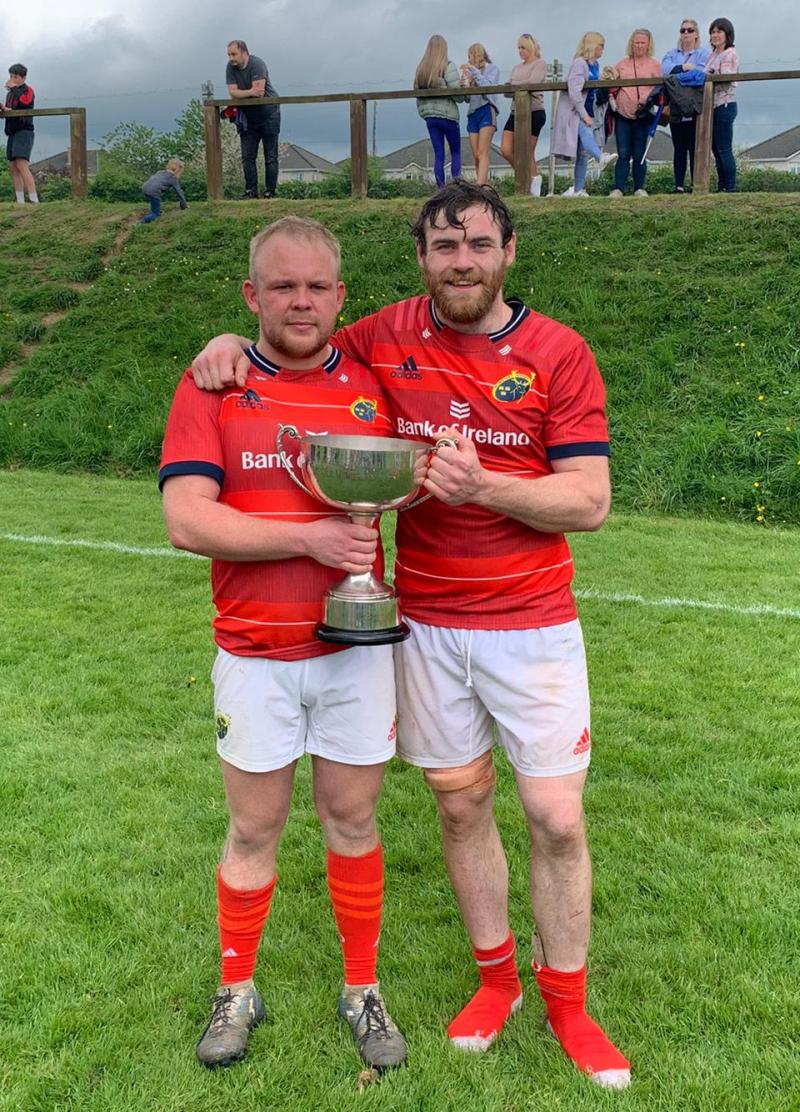 Ricky Whitney and Kevin Kinnane (captain) who helped Munster to a 39-29 win over Leinster at New Ross on Saturday last. The win enabled Munster to capture the inter-pro series.

Munster were crowned Junior Interprovincial Champions when a storming finish in the final fifteen minutes yielded three converted tries for a 39-29 win over Leinster at New Ross.
It was another proud day for Kilfeacle and District RFC as Kevin Kinnane once again played his captain’s role both on and off the pitch, to much acclaim. Kevin led out the Munster Junior team which included his club mate Ricky Whitney who played a vital role during this campaign. It was a strong Munster bench that proved crucial as Leinster threatened to take the points with an early second-half rally. Tadhg Bennett put Munster into an early lead with a penalty but a try from Wes Carter converted by Craig Miller put the home side in front. Bennett kicked his second penalty on 26 minutes and a try by Ricky Whitney his second of the campaign, converted by Bennett restored Munster’s advantage. Miller closed the gap to three points before a try from Jesse Smith gave Munster an 18-10 halftime lead.
With all four teams still in contention and harbouring hopes of a series win at the beginning of play, Munster knew that an away win was never going to be an easy task. Munster were aware that there would at some stage be a fight back from their opponents and that they had to be ready to weather the storm. At the start of the second half the Leinster team blew up a hurricane. Leinster hit Munster with three tries inside the opening twelve minutes of the second half to lead 29-18 with tries from Rudhán McDonnell, JJ McIlwrath, and David Nicholson with Miller converting the latter two. Munster’s hopes of winning and bridging the six year gap seemed to have been blown away in a 12 minute blitz. The outlook was dull and overcast for Munster and their supporters, something had to happen to break the torrential onslaught.
Some shrewd switches by the Munster management produced the desired effect the sun broke through and the clouds dispersed. Munster wrestled back control of the game, and the series, in impressive style.