Cappa' have 12 points to spare over Kickhams in final 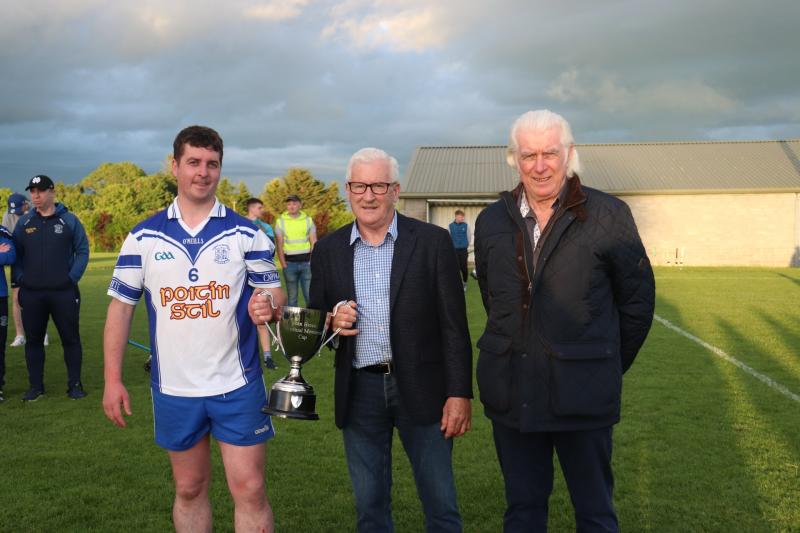 Cappawhite claimed a second-ever Maria Marron Palmers Hill Stud West Junior B Hurling League title and a first since 2016 on Monday night when defeating Knockavilla Donaskeigh Kickhams in the final in Clonoulty.

The earlier showers dispersed, as the sun shone through on an excellent surface.

In what was a repeat of the 2019 decider, won by the Kickhams men, a devastating opening thirty minutes from Cappawhite saw them amass a tally of 2-15 (2-11 from play), which helped ensure a reversal of that result and end a run of three final losses in a row in the competition for the eventual champions.
Cappawhite dominated proceedings in that first half, as they dictated terms all over the field, limiting Kickhams time and space and to a first half tally of eight points, of which five were from placed balls. The Cappawhite defence was well on top, with Ross Dunne and James Quinlan dominating midfield and their forwards were attacking with menace.

Dara McCarthy and Gearoid Lennon, along with Mikey and Sam Carmody, were a constant threat, finishing with 4-10 from play between them. In the first half Kickhams were forced to bring numbers back the field to try and curb the Cappawhite influence on the game but to little effect.

Patrick Ryan got Kickhams off the mark with one of only three points from play in the first half. Cappawhite, though, piled the pressure on and with huge accuracy in front of the posts they made it count on the scoreboard. Mikey and Sam Carmody, along with Dara Duggan, all pointed to put Cappawhite ahead 0-6 to 0-1 by the eighth minute. Dara McCarthy, along with the Carmody, added further points, while Dara Duggan was getting through a lot of work.
At the beginning of the second quarter Patrick Ryan added Kickhams' third point but Cappawhite responded with two killer blows within a minute. First Gearoid Lennon opened his account with the game's first green flag and then Dara McCarthy powered through for goal number two.

The game was now going well away from Kickhams. Conor Horgan was on target from placed balls but Kickhams struggled to make any inroads in the Cappawhite defence. James Quinlan was getting onto a lot of possession and he finished the half with two points. Cappawhite led 2-15 to 0-8 at half-time.

Cappawhite didn’t take the foot off the throttle when the play resumed, with Sam and Michael Carmody, Dara McCarthy, Gearoid Lennon and James Quinlan pointing.

Kickhams, to their credit, refused to give in. Brendan Ryan, on as a substitute, collected possession from a free that dropped short to find the net. They added further points from Orrin Jones, who was now on free-taking duty, Conor Horgan and Patrick Ryan, but were again hit with another sucker punch when Sam Carmody raised a third Cappawhite green flag.

Kickhams responded with points and an Orrin Jones goal from a twenty one yard free, only for Dara McCarthy to respond with his second and Cappawhite’s fourth goal.