Racing continues on this Friday and Saturday night 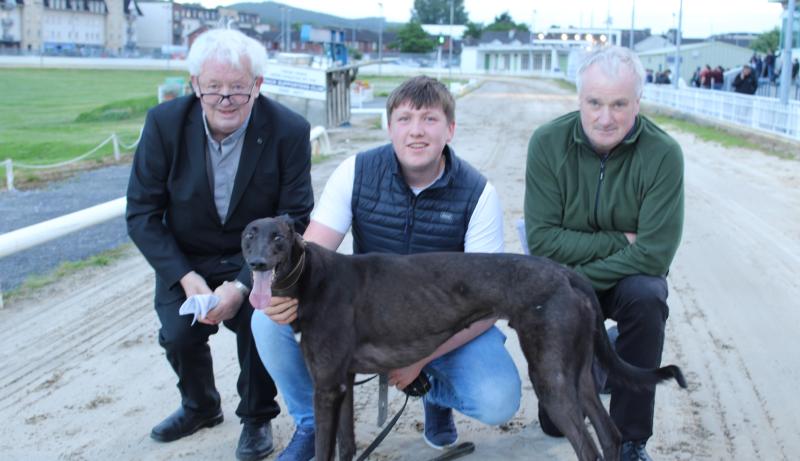 Tom and TJ Condon with trainer Adam Dunford and Leave A Message, following his impressive performance in the opening round heats of The Greyhound Supplies Unraced Stake at Clonmel track

After his breathtaking opening round performance in the National Produce Stake, Swords Rex, trained by Golden trainer Graham Holland for Barbara Lowndes from Swords, was the centre of attention in the quarter-final on Sunday night at Clonmel.
Just six spots off the track record of 27.93, he showed why he is one of this year’s talking dogs, having already won The Rural Kennels Unraced Stake at Clonmel and recently won The Kerby Memorial at Limerick. He currently being offered at 14/1 for this year’s Boylesports Irish Derby.
Running in the third quarter-final he showed excellent railing and squeezing through a tight opening bend he powered into a three-length lead as they faced the far side.
The Owen McKenna- trained (for JJ Dunne from outside Thurles) dog challenged down the far side but Swords Rex, adding to his lead, went home a very comfortable seven lengths winner in 28.23, another excellent run as his outright odds of winning this event shortened to 5/2 thereafter.
The Pat Buckley-trained Gaston Pecas, a winner the previous week when coming from behind, gave a carbon copy run in the second quarter-final as he left it late to get past the very lively Newinn Homer.
The opening quarter final, a four-dog race, with Postman Cat having been sold since the previous week absent as well as Romeo McQueen out with illness, saw Gerard Hutton’s Radical Hero, trained by Thomas O’ Donovan, make it back-to-back wins from trap five.
Locally-owned by Sean Burke and Paul Horig, Mustang Jet showed a very strong finish when closing hard on the leader late on, but the line came too soon and he had to settle for the runners- up spot.
The Murt Leahy trained for John Coleman Droopys Nice One, runner up the previous week to the lively Halo, finished like a train to snatch the final quarter final by half a length on the line from the Eddie Ryan-owned Serene Tiger.
The opening quarter final of The Kieran Purcell Guys and Dolls Stake saw local owner Nigel Quinn from Clonmel land the spoils when Bloodsweatnbeer dominated from start to finish in 28.76.
Abigails Power, the winner the previous week in the opening round, took the runners-up spot for Roscrea owner Abigail Morrissey.
Gearoid O’Brien’s Dromana Tornado also showed excellent early from traps to make it a trap to line win in the second quarter final, with New Inn owner James Heffernan taking the runners-up spot as Flashy Tornado finished strongly.
Billy and John Dunne’s Ballyhimikin Joy, using the rails to her advantage, took the third quarter-final, with the Myles Family from Old Road, Cashel taking the runners-up spot with Happy Together getting through.
The stake favourite Country Girl, owned by John Meelam and trained by John Byrne, did not disappoint her supporters and justified her favourites tag with another fine performance in 28.74.
Friday night last saw the opening round heats of The Greyhound Supplies Unraced Stake, running in conjunction with the Produce Stake. Thurles owner Maria Kennedy saw her youngster give a very professional run in the opening heat, winning in 28.75, as the Graham Holland-trained Fabulous Lynx denied the long-time leader to take the second heat in 28.77.
Fr Tom Condon’s Leave A Message, trained by Adam Dunford, produced the best run of the opening round with a very comfortable win in 28.62, while a very determined Lady Ohtheresky, owned by PJ Bohan from Templemore, dug deep to hold off a late challenge and take the final heat.
The major uplift at the track is proving very beneficial, with large crowds attending and enjoying excellent racing, quality food and drink in comfortable surroundings. Seeing some of the top greyhounds in racing in Ireland at present is a real treat for the Suirside patrons and looking forward to the Irish Derby later in the year, no doubt plenty of these will be on show once again. 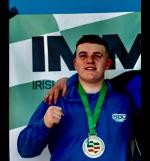